Showing posts from September, 2013
Show all

Over the years I've exchanged links and photo sets with many sites. I am often asked to trade banners and/or photo contribution sets with other sites. If this is something that interests you, this F.A.Q. blog entry is for you. Frequently Asked Question:  Can I exchange banners with Soles of Silk ? I am always up for a banner exchange, although maintaining a links page can be one of the hardest things on the site. If you're interested in exchanging banners with Soles of Silk , I do ask the following be true of your site: Your site must contain original content Your site must contain foot fetish content Your site can contain nudity/adult content, but the banner you supply to be posted on Soles of Silk cannot Link farm sites will not be accepted Yahoo Groups and social media page links will not be accepted A reciprocal link to Soles of Silk must be placed on your site Banners are only placed on the links page of Soles of Silk , unless you're a contributor. Cont
Post a Comment
Read more

If there is something that every foot fetish site needs it is models. In this entry to the Frequently Asked Questions (F.A.Q.) blog series, I'm going to tackle one of the questions I get the most about the models. Frequently Asked Question: How do you find your models? There have been numerous ways in which I've found my models for Soles of Silk . I was only going to go over the most successful way here, but I've decided to go ahead and list all of them instead. Friends/Coworkers/Classmates Friends of friends Online portfolio sites Social media Models from other sites Mindee has posed for me regularly since the site opened. Method #1: Classmates/Coworkers/Friends Back before I even ran Soles of Silk this was my main method. Anyone who knows me tends to know that I have a foot fetish. And most of them know about the site. When I was in art college my artwork would focus on female feet a lot, so I'd ask my fellow classmates to model theirs.
Post a Comment
Read more 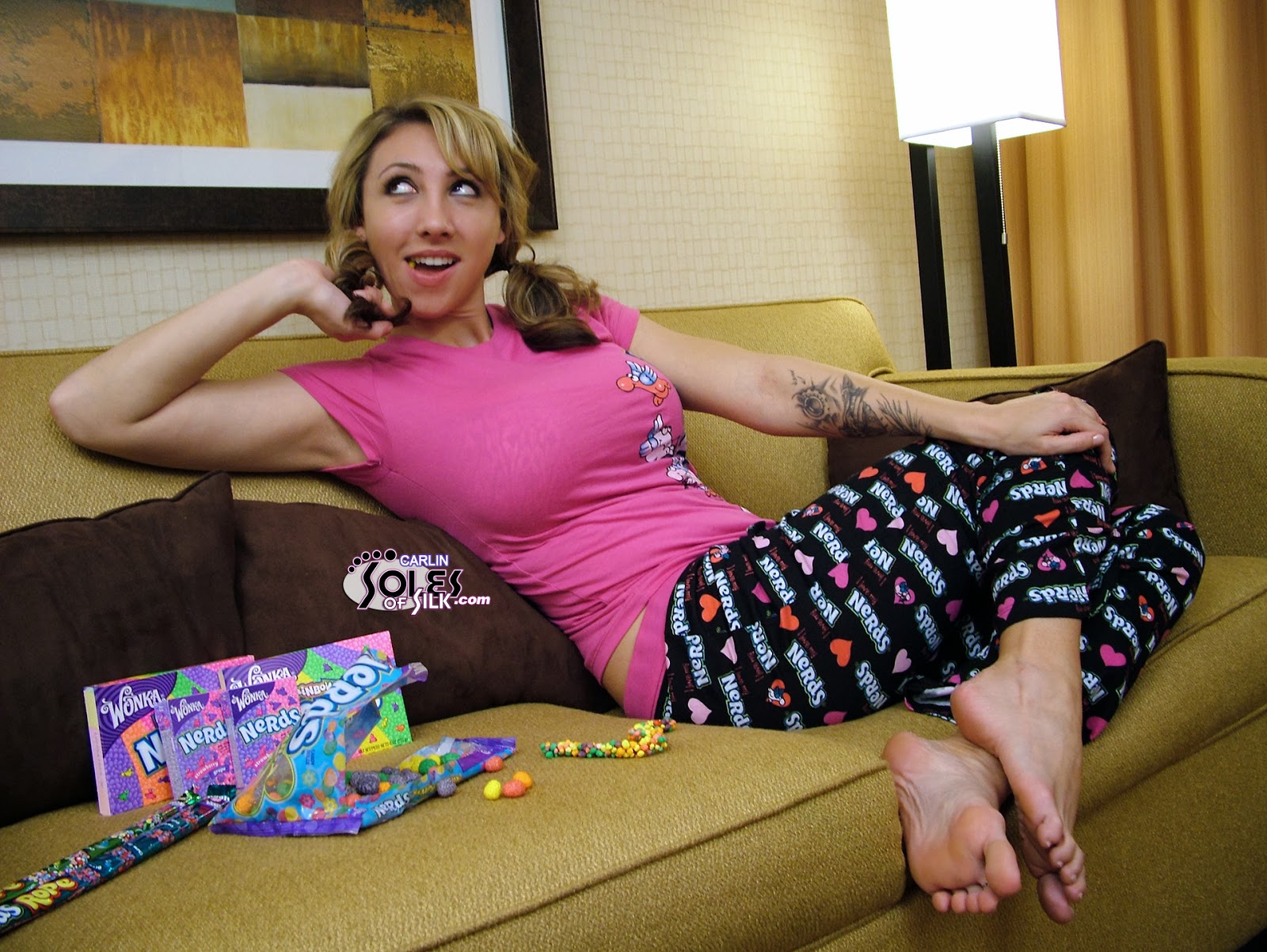 This week's update includes the following items: Photos  - Carlin is such a nerd, so what better way to show that off than to put her in a Nerds pajama set and shove a bunch of Nerds candy between her toes? (43 images) Photo Sample 01 Photo Sample 02 Photos  - Jessie pulls off her Nike Shox and white socks while out at the park, leaving little sock fuzzies between her long toes  (52 images) Photo Sample 03 Photo Sample 04 Video  -   Amelia's feet are super sweaty and are about to get super smelly when she shoves them in her pink and black Vans on a very hot day  (144 MB - 1080p HD) Video Capture
Post a Comment
Read more 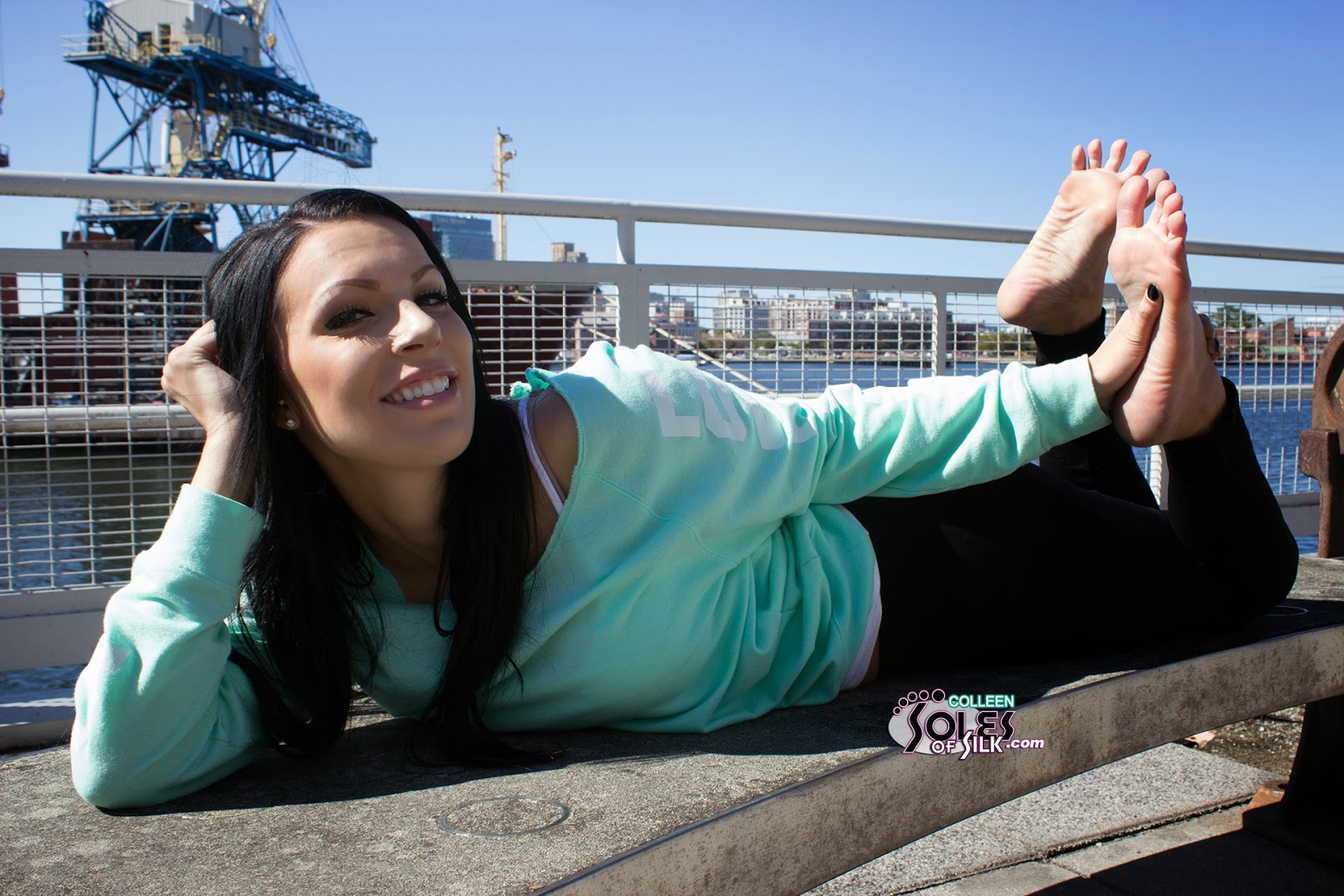 Ever since our last shoot (see blog: " Today's Shoot - Colleen "), Colleen and I have been talking about doing another shoot. Our initial plan during our last shoot was to do three sets, but it was just too hot and we decided to just save it for another day. Well, today was that day and we shot two sets, not just the one we missed out on last time. I picked up Colleen around 1:30 p.m. and we were on our way downtown. Mindee had showed me a neat location during our last shoot (see blog: " Today's Shoot - Mindee ") and I decided to head back down there for at least one of Colleen's sets. When we arrived no one was around at all. We walked the entire waterfront area and decided on a spot with a unique view. Two benches, made from recycled ship parts sat side-by-side on a promenade where you could see the nearby sugar plant. Docked at the sugar plant was a large ship where cranes were busy offloading product from its compartments. For this first set
Post a Comment
Read more 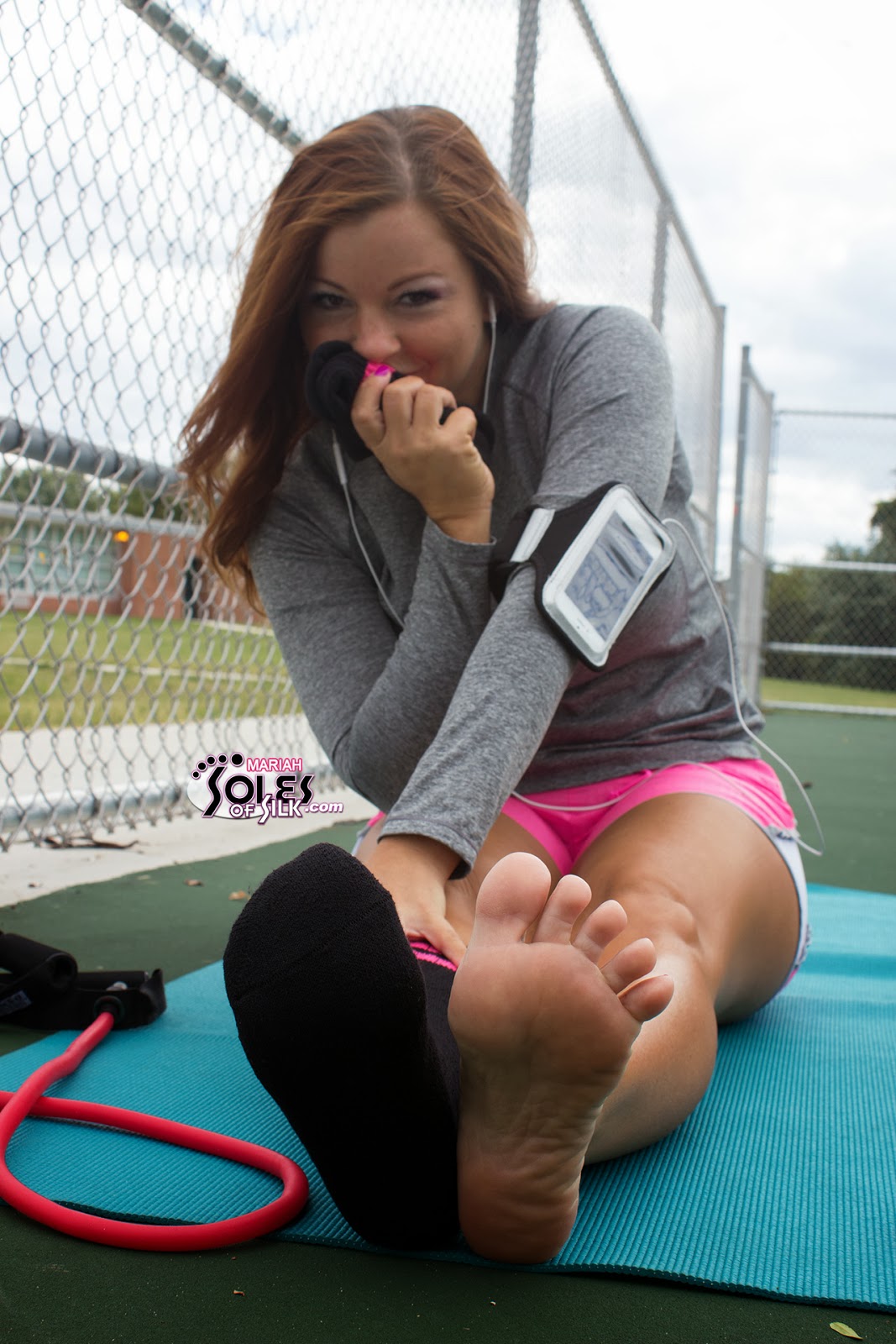 Today was the day. Today was the day where I had two models who haven't shot for the site in years. The first model was set to be  Cierra , but she was unable to shoot. The second model was Mariah , who hasn't had a set posted on Soles of Silk since September 2006.  It's hard to believe that it's been seven years since Mariah posed for the site. I actually looked it up because we both wondered how long it has been while we were shooting today. My research showed that her only published set was uploaded to the Soles of Silk server on September 8, 2006. Talk about a comeback, and what a comeback this turned out to be! If you follow Soles of Silk on Instagram (@SolesofSilk) or Twitter (@SolesofSilk), then you probably have already seen the early previews of the sets Mariah posed for today. She's been getting quite a few likes, comments, retweets, and favorites between the two social media sites. For the rest of you, however, this blog will be your first view
Post a Comment
Read more 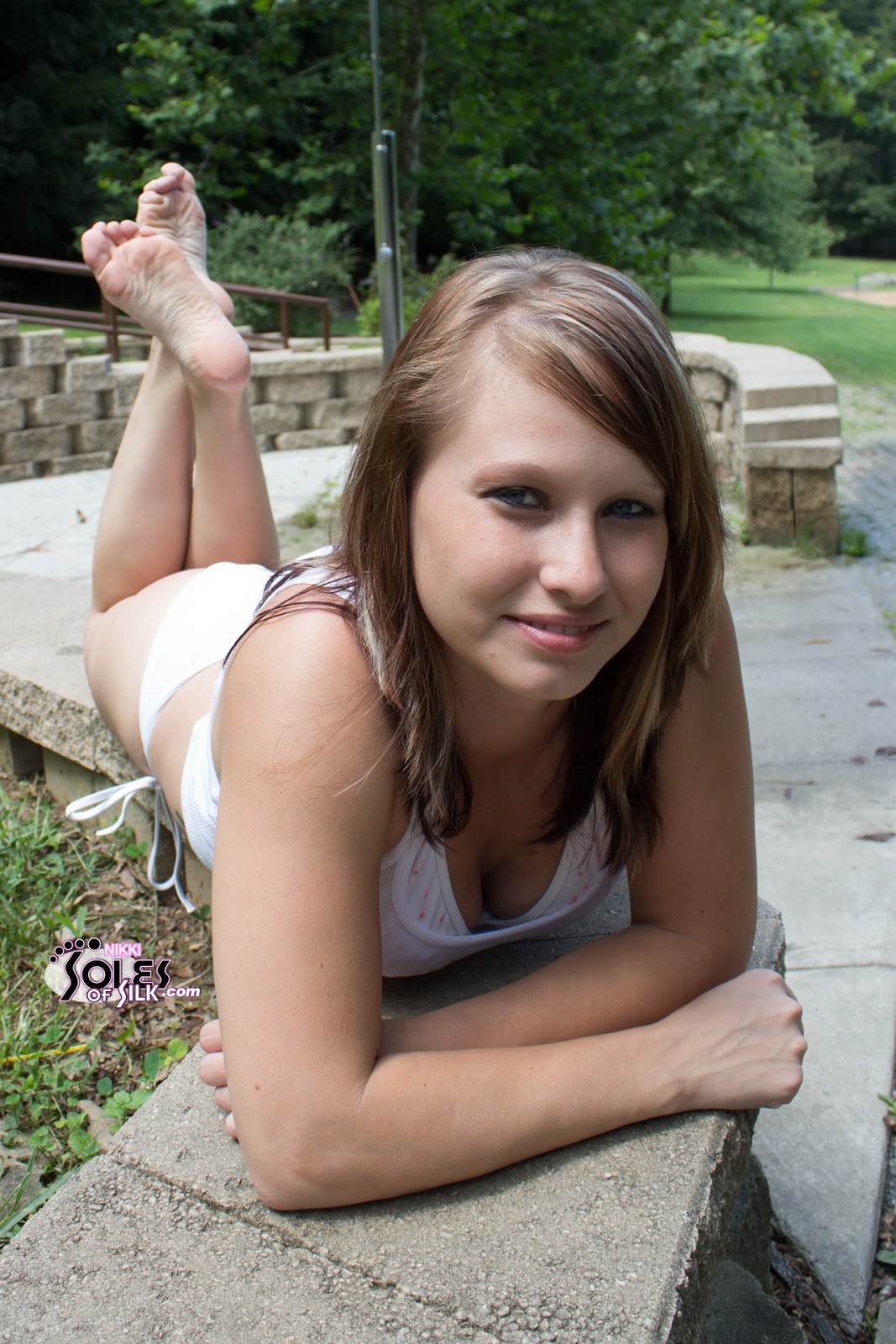 This week's update includes the following items: Photos  -  Nikki shows off her wet feet under a very cold shower at the beach (66 images) Photo Sample 01 Photo Sample 02 Video  -   Ashlyn pulls off her sandals and wiggles her toes along a pathway at the park  (137 MB - 1080p HD) Video Capture Download (Skulls)  - 1 new poster of   Mindee  has been added to the Skulls section of the Downloads area Poster
Post a Comment
Read more 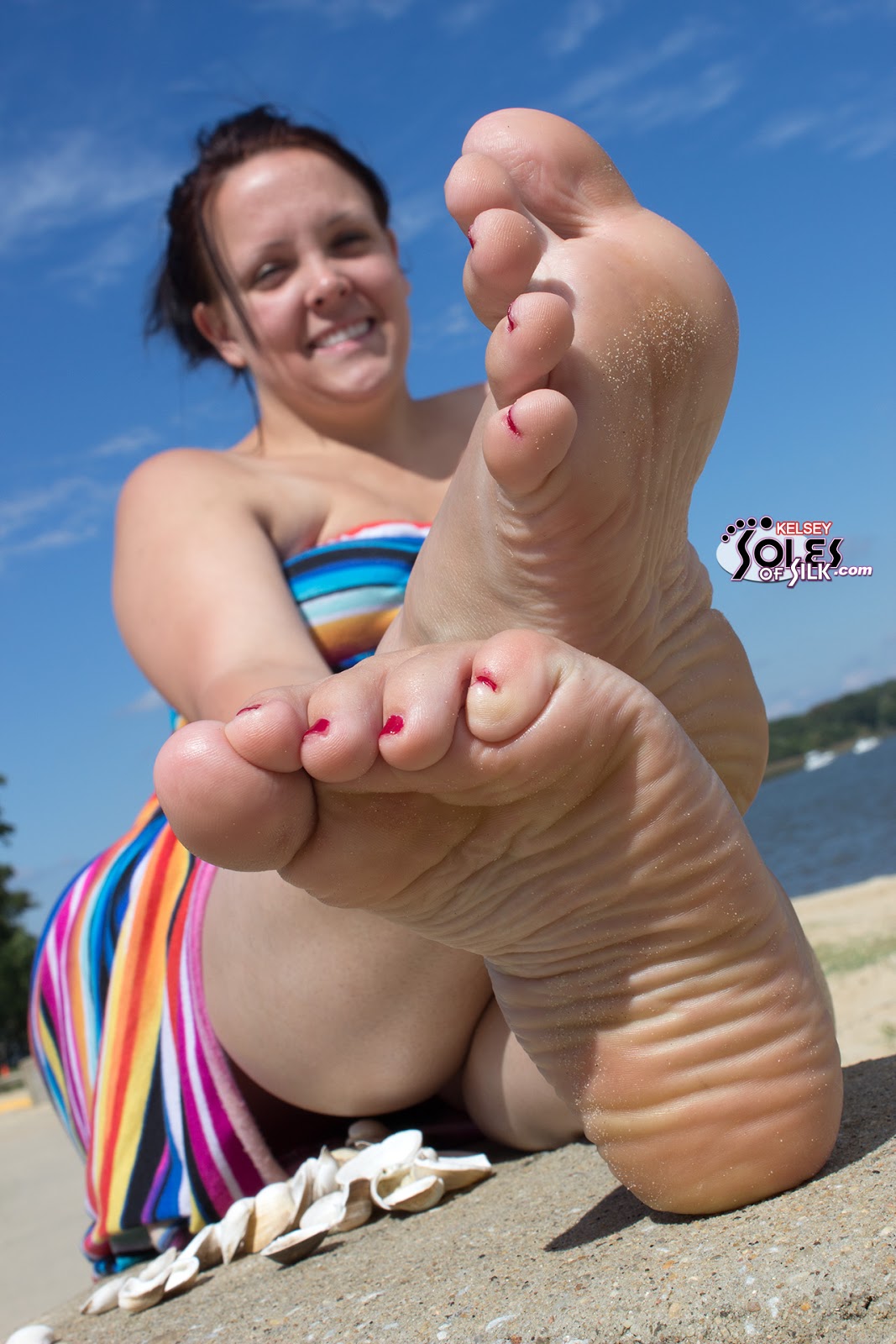 In the blog " Upcoming Soles of Silk Shoots " I posted at the end of last week, I made mention of more than a dozen models who I've been planning shoots with. While some of those plans have already changed in a matter of days, the first model on the list, Kelsey , posed for two sets today. Kelsey and I had been talking about setting up a shoot for weeks. We never made plans, but she told me to pick a Monday at some point and she'd try to be available. Well, with so many of the models this month moving their days around, today was open and we decided to go ahead and shoot. The Weather app on my iPhone was calling for rain today. When I woke up this morning, the ground was wet, but it was not raining anymore. I checked my phone again and it looked like the rain was moving away. Moments later Kelsey texted me and said that she needed to wait until around 1 p.m. to shoot. That actually worked out better as by then the rain was supposed to have moved completely throu
Post a Comment
Read more 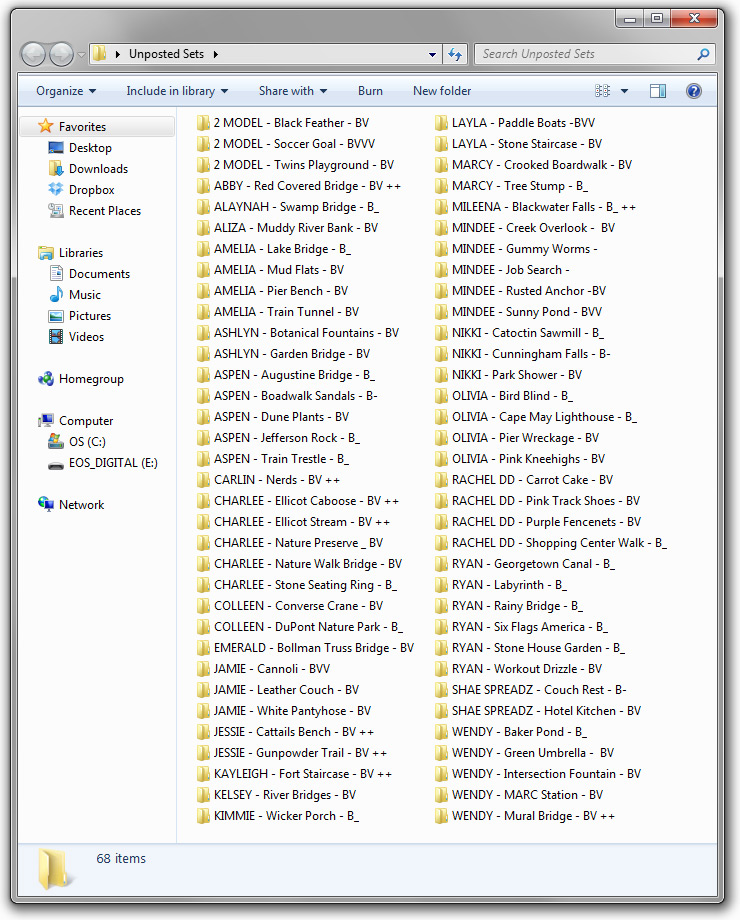 It's been quite a while since I've posted a blog about some of the upcoming shoots that are on the horizon. And even though my original plan was to slow down by September, my upcoming schedule of shoots says otherwise. And if you're wonder why I would be slowing down, let me explain. I've always enjoyed shooting outdoors. While I'm not opposed to indoor sets, I love finding unique locations for my models to pose. I aim to make each and every set as different as possible. Obviously some sets are better off being done indoors, but my preference is to be outside. Since the weather in the Baltimore/D.C. area can tend to get quite cold once winter sets in, I always shoot a bunch of extra sets before the fall. This year, however, I've gone above and beyond shooting enough sets to last through the winter! As you can see by the screen shot above, I current sit on 68 sets - none of which have been posted. Many of these you've seen teased in my blogs about sh
Post a Comment
Read more
More posts
Follow @solesofsilk