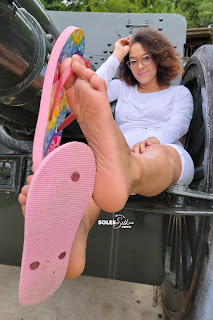 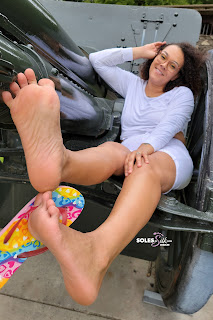 Video Clips - Ava knows how much I love her sweaty, big feet, so she once again frees them from a pair of sneakers without socks (232 MB - 1080p HD)

Allie's back! Today's shoot marks her first new sets of 2022 and if I'm being honest, I missed her and those adorable size 5's so much! Allie has been one of my most dependable models over the last two years, so it's great having her back.

Originally, Allie and I made plans to meet to shoot last week. With it being the end of September, I wasn't sure if the sunlight would be ideal for the hour she was open. We talked about it, nixed those plans, and rescheduled for today. We couldn't have asked for a better day either. There was a light breeze, and although mostly cloudy when we began, the sun did poke out for the most part.

Since Allie had plans later in the afternoon, we decided to meet up a little before noon to get underway. We lucked out that our desired photo location was open to use without a person in sight. We've struck out in the past with showing up to places only to find them overly crowded. We did have to find another place to shoot the second set, but that was only because we didn't have time to waste to see if those spots would open up. Now, onto the sets! 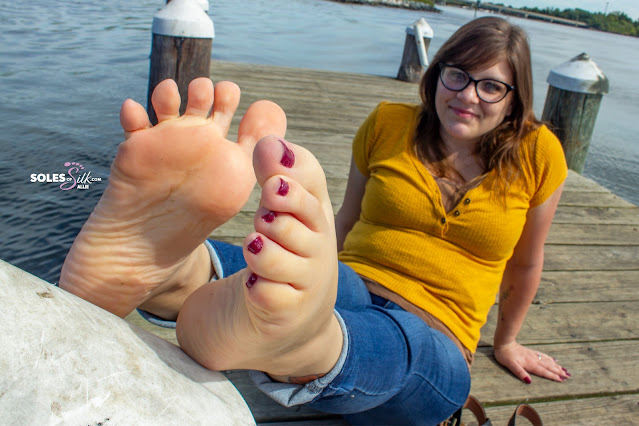 While looking online for some possible locations yesterday, I found a waterfront park close to several bridges. One of those bridges was also a drawbridge and I really wanted to use that spot, if we could.

I arrived at the park a few minute before Allie and her boyfriend. I walked around and noticed the pier to be empty. No one was fishing, which is usually what deters me from shooting on some of the ideal waterfront spots I've found over the years. That wasn't the case today and when Allie arrived, we claimed the pier and got things underway. 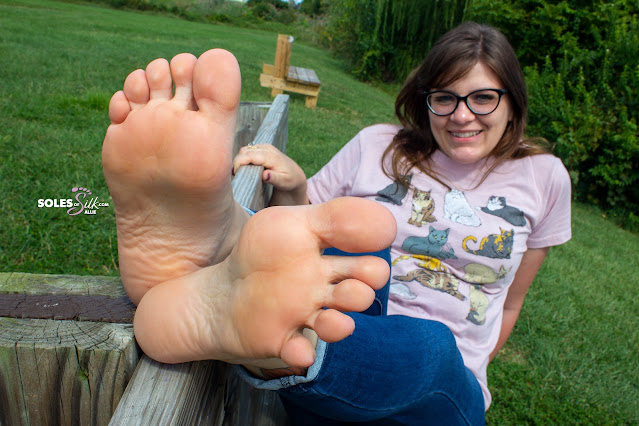 After finishing up the first set, we saw a few families throughout park. They were either in or close to the other spots I thought about using for a second or third set. Not wanting to wait around to see if they'd eventually move on, we found another park not too far away from us and made our way there. I didn't want to waste our time.

This second park was not on the waterfront, but it did feature a large pond. I decided not to feature it in the background at all since Allie has done quite a few waterfront locations since her 2017 debut. She agreed with that sentiment and we kept things to a bench about 50 feet away from the pond.

While this set was very simple, I did get a bunch of good shots of those soft soles and cute toes. And if you like flats, Allie started off wearing a pair in this one. I figured I'd share that since you can't see them in the sample photo above. Oh, and sandals were in the first set. I forgot to mention that when talking about the first set. You can kind of see them sticking up in the bottom right area of that first sample shot though.

With having to relocate to the second park and walking around that area to find where we wanted to shoot, we managed just these two sets today. Don't worry though, these surely won't be the only two she shoots in 2022. Now that Allie's back, I'm sure I'm going to be seeing a lot more of those small feet again. Lucky me! And of course, lucky you since she lets me photograph them and share those photos with all of you.

Kelsey and I have not had the best luck in 2022 when it comes to rain. Both shoots this year have saw rain in the forecast and we've had to adjust our plans for both days. Thankfully we didn't cancel either day and made the best of both situations. Seriously, both shoots resulted in some of my favorite sets I've been able to shoot this year. Maybe rain is our good luck charm?

If you missed Kelsey's return in July, her first shoot since 2016, be sure to read, "Wednesday's Shoot - Kelsey." We managed four sets that day, squeezing them in before the skies let loose.

Yesterday's shoot had us waiting for the rain to finish instead. The forecast said the storms would move out of the area by 2 p.m. That left us a few hours to see what we could come up with. I didn't have any places or themes in mind, unless you count the muddy set. I joked with Kelly in the days leading up to the shoot that she could do one of those if the rain decided to stick around all day. Even though that wasn't the case, there was plenty of mud puddles left behind in its wake to make it happen.

Stomping in a mud puddle wasn't the only childish thing Kelsey got to do yesterday either. I joked half-way through the shoot, telling her, "First you got to play in traffic. Followed that up by goofing off on a swing set. Then finally, you stomped your bare feet in a messy mud puddle."

Kelsey laughed and rolled her eyes. I wasn't wrong though. And just like her, I felt like a big kid encouraging her to do all these things and laughing constantly throughout the day. That's something I've always loved about shooting my friends. We can go out, find some cool place to shoot, bullshit, and have a good laugh all while shooting some awesome photos. It truly feels like we're hanging out for the day.

Speaking of awesome photos, it's time for me to show you the three sets we managed to do yesterday - the day Kelsey got to be a big kid: 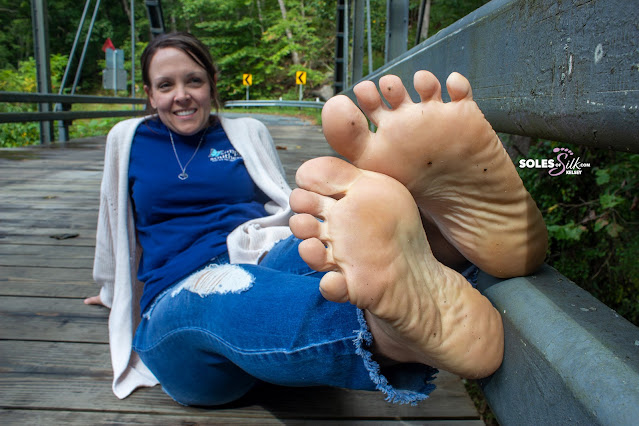 Yesterday's shoot location was a park neither of us had been to in years. The park is quite large and features a long winding road running through it. The road runs alongside a creek at the base of some small mountains and is quite scenic. It was on that road that we spotted our first location - a one-lane, wooden deck bridge. We parked at a small pull off area near by and saw the bridge didn't get much traffic at all. It was also long enough for us to shoot in the middle and then move off to the side if a car did approach from either side to cross.

I tell you, this location was so awesome. I shot photos of Kelsey all over the bridge - from the middle, the barriers along the sides, and even on the steel supports at one of its bases. We also thought about going down under the bridge, but the means to get to the large rocks slightly down creek didn't look easy to traverse. While it was doable, I wanted to use that time to do a third set instead of using up a lot of our time to get in a few extra shots in this one. Maybe we can go back one day and do another set on the creek with the bridge in the background. Well, that is if it still exists. There was a road closure sign posted next to the bridge for early October. Not sure if it's being removed. If so, then we truly lucked out. 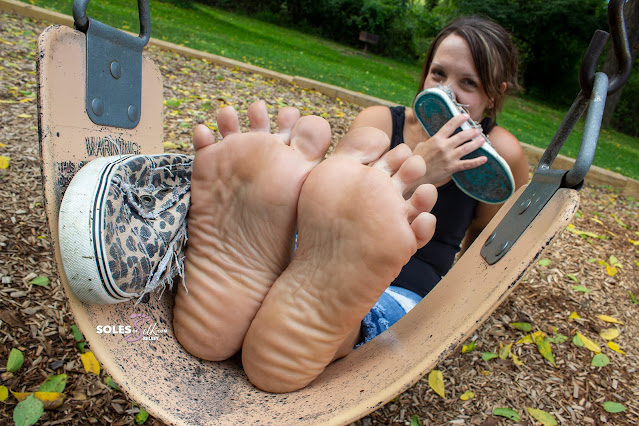 After wrapping up at the bridge, we went back out on the road and kept driving further into the park. We saw a parking lot with a pavilion, playground, and access to the water. There was one car on the entire lot and he was leaving. We pulled in and I had a look around. There was an old playground and plenty of mud puddles next to numerous picnic tables. We'd be all alone, so we decided to go ahead and do our thing.

At first I wasn't sure about using the playground. Kelsey shot on a playground back in July, but it was one of those more modern plastic ones. Well, this one was old style, built from wood and metal. It also had swings, something the one we used before did not. So instead of shooting on the sliding boards and such, we focused on one of the wooden platforms and those swings.

It didn't take me long to realize just how different these two playground sets truly are. This might be my favorite of the three sets from yesterday too. The shots of Kelsey on the swing, sticking her feet out are just so cute. Then there's the ones with her feet propped up on the swing, like the sample above. Seriously, I love those shots so much. 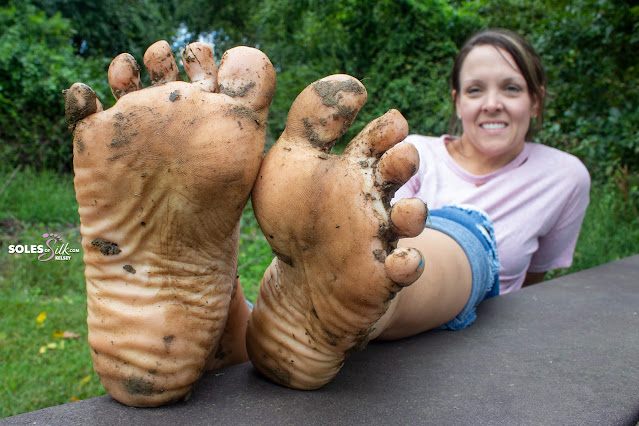 And finally, the one set I teased above - the mud stomp. Numerous times throughout this set Kelsey either said, "eww," "yuck," or "gross." Still, she walked those plump piggies right into the mud puddle without hesitation and then wiggled those oinkers with a smile on her face. I'm telling you, she had fun doing this, no matter what words she uttered throughout.

Naturally I saved this set for last. I always bring large bottles of water, towels, and lotion with me to every shoot. It's for sets like this. Still, I've learned that you want to save these sets for the end. Mud likes to get in every wrinkle, the spaces between toes, and in the crevices along toenails. On the spot clean ups never get it all, no matter how meticulous the model or I am, washing her feet. Same goes with messy food sets.

With these three sets above, Kelsey is currently now in the lead with seven sets for the end of the year Star Model rankings. Theres's still several months to go, but guess what? We're talking about shooting a few more this coming Tuesday. I'm hoping for another three, but I won't mind doing a forth or even a fifth if she has the time. There's no rain in the forecast either. At least not yet, anyhow. If these last two shoots are any indication, no matter what, we're going to come away with some good content for Soles of Silk that you're going to love. I'll be sure to share that with you all when we do.

Photos - Carmella makers a return, showing off her petite feet on the ruins of an old bridge abutment for some trolley tracks (59 images) 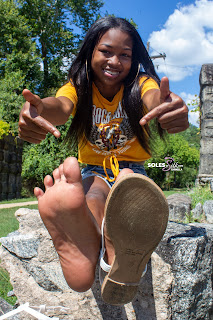 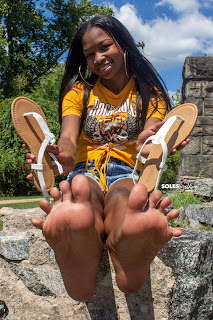 Video Clips - Abby's soles are so slippery on top of being oh so soft, as she pours more and more baby oil between her toes and down her wrinkled soles (220 MB - 1080 HD) 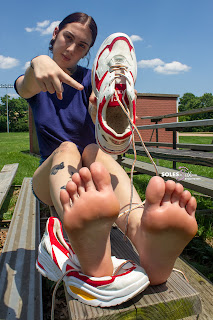 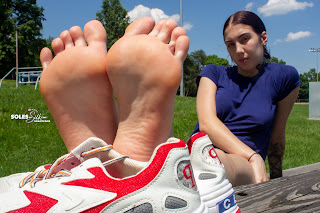 Video Clips - Mindee takes out her frustrations on some squishy blueberries, all with a smile on her face (221 MB - 1080p HD)