With all the Top 10 lists I've been doing as I wrap up 2014, celebrating the site's first 10 years online, I decided it would also be nice to dedicate a blog to the Wu's Feet Links feature model galleries. In 2005 Wu asked me to do the the site's first feature set. In July of 2014 I would do one dedicated to his memory after we learned of his passing a few months earlier. All in all, nine different sets and 10 different models have appeared in a Wu's Feet Links feature gallery for Soles of Silk since the site opened.

Putting this list together was very hard. These are some of the best sets I've done since I started Soles of Silk back in 2004. I kept them off the yearly Top 10 blog entries as I felt like I'd be partial to them. Sticking them all together here didn't make things any easier, however. By no means are any of these sets bad. This is almost like ranking Hall of Fame players against each other. You just can't go wrong with any of them.

With all that being said, here is how I rank the first nine Wu's Feet Links feature galleries from Soles of Silk: 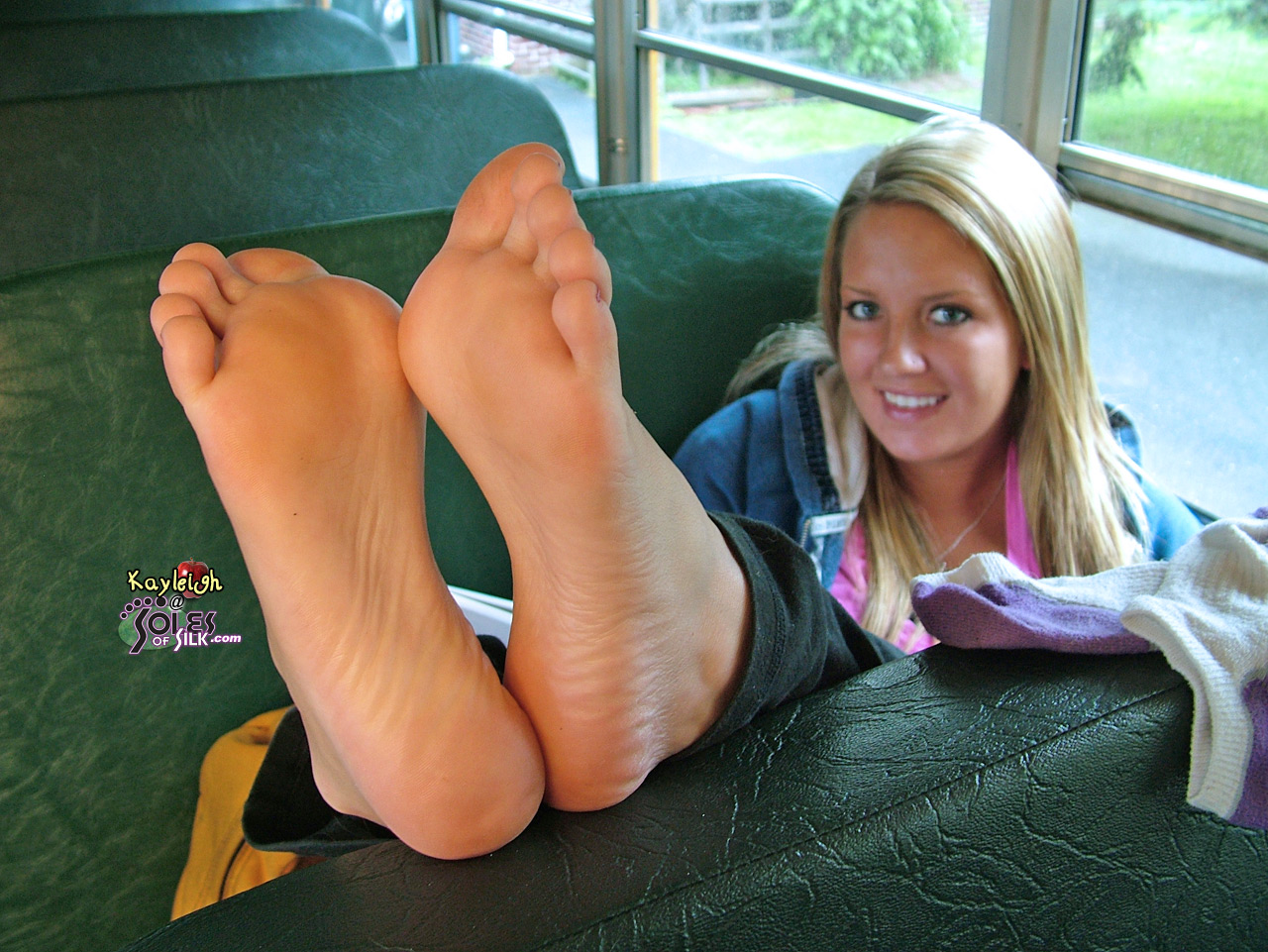 I was so happy that Kayleigh would be representing Soles of Silk in 2012 as she was on a tear with amazing sets and her fan base was growing with every update.

When I mentioned the whole idea to Kayleigh and told her how honored I am each and every time Wu asked me to take part, she was flattered. Luckily for us we had a few months to come up with a theme that was unique.

Since Kayleigh was slated for the June feature we decided to go with a "school's out" theme. Her grandmother is a bus driver and we were able to hop on the bus during one of her breaks to shoot the set. The weather, however, wasn't on our side as there were a ton of clouds and rain falling. We didn't get wet inside the bus, but I actually had to bring in some indoor lighting to the bus. We made it work though and even put a little ode to Wu himself on the back of her binder. He loved that! 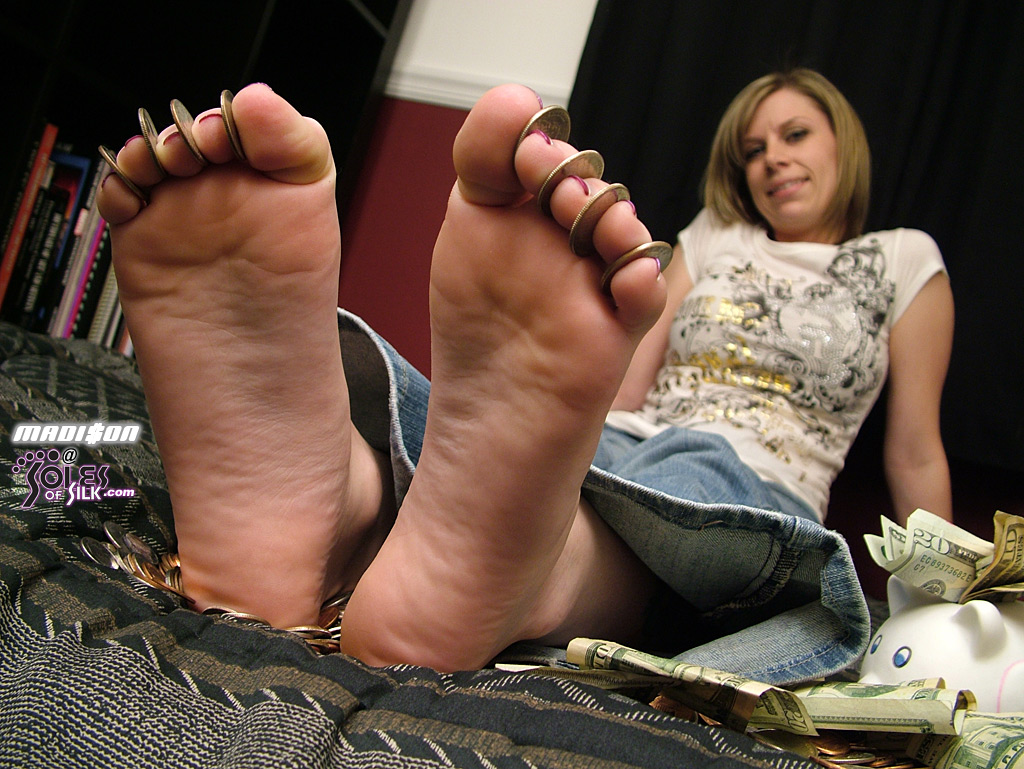 
When Wu picked Madison for the 2008 Soles of Silk feature set on his site I couldn't wait to tell her. Since the site began in 2004 no model had posed for more photos at that point than Madison. She was very much my site's MVP.

We toyed around with an idea for the set for a few months and then came up with a piggy bank idea. With the whole piggy term referencing toes, we thought it was a no brainer. Add in the fact that the piggy bank I found read "shoe fund" on the side of it and it was just perfect. 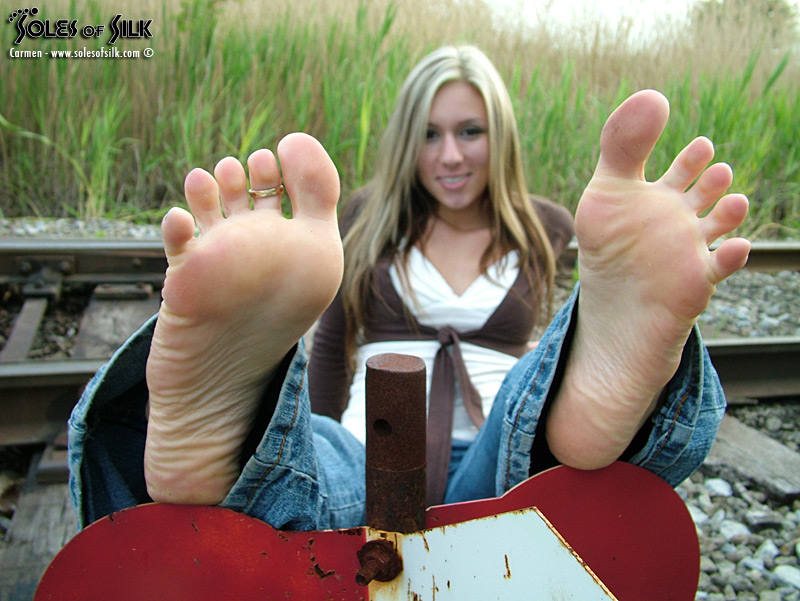 
This set is meaningful on the fact that it was the first feature set I did for Wu alone. He asked for the model to be Carmen as she was one of the most popular on the site in its early years.

He let me pick the theme, but asked me to have Carmen wear blue jeans and paint her toenails blue. Those aspects of the set were done for a fellow Wu's Feet Links Forum member who was sick at the time. Wu thought it would be nice to put two things he loved very much into the set. So that we did!

Carmen and I originally decided to do the set on some trains parked at a train yard, but we were quickly chased away by a security guard. We left the grounds and used some nearby tracks instead. There was a switch box on the ground that we made use of that allowed her to stick her feet up in the air for amazing sole shots like the one above. 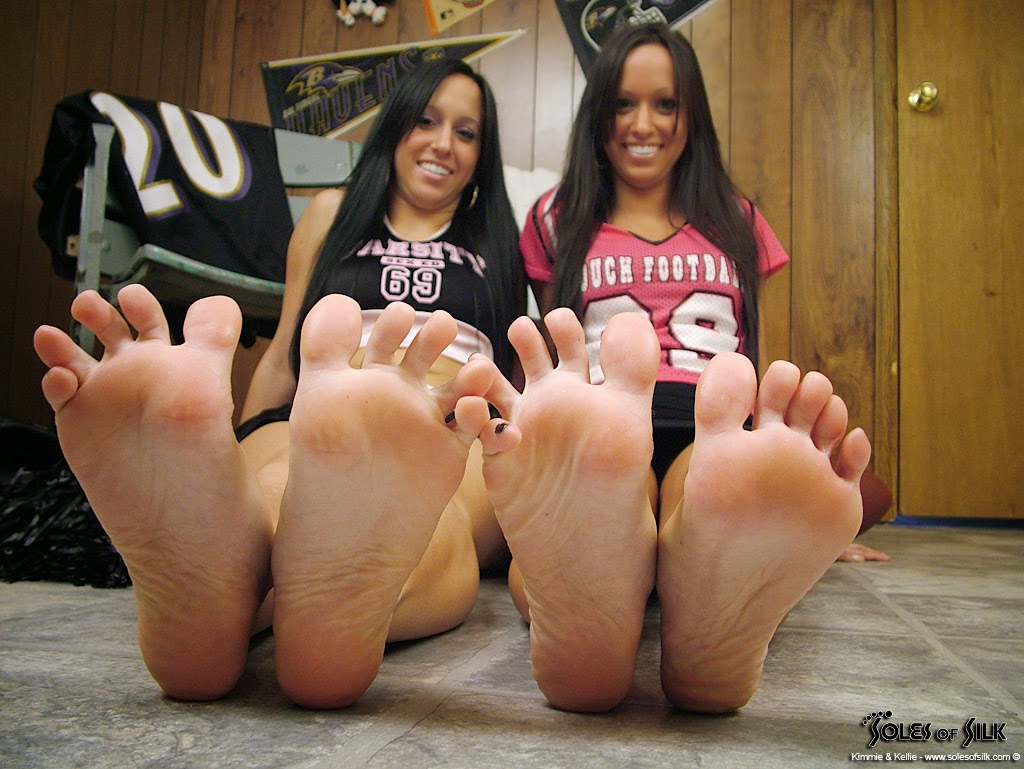 At the time the twins were two of my most popular models and Wu asked me if they'd be up for doing a football themed set - something he liked doing around the time of the Super Bowl. I told him they would be up for whatever and I'd make the set memorable!

When I submitted this set to Wu he was speechless. He told me the set was one of the best ones he ever saw me do and he was glad to have it on his site as a feature set. It was also the last time he asked me for anything specific in a set - always telling me to use whatever creativity I had instead as I always impressed him with what I submitted. 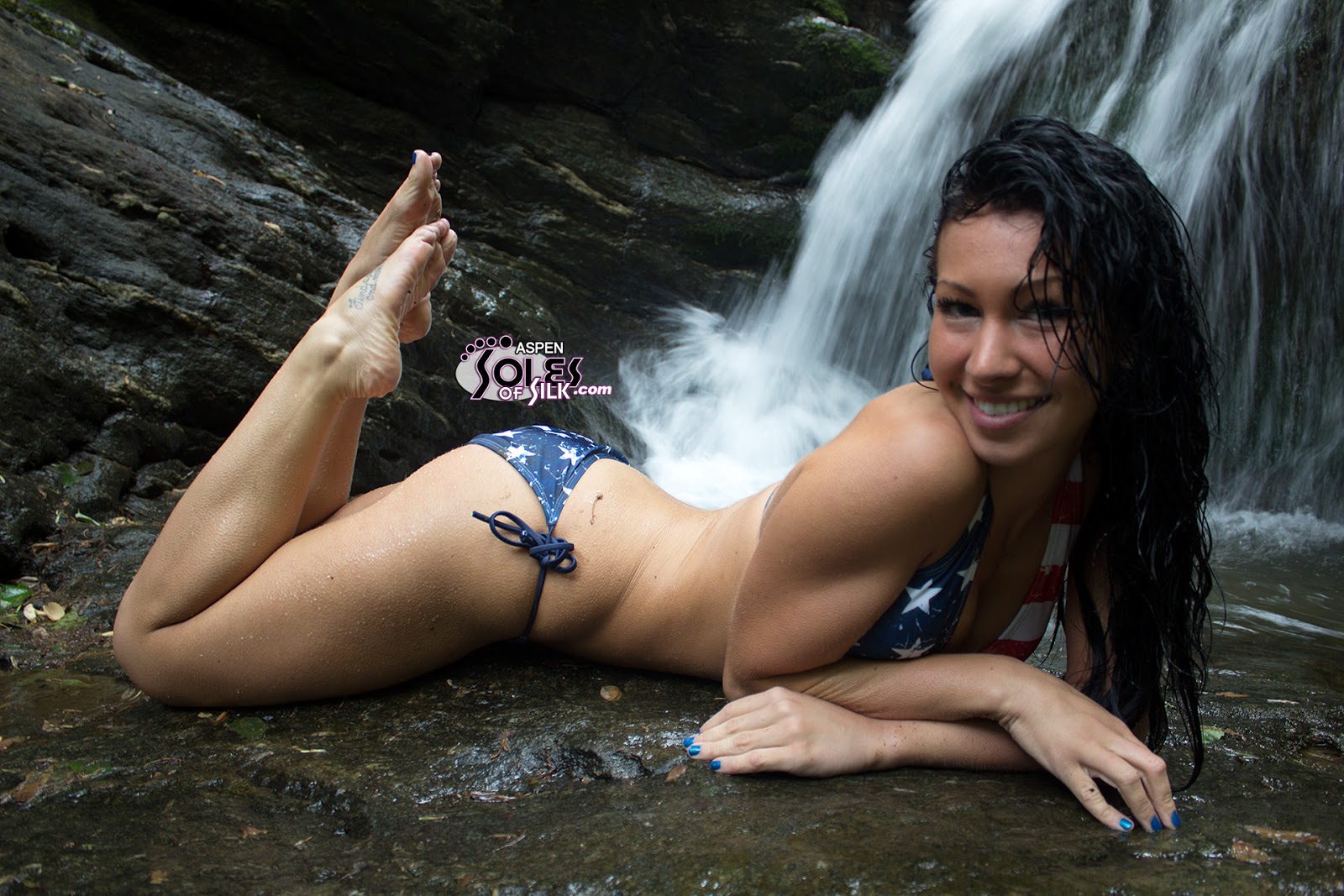 
Right off the bat I will say this is probably the most artistic photo shoot I have ever done... period! So how is it #5 on the list? Well, in hindsight the set was huge, but there were quite also a few non-foot shots in there too. Still, people loved seeing Aspen in her American Flag Bikini.

This set was done on my birthday in 2013 and was one heck of a way to spend it. Aspen and I had planned a few other things that didn't work out, even striking out on a location we had wanted to use for this set that very day. That turned out to be a blessing in disguise, however, as we went to this waterfall as a last ditch option and instantly fell in love with it. 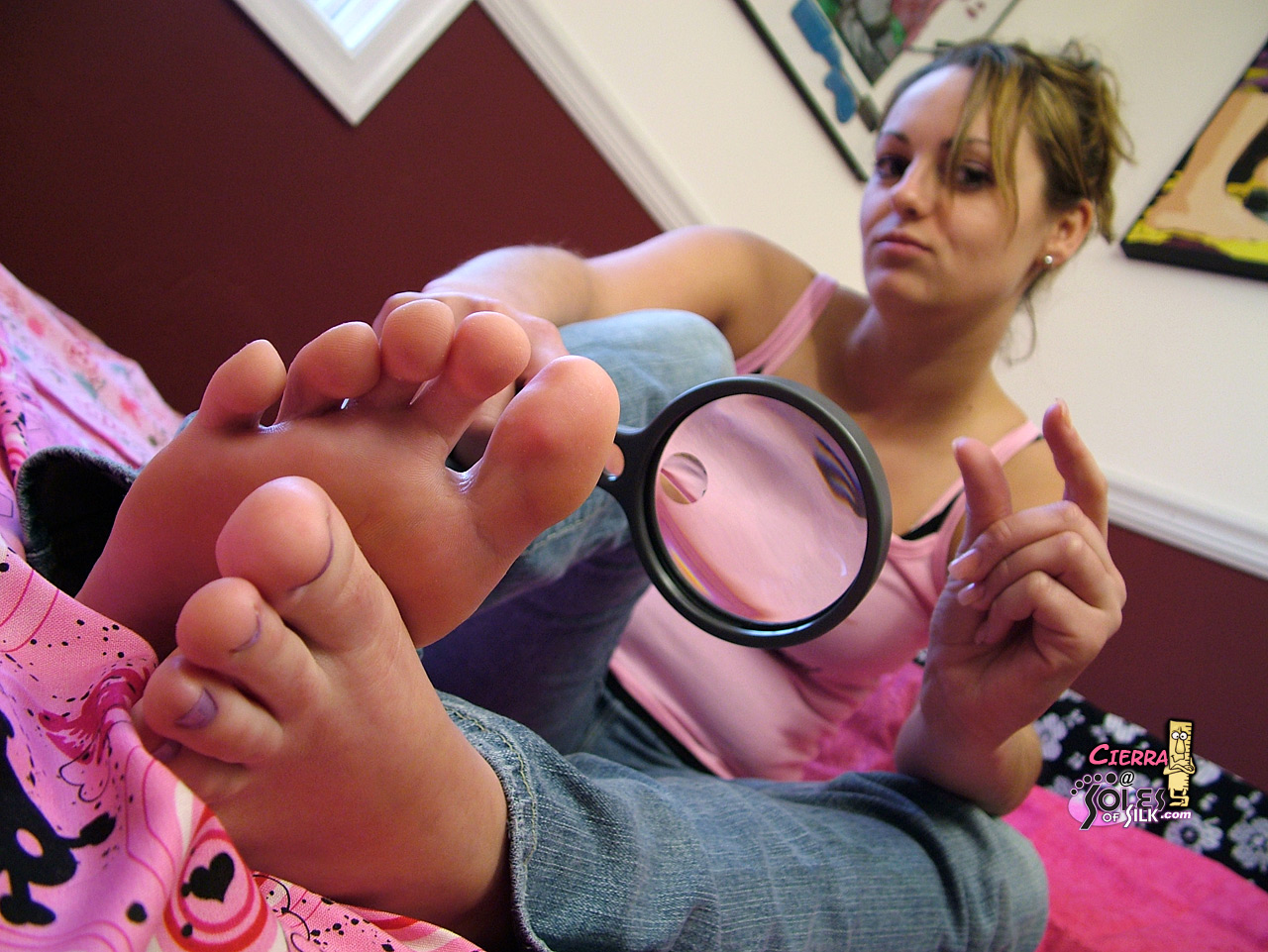 
This set is probably the naughtiest of the bunch when it comes to the Wu's Feet Links feature sets. Looking to do something different, I saw some other sites doing size tease sets. With most of them being pornographic, I decided to do one that just oozed attitude with some very girly aspects thrown in for contrast.

I turned my own bed into what looks to be a girl's bed with some crazy pink fabrics with skulls and hearts on them. I then had Cierra show off her bitch flip flops, pull out a magnifying glass, ruler, and notebook - all while wearing a size does matter shirt. I was amazed at how easily the normally happy go lucky Cierra was able pull off the brash, even slightly bitchy attitude. Maybe she even believes in some of those gestures she was flashing? 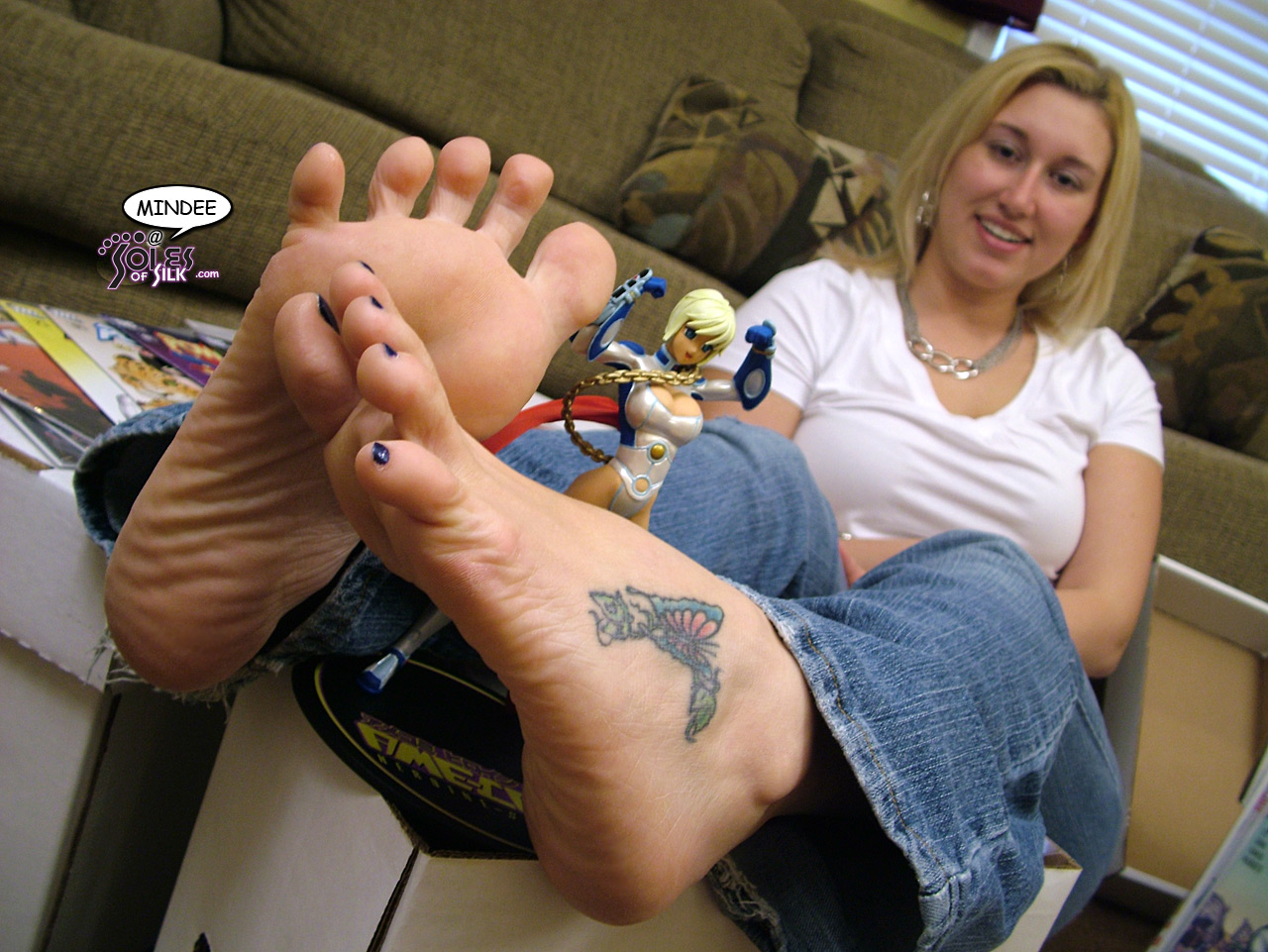 
Mindee had been on the site since 2004 - a site original. Over the years she posed for quite a few sets, but it was around the time of this set that she really began becoming one of the site's main models. When this set was published in March 2010, it made her a fan favorite of many.

I had always wanted to do a series of sets where the girls read comics, played with comic book hero themed toys, wore comic book apparel, etc. The nerd in me figured that many guys would love to see something they like, such as comics, side-by-side with their fetish. I was right!

I picked Power Girl as the theme for Mindee's set as Amanda Conner's Power Girl run is what got me back into comics. With Power Girl being a busty blonde, fun loving, yet strong character, I figured Mindee matched each one of those qualities perfectly. A bunch of fans even said the same thing once the set was published. 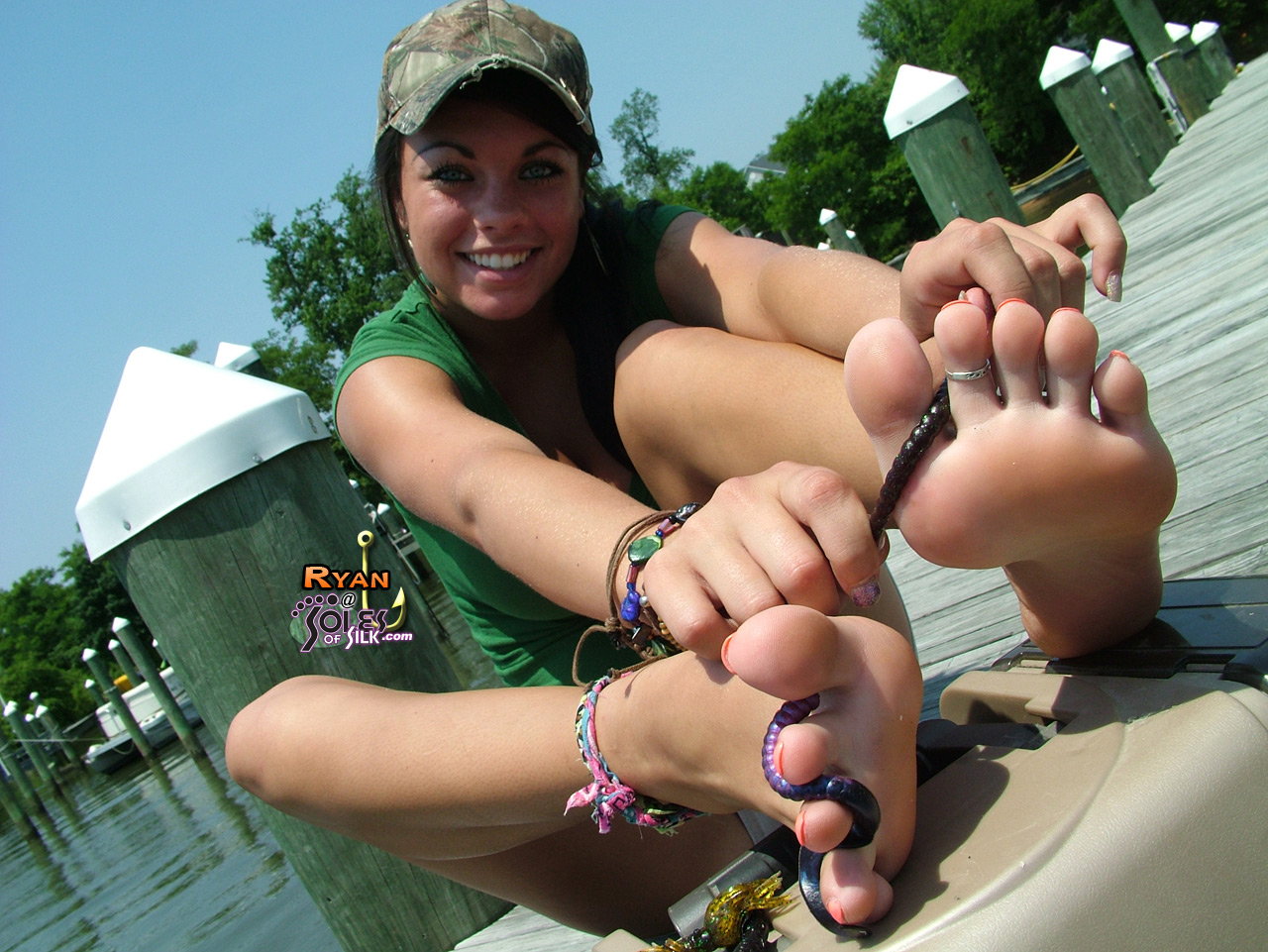 
As I said above with Kellie's and Kimmie's Football Fun feature, Wu sometimes let me do firsts for his sets when it came to the ones I submitted. Ryan's Sexiest Catch was perhaps the most secretive set to ever be published to his site. Why? Well, Ryan had never been featured anywhere online, not even on Soles of Silk - which was by design.

A few of my initial choices for feature models for the site fell through in 2012, but as time drew near to do the set, Ryan turned 18 and had been wanting to pose. I sent a couple snap shots to Wu and said that I was going to shoot her soon. I then asked him what he thought about the idea of debuting her through the feature set itself. As soon as he saw her snapshots he told me I had his permission to do just that. He thought she was damn sexy!

Ryan ended up shooting several sets as we weren't sure which one we wanted to use as the feature. We ultimately decided upon the fishing set, as I went back to the whole "guys wanting to see things they like with their fetish" that worked so well the year before with Mindee's set. I was right once again.

The following week I debuted Ryan on Soles of Silk in another set, but for one week the only way you saw Ryan and her 18 year old feet was on Wu's Feet Links in her feature set. 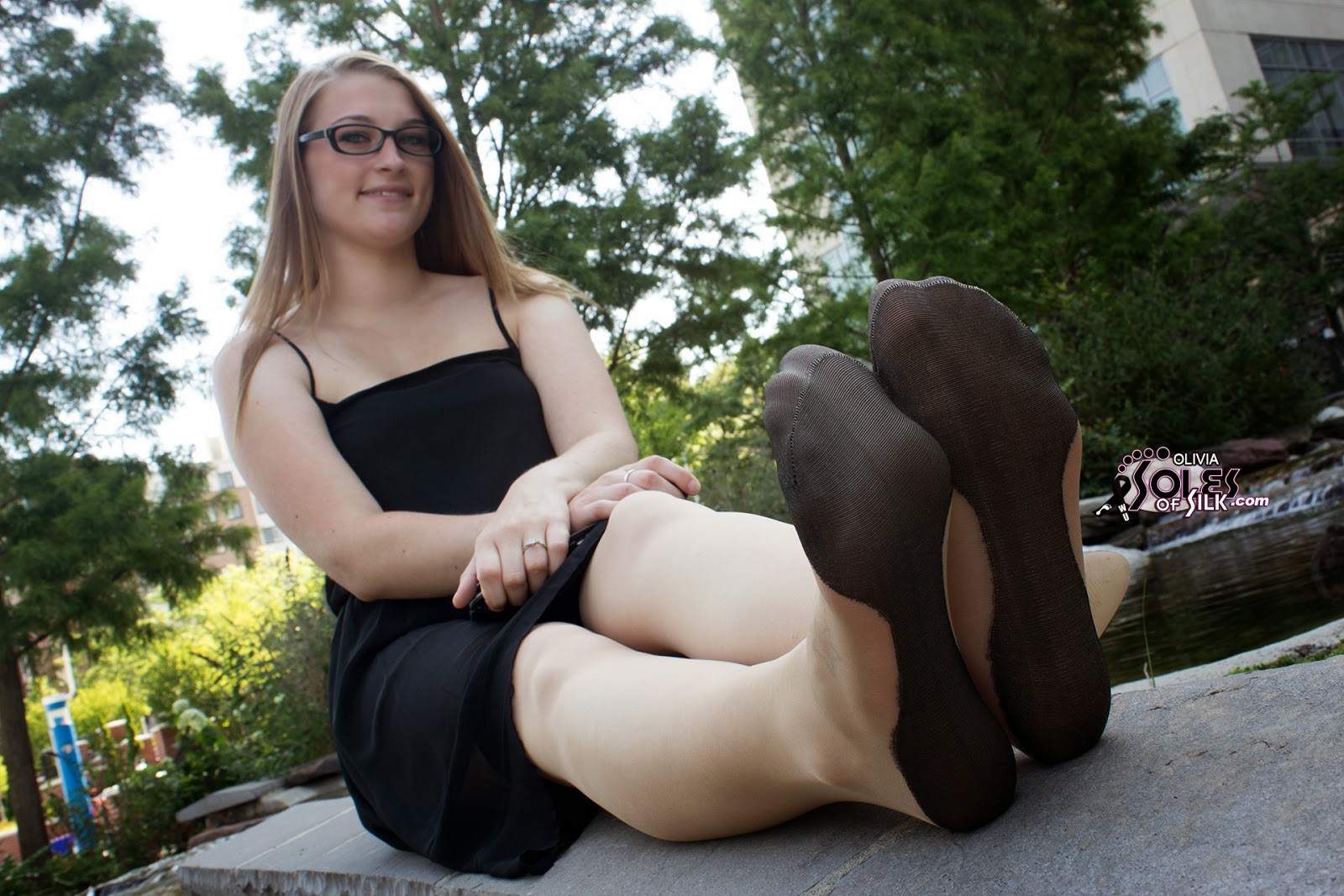 
This feature set with Olivia is important to me first and foremost because it served as the set that relaunched the Wu's Feet Links feature section after he had passed away. Olivia had already been selected by Wu late in 2013 to represent the site in a June feature in 2014, so when his site stopped being updated, I wasn't sure why and worried. When I learned why, I wasn't sure if Olivia's set would ever get to become a reality.

After talking with Phil of BHE, the hosting company for both Wu's Feet Links and Soles of Silk, he agreed to let me assist in relaunching parts of the site. I asked him for permission to be the one to go first with the features section as it meant a lot to me to carry on Wu's memory. He told me to go right ahead.

Now having the knowledge of Wu's passing, I elected to include a few subtle odes to him in this set with Olivia. First of all, you see a lot of black in the set. With Wu's site always having the black background, I thought that would be one way to represent his memory. Since black is also a color of mourning, it also worked in that regard. The title of the set, "Back to Business," just felt right as it was going to get Wu's Feet Links back into the swing of things. And finally since Wu was from Washington, D.C., Olivia and I shot the set in his hometown region.

Aside from all those aspects, this set was made possible, and quite honestly, amazing, because of Olivia. I tell her all the time I don't get to shoot her enough. She's a great girl and is always a ton of fun to spend the day with shooting. Seeing her before me in those Cuban Heel stockings, heels, and those glasses, in the unique setting we decided to use, I just knew this set was going to be one I'd treasure. I felt 100 percent comfortable having her do this set that was going to be special to me and the whole community as I've come to expect great sets from her. I know Wu would have loved it!

Thanks for taking this stroll back through time and looking once again at all these awesome feature sets from Wu's Feet Links. I really do miss the guy and am proud to help carry on his site as best as I can with whatever I can do. I just wish he was around to help select all the models that would represent the site in his feature sets over its next 10 years.
Posted by Soles of Silk at 8:26:00 PM