Before 2014 began I had a vision to debut 10 new models on Soles of Silk. I thought it would be a neat way to celebrate the site being online for 10 years. Sadly, a number of potential new models have failed to come through, but over the last two weeks I've been lucky enough to have two of my personal friends pose for their first time. Last week it was Bobbie posing her size 8.5 feet - which you will see featured on the site this very week in her Fourth of July set. And today I shot the beautiful and super-sweet, Kaycee.

I've known Kaycee for about a year and the term "super-sweet" doesn't even really do her justice. She's probably the nicest person I know - one of those people you can't ever see being mad at. In addition to that, she's also very quiet. For the longest time we would work together, exchange some small talk, but that would be about it. Recently, however, I've seen her opening up just a little bit more. When I made mention of Soles of Silk and my foot fetish photography, I honestly had no clue what to expect when it came to her response. Would she think it's weird? Would she not understand it? Maybe she'd think it is cool? She's an artistic person and I find artists are often more open-minded about such things. So maybe, just maybe she wouldn't find it goofy.

"LOL! Aww, these photos are cute! Very artsy! I think this is a really cool idea! Very cute pics!" was her reply when I sent her some photo of some of the girls on the site she knows.

With that response, I had to ask her to pose. "If you ever wanna do it..." I asked in a playful way.

I'd love for you to photograph my toesies," she replied.

And with that we agreed to find a date to make it happen. Needless to say, I was looking forward to it. Kaycee is very pretty and although she told me in the weeks leading up to today's shoot that she's not photogenic, I knew she'd be just fine.

Kaycee and I met around 10 a.m. and got on the road. She had to be back by 3 p.m., so I didn't plan on doing more than two sets. Plus it ended up being very hot/muggy, so two sets was perfect.

I decided on going to a large waterfront park I had never used before, although I had shot several times on the opposite side of the very same river - the Susquehenna. There is a lot of scenic locations out that way and I wanted something pretty for Kaycee. She even mentioned doing something on a pier or on the water, so it would be perfect.

As we drew closer to the park I ended up missing a turn. My GPS told me to turn on this small street last minute and I went right by. That turned out to be a blessing in disguise though. A location I had also been looking at the night before was a few hundred feet away, so we checked it out and loved it. It provided us with two unique locations right next to one another. Sometimes things just work out.

Kaycee's first location was on the water - a long scenic pier just under a railroad bridge. This bridge can also be seen in one of Abby's sets posted in 2011 (Sample 01 / Sample 02). Abby shot her set across the river, however, in an old historic town.

With this being Kaycee's first set I wanted to make this one as simple as possible. I told her to keep her sandals on and I'd have her pull them off throughout the set. Most models seem to like having props to interact with and shoes, especially strappy ones, give the girl something to do in the set.

Luck was on our side as we had the entire pier to ourselves. It was also lined with multiple benches overlooking the river in both directions. And the sun was even in a key location for the background I wanted. Add in the fact that there was a beautiful new models waiting to shoot her first pictures and I couldn't have asked for a better situation. Well, maybe if it was 10 degrees cooler? 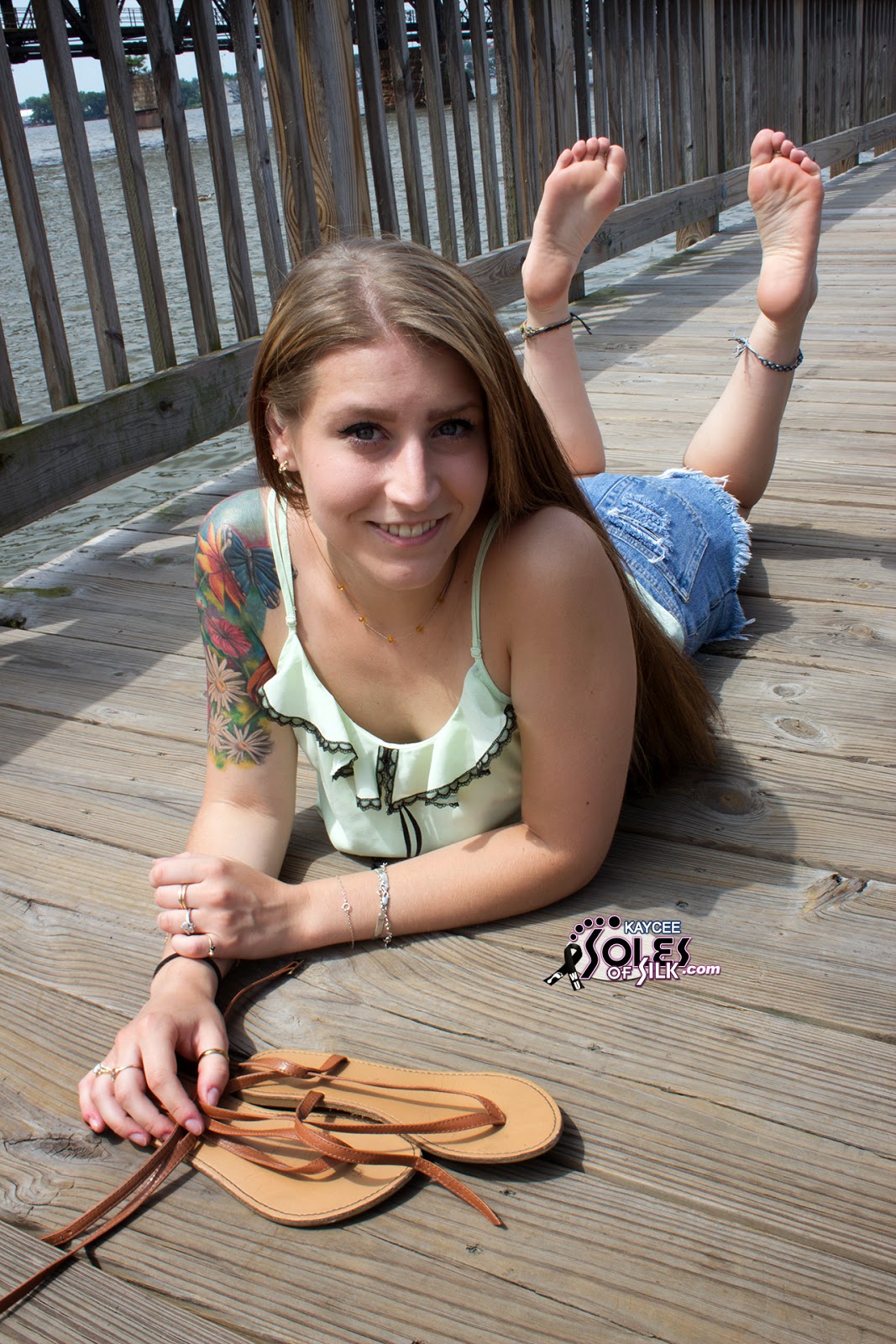 I had Kaycee start off with some standing shots before sitting down on one of the benches. Once seated, she began tugging the straps on her sandals to bare her soles for the first time. And they were cute!

Once both sandals were removed I had her start doing some toe spread and sole scrunch shots - both of which I explained to her in our messages back and forth about a month earlier. She claimed she could do both those poses, so I couldn't wait to see those little toe ring-clad toes spreading and curling in front of the camera.

"I saw Ryan did ones like these," Kaycee said. "I liked those."

I snapped a few of her and loved hers as well. "Aww, you're so cute," I said, showing her the camera's preview screen.

Kaycee smiled and said thanks.

With our photos done and both of us sweating our butts off, we did a video clip of her pulling off her sandals before heading back to the car.

Right by the parking lot was an old historic Tavern. As we passed it I told Kaycee I really liked the back porch and wanted to use for the second set. But as we sat in the car cooling off in the air conditioning, a professional photographer arrived and began using the same spot to take photos of several kids. We waited a bit, but after about half an hour, it didn't look like the photographer wasn't going anywhere anytime soon. We decided to check out the front porch on the tavern instead and ended up liking it better. But d

During our walk up to the porch and the entire time on the porch figuring out how to shoot the set, Kaycee was barefoot. I said, "Eww, you're feet are going to be all dirty now!"

Since the building itself was under renovation, there was quite a bit of dirt and debris around. It looked like a lot of it found its way to Kaycee's soft soles. Plus, with it being hot, it clung to her feet with ease.

When I saw just how dirty her feet were I explained that there are guys out there who really dig the dirty feet aspect of the fetish. Being a bit of a neat/clean freak, Kaycee said, "Okay?" and just shrugged her shoulders. 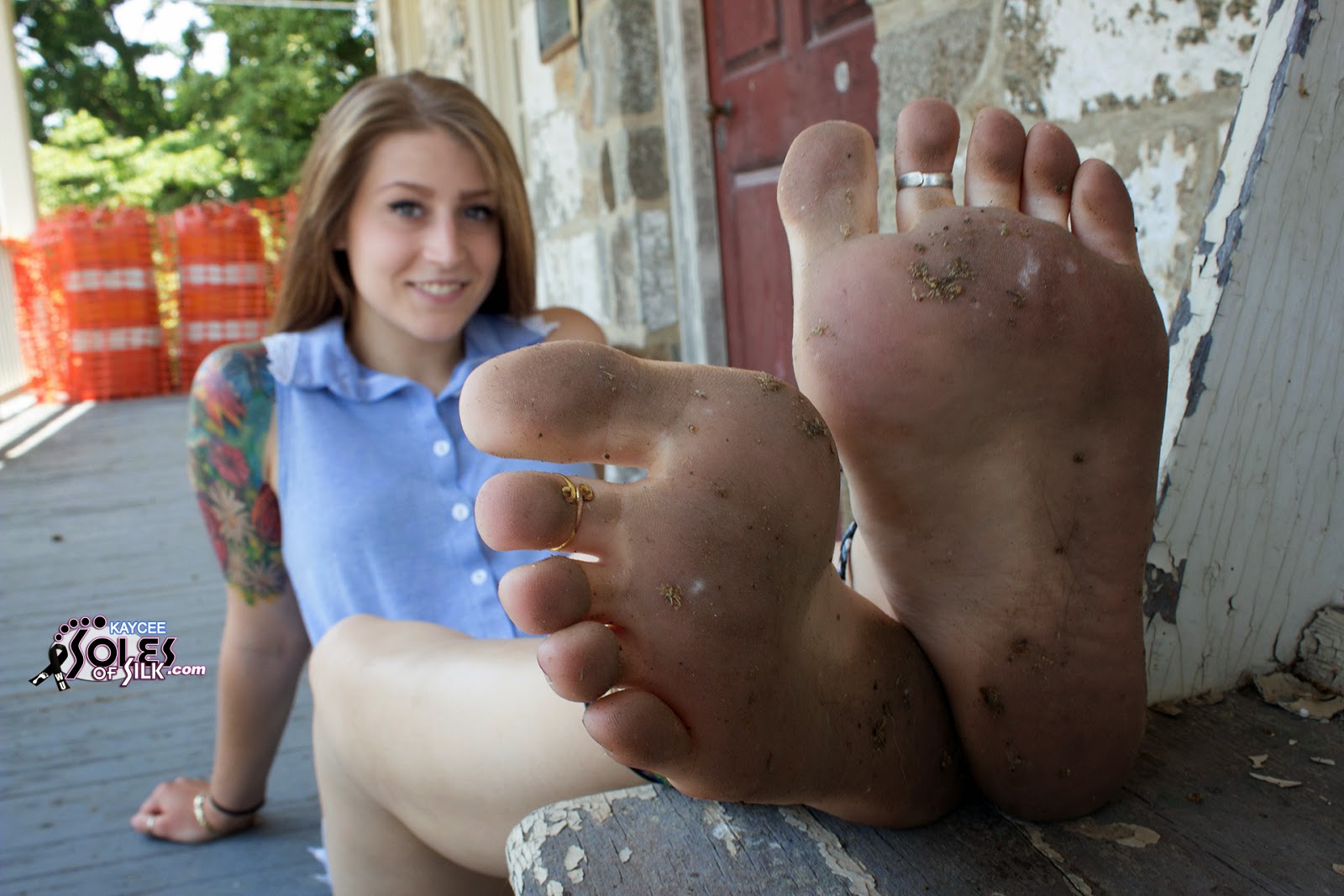 With that said, we got right into shooting the second set. Kaycee once again started standing up, this time in front of the door. At this point her feet were pretty much blackened on the bottom. I just said, "Wow, they're really dirty!"

"No, no... It's fine. Again, there are some foot guys out there who really like them that way," I assured her.

Having seen just how dirty her soles had become, I asked her to sit down on the long bench in front of the windows. Kaycee kicked her feet out at me and I began shooting shot after shot. I told her to do whatever came to mind with her feet - whether it was spread toes, curled toes, crossed ankles, feet stacked, etc. I find that each model does different things when I say this and it produces some unique poses.

After the bench I was at a loss for where to shoot next. Kaycee herself came up with some poses.

"How about I sit here and put my feet together?" she asked.

We finished up the set with her sitting on the porch itself before moving back over to the bench for another clip. I came up with the idea to just have her clean all the dirt off her feet in the clip since she'd have to do it anyhow. She said that's fine and that's what we did.

With her first two sets in the books we went back to the car and get ready to head home. We finished with some time to spare and Kaycee admitted that it was really fun posing for me. I told her she's more than welcome to do it again, and hopefully often. She thanked me for the compliments and we began our car ride home.

I really had a great day hanging out with and shooting photos with Kaycee. I am so glad she felt the same way. We're talking about doing a day trip at the end of summer when the weather cools off a little bit. She told me a few times she wishes she could get out and about more often. I'm tasking myself with finding this sweetheart of a friend a place to go with some interesting shoot locations, but also a place where we can go enjoy the day after the camera is put away. I can't wait!