Some of you might remember from the May 31, 2022 shoot blog, "Tuesday's Shoot - Roulette Raye," that my original plans that day was to shoot two sets with both Roulette and Leah. With the high temperatures and Leah not feeling well that day, she and I decided to postpone. Roulette and I still forged ahead and did the sneaker and lotion sets.

Jump ahead to the end of last week and Leah and I made plans to shoot her sets on Sunday. The forecast called for much more pleasant day, reaching the mid-70's, opposed to the mid-90's Roulette and I had to endure. Sadly, we still were left to dealt with some strong winds which ruined several waterfront locations downtown.

Although things didn't go to plan off the bat, Leah and I had a great time hanging out. We even managed to squeeze in a couple of touristy things before leaving the city. One of these days we'll return to those spots to see if we have more manageable conditions. 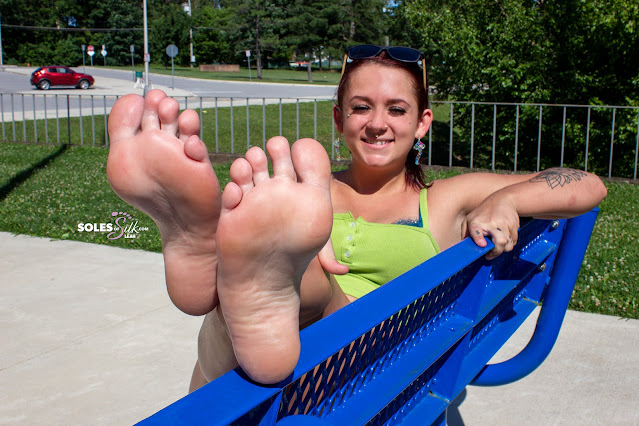 Something that turned to my advantage from not shooting at the first few locations followed by all the walking during our sight seeing adventures was Leah's feet getting nice and sweaty! Trapped in her sneakers and a pair of mismatching socks, I knew they'd be nice and damp once they were freed. Maybe this was my plan all along? It wasn't, but I know Leah wouldn't mind either way. She was promised a foot rub or two throughout the day and she planned on collecting on that promise. Even if I hadn't offered, she would have insisted.

We kept this set simple. With Leah up on a bench, she kicked off her sneakers one-by-one and then did the same with her socks. And before you yell at me, I know the socks and shoes are not in the sample photo above. This was one of the final shots once her feet were bare. The socks and shoes are down on the bench, trust me.

Speaking of her bare feet, boy were they ever damp! Sticking my fingers between her toes, those tight spaces were so moist. I ended up tickling the hell out of her in the process. Her feet were so sensitive from the walking. Still, she didn't pull away too much. She wanted her feet touched!

Oh, and once the set finished, Leah collected on that nice long foot rub. Do you know what she had the nerve to say, though? While rubbing her feet she said, "I wish I knew a guy with a foot fetish who would literally come over my house and just rub my feet regularly." I literally just stopped and looked around like, "Really?" 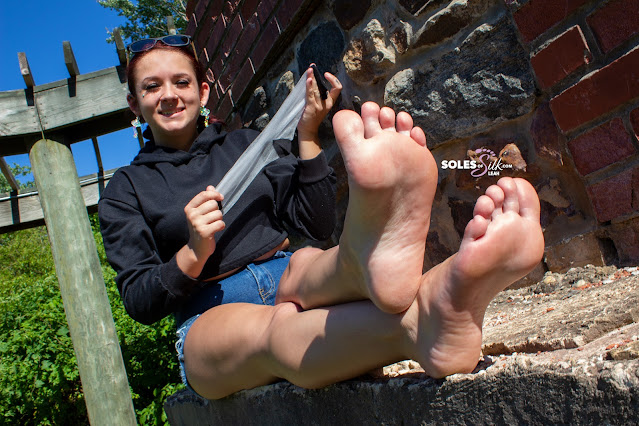 The second set of the day featured another pair of socks, these ones were much different, however. These were mostly clear. You can see Leah stretching one of them out in the sample above. Other than the black heel, toe, and band around the tops of the socks, they allowed Leah's soles and arches to remain visible throughout the entire set.

We shot this set at the same park where Roulette and I dealt with the drone a few weeks ago. There was no drone this time, thankfully. We did see a park staff member clearing fallen branches and debris from the grounds and she saw us too. We got a couple of looks our way, but we were left to our own devices. Once we finished up, we were done for the day.

Since I don't have a ton of model variation among my unpublished sets, one of these will be going up this week. It's looking like Leah and Roulette will both be regulars on the site. I am thankful to the both of them for helping me build back up a collection of sets once again. Expect to see more of these two for sure!