A little over two weeks ago I met Roulette Raye for the first time. Introduced to me by Leah, the two of them shot a few sets a couple of weeks ago - one solo each and then a duo. If you haven't seen those sets, check out the blog, "Thursday's Shoot - Leah & Roulette Raye (New Model)," from May 13, 2022. Both solo sets are currently on the site as well.

Since that shoot I have been in contact with both models to shoot again. Today was the day we planned to do it, but 96 degree weather did hinder some of those plans. We almost decided to postpone outright, but the girls wanted to give it a try and see what they could tolerate.

Long story short, Roulette ended up shooting two sets. Leah, who wasn't feeling amazing to begin with, asked if we could shoot later in the week when it supposed to be cooler. I, of course, said yes. Be on the lookout for that in the next few days. In this shoot recap, I showcase Roulette's sets from the day, both of which came out great, with one having a rather odd occurrence take place. More on that below. 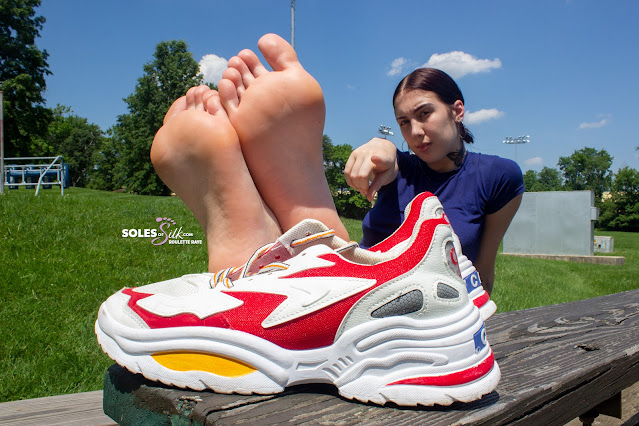 First up was a sneaker set. Roulette remembered me mentioning sneaker sets without socks a few weeks ago. Knowing that she was going to shoot today, she grabbed a pair of sneakers and was already wearing them when I showed up at the house. When I saw that, I asked if she was wearing socks. She said nope and laughed. I love her even more now!

Once we figured out where to shoot, we walked around for a few minutes trying to find the ideal place to shoot this set. Since it was so hot, we had a few places to choose from since no one was out. It was just too hot! And speaking of hot, poor Roulette had to endure some hot bleachers on her booty too.

Normally with a model who's been wearing sneakers for hours without socks, I'm in no hurry to finish the set. The more time spent with those sweaty soles and toes the better. In this case, however, since we were both sweating our asses off, I shot this one pretty quick. Still, I grabbed a lot of shots of Roulette showing off her size 11 soles and made sure those warm shoes were front and center. I know a lot of you enjoy when the shoes are kept close. 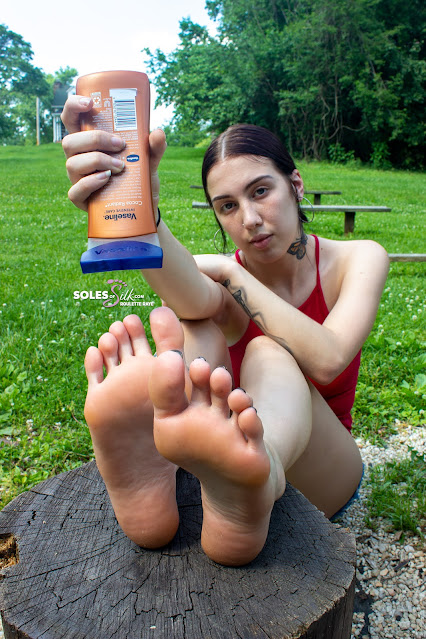 Our second set came about 30-45 minutes later. We dropped Leah off at the house and took a few minutes to cool off. We decided to use another park for this set and thankfully no one was around in this one either. Well, sorta!

Roulette really liked the area of the park with wooden stumps surrounding a fire pit, so we decided to use it. We made our way over and got things underway. We begin firing off our first photos and not too far into things, we heard a noise. It sounded like a weed trimmer, but it wasn't. It was a drone.

Roulette was the first to see the drone. It was buzzing around in the distance, not too high off the ground. We could tell the camera was pointed in our direction as it paused. After a few seconds it literally made its way to us and then hovered about 15-20 feet above our heads. It literally stayed there. We were both like, "What the fuck?"

We waved and I joked that I should throw some sticks up into the drone's blades. After about 30-40 seconds, the drone began to wander off in another direction. Before moving out of the area entirely, however, it stopped again and looked at us. It didn't stay there long, though. From there it went off into the trees and above the pond.

That was certainly a first. We decided to go ahead and finish up the set quickly in case it decided to return. I wondered if it was owned by the park and maybe a park employee was flying it around as a security measure. Roulette didn't think so and after giving it some thought, I think she's right. There was a neighborhood at the opposite end of the park, so some kid was probably flying it around. We weren't shooting any foot photos at the time, so we didn't give it much of a show.

As we were finishing up, we did hear the drone approach again. We shot the last of the photos and paused to see if it was on its way back. It sounded far off in the distance so we went ahead and finished up with a video clip. I didn't want it buzzing back over in the middle of that. So weird!

Although it was a hot one and we were being spied on, it was a fun day getting to shoot with Roulette once again. She seems to be enjoying these shoots and she's fun to be around. With her third and fourth sets today, she is now tied with Mindee for the lead with the most sets shot in 2022 thus far. We still have six months to go, but if this past month is any indication, it looks like Roulette might be a regular.