This week I had some big plans with Alice set to shoot on Wednesday and then Leah and her friend, Roulette Raye, on Thursday. Things fell through on Wednesday, so I told Leah that I'd be up to shoot a few more sets on Thursday if there was time. While set some high expectations to shoot five sets, but only ended up having time three. Those three were awesome though!

In all honesty, we probably could have done another set or two, but there was no way Leah was letting me come over and not spend some time rubbing her feet. It had been four years since our last shoot after all. She's always insisted that I rub her feet and I dare not say no. I mean, I don't want to say no anyhow, but you get what I mean. On top of that, I may or may not have gotten in a few little swipes and rubs on Roulette's size 11 feet too.

What I ultimately ended up shooting was two solo sets, one with each model, along with a team up. Yes, Leah was able to show off her tiny size 6's next to another pair of size 11's. The first time was when she debuted with Alice and here she did it with Roulette. On a side note, Roulette's feet are tied with three other models on the site for being the largest. Those models are Alice, Molly, and Bridgette. Fans of big feet will surely love her. I know I do! 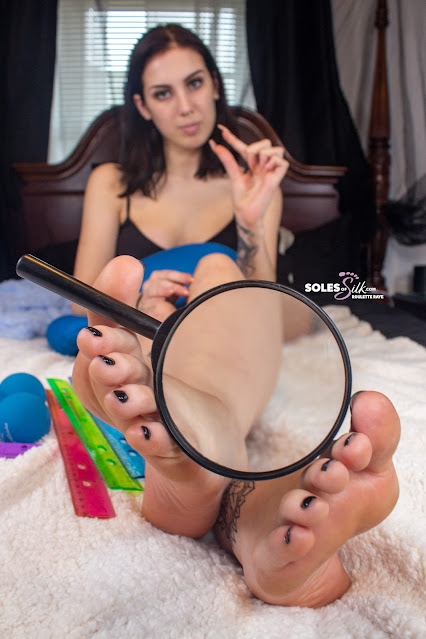 While I normally like to shoot my existing model first whenever they have a friend along shooting for the first time, Leah needed a few more minutes to get ready. Roulette jumped in and bared her big feet without hesitation. I gave her a quick rundown of what it is that I do and she did a great job.

Playing off her big feet I knew I wanted to stick some rulers into the set. Once we did that though, we decided to toss in the magnifying glasses and blue balls as well. Why not add some attitude and let Roulette be a little bitchy? It's kinda hot, to be honest. And as much as I enjoy a good tease from a woman with little feet (hi Leah!), a woman with big feet brings a fun dynamic to the teasing. Now just imagine getting them together. Oh wait. I did! No skipping to the end though. Leah's set was just as teasing and one we were both eager for her to shoot. 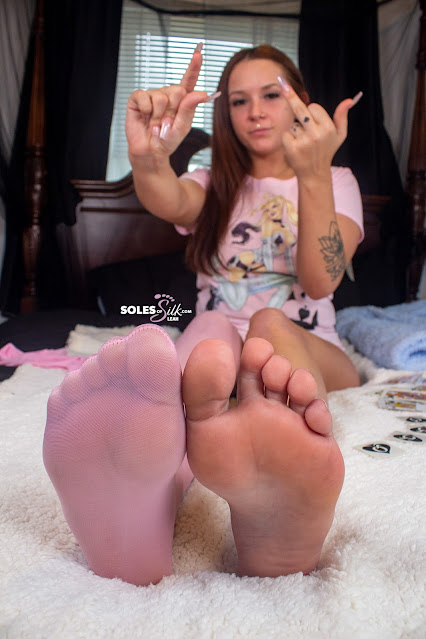 Seeing Roulette showcasing her bratty and bitchy side, Leah was excited to do the same. The two of us have discussed so many set ideas since we met where she could do this very thing. Of course we weren't going to waste any time and made sure to incorporate it into her return. And like Roulette, she looked so damn hot being mean.

Some of you might remember when I shot Princess Nikki a while back. She wore a purple version of the shirt seen in Leah's sample above. I bought two of the same shirts - one pink and one purple. I loved the art and queen of spade theme so much that I wanted to feature it a couple of times. When I showed Leah the shirt, she waited all of two seconds to say she wanted to wear it. I figured she would.

While Leah's set features a similar shirt and both models wore stockings that matched the shirt's color, this new set differs as it features numerous queen of spades playing cards. I knew they'd work well with the shirt. I also knew that I wanted Leah to be the one to wear it and do the theme. I figured she'd be all about it when I pitched the idea. I was 100 percent correct.

And here we are! I couldn't be happier, even though she was flashing tiny gestures and flipping off the camera. Or was that the camera man? So mean! I love it! And she fucking knows it! 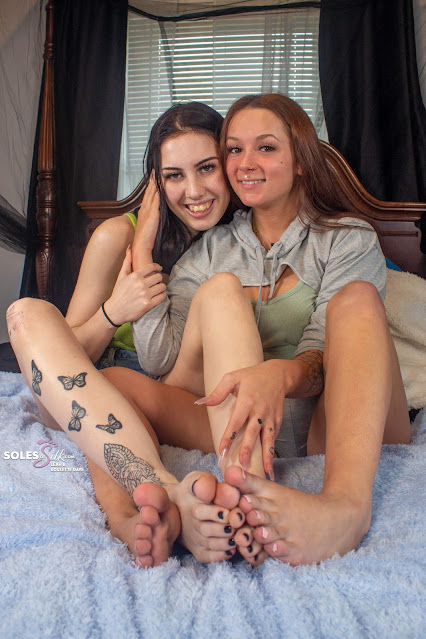 With us short on time, instead of calling it a day, or doing another solo set, I figured it would be best to pair Leah and Roulette together for one final set. The idea was to combine a size compare set with a tickling set. Both knew they were in for some torture too as they've both very ticklish. I found that out throughout the first two sets. Yes, I'm totally bragging about touching their feet again. Don't hate me! I'm used to being the one who is teased so it feels good to tease all of you and talk about how smooth and soft their feet are. How my fingers slid right across them, only to get stuck between their toes.

Speaking of getting stuck between toes, Leah's and Roulette's tongues and fingers also got stuck between each other's toes. I figured they'd be at each other's feet throughout the set. I wasn't going to stop them if did turn out to be the case.

In addition to the tickling and licking, this one also featured some of the same gestures shows in the solo sets above. It made perfect sense with big feet and little feet being side by side like that. So for once, the tiny gesture wasn't directed at me or you fans. It was directed at Leah here. Well, at least I think they weren't directing it as us. Knowing Leah, it just might have been. Yeah, it was probably was...

Once we wrapped up a very vocal tickling clip, featuring a very worried cat outside the door meowing non-stop, it was time to call it a day and get some food. I was very pleased with what we were able to shoot, but also treasured spending time with Leah after all these years. Meeting Roulette was a blast as well and I'm so happy she was up to shoot.

I have a funny feeling you'll be seeing more of these two again soon. We're already tossing around some fun ideas. Quite a few of them have to do with size teasing and being bratty. Am I surprised? Not at all. Shooting them with awesome models who love to tease, deny, and be bratty, make me one happy photo boy. Or is that foot boy, Leah? You're the boss, so it's whatever you say. Knowing you, it might even be bitch boy.