You know what is awesome? Catching up with a good friend you haven't seen in years. You wouldn't know that Charlee and I haven't seen one another since 2018 since she's had a recent update. That set, however, was one of many she and I shot during one of her previous visits back home.

When I learned that Charlee was coming back again here in 2021, I immediately asked her if she had any free time. Luckily for me (and you), she did. She's given me some time over the course of several days this week to get in some much needed content. She said she might not be back around for a while ago, so I'm going to make it count.

Today we managed three sets out in the heat. And what kind of sets work best with heat? Why sneakers and no socks, or if with socks, some knee high socks. That was today's overall theme. Don't worry though, over the next few days Charlee and I are going to be doing some other themes so she has some variation throughout these new sets. We have some rather fun ideas too that you're going to love. 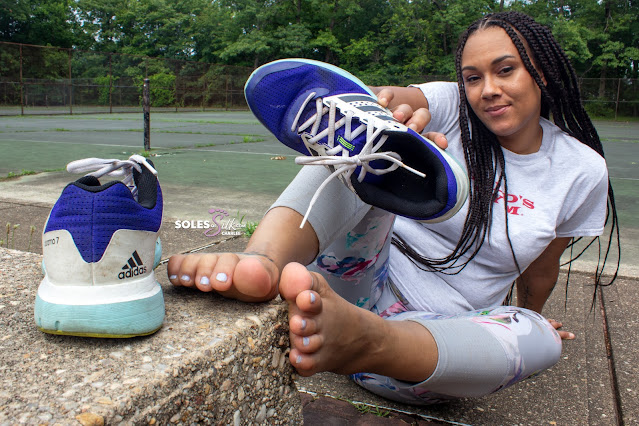 We decided to head down to a college not too far from where Charlee was staying for today's shoots. We found quite a few people around watching a baseball game, so we had our work cut out for us. We ended up walking around for a few and noticed no one was at the tennis courts. Only half the courts were strung up with nets, but it didn't matter. No one was around and I'm sure all of you are not paying attention to nets, unless they're fish nets or fence net stockings

Thankfully the ground wasn't too hot and we sat down to get things underway. The only thing that was being difficult, and it was throughout the entire day, was all the cicadas flying around. Charlee even freaked out when one flew right by her face during our first attempt to shoot the set's video clip. I saved it too. Maybe I should save up some clips like these and put them into a bloopers reel. That would be funny! 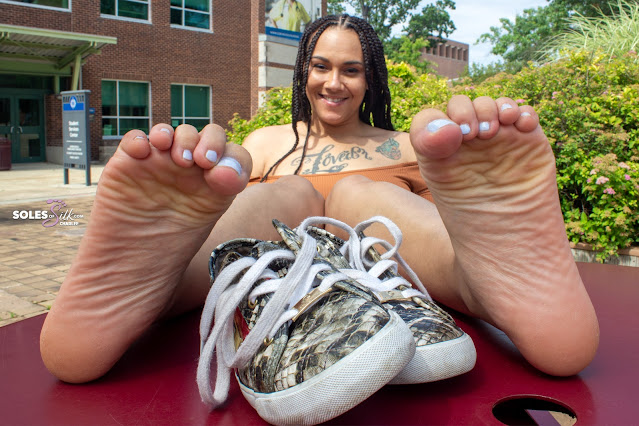 Since the rest of the rest of the areas near the courts were occupied, we decided to head up into the college area itself for the second set. No one was around, although a security officer did come outside right when we began. I was wondering if we were going to be chased away, but he was just locking doors. Or maybe he was watching from inside the tinted doors. If so, I hope he had a foot fetish.

I must say, I loved all three sets done on this day, but this set was my favorite of the bunch. There was so much feet in face poses and her shoes were always right there too. The landscaping in the background also helped make this set my favorite. What do you think? 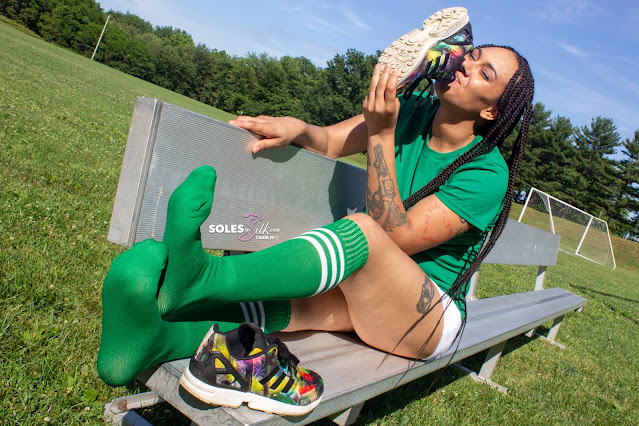 We honestly had no idea what to do for our third set. I didn't want to leave the area, unless we had to. Charlee had some plans with friends later in the evening and I wanted to be fair to her and her time. She and I have plenty of time to shoot in the days to come.

In the lead up to our shoots, I told Charlee that I was bringing along a ton of shorts, socks, and even t-shirts I have managed to acquire over the years. I used to buy stuff all the time, thinking, "I can use that in a set."

Truth be told, some of it has been used, but I've been sitting on a ton of it for a long time now. I want to put it to use and Charlee made sure we did just that. The shirt, the shorts, and the socks were all from those items and I'm glad they were finally included in a set. Well, the shirt has now been used twice. You can't really see it in this sample, but it's the same inchworm shirt Melani wore on the June 2, 2021 update (see sample).

Once we wrapped up our third set, we called it a day, but not before running out to get some snowballs. It was such a godsend because I was dying of thirst by that point. At least we have some indoor sets planned to be mixed in with any others we decide to do outside moving forward - and some rather fun stuff too. I can't wait. It was so nice to shoot one of my site's most photographed models once again after all this time. Thanks Charlee. It's always a great day with you. I sure do miss doing them on the regular.