One could say that 2022 was the year of returns for Soles of Silk. I worked with only 10 models throughout the course of the year to create new content. The majority of them hadn't had any camera time in over a year, with one coming close to six years. Even a few regulars hadn't shoot in quite some time. They just had so many sets in my backlog, waiting to be published, that one would never know. To the naked eye, they appeared as if they've never been gone.

To showcase my point, I've went ahead and compiled a list to show all the non-debuting models and how much time they spent away from my camera prior to their first sets of the year:

It goes without saying that I was so excited to see so many models who I hadn't worked with in years, return to the site. I didn't go crazy this year and shoot way more sets that I could ever publish. I've done that in years past, but circumstances in life had me moving with a slow and steady pace - usually shooting two sets each meet up.

With that said, only one model this year reached into double digits with her set count - doing so just barely with 10. Nibbling at her heels (pun intended), eight sets was enough to take second place. Third, however, is where things got interesting. This year features a three-way tie for third place. All three shot four sets and edged out two others who shot three. As I said, the pace was slow and steady. This definitely wasn't like 2017 when Mindee and Melani had 61 sets between the two of them. I wish it was, though.

Well, enough with the stats. You're here to see the models who claimed 2022's Star Model accolades. All these ladies deserve praise and lots of foot rubs for their amazing work throughout the year. This site would not exist without them and this is just one of the ways I like to show thanks for their efforts. Now, onto this year's Star Models: 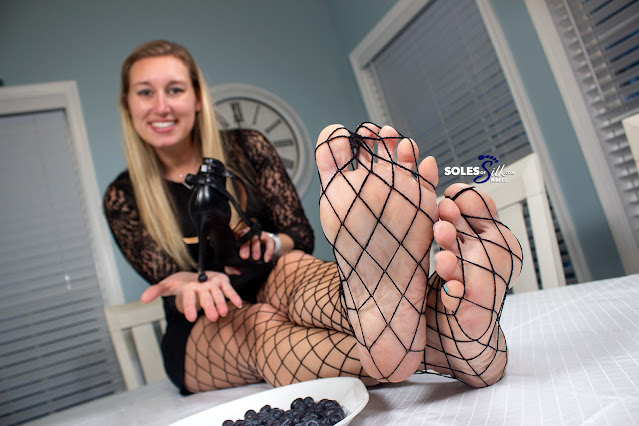 Things certainly got started off right in 2022 with Mindee. She was the first model to shoot new sets this year and I was hoping we'd get a chance to shoot a lot more. Sadly, that was not the case, but the four we did shoot were so fun. Spoiler: You'll be seeing a couple of them on the 2022 edition of My Favorite Sets which is coming soon.

Mindee is certainly one of the models you would have never expected to be on the list of models who spent so much time away from my camera. As I mentioned above, years ago we shot a ton of sets, 40 in 2017 alone. Combined with what we did in the years that followed, it goes without saying just how many of Mindee's sets were in my backlog. Her iconic size 8's remained front and center throughout most of this year.

I haven't seen Mindee as much as I would have liked to this year. She's always busy and has had lots of things going on in life. I've also had my fair share of "life" here in 2022.  I hope that changes in 2023. I sure wouldn't mind kicking off 2023 with new photos just like we did this year. Maybe even some new sets with her mom, Shelby, too? It's been a few years since I shot new content with her too. 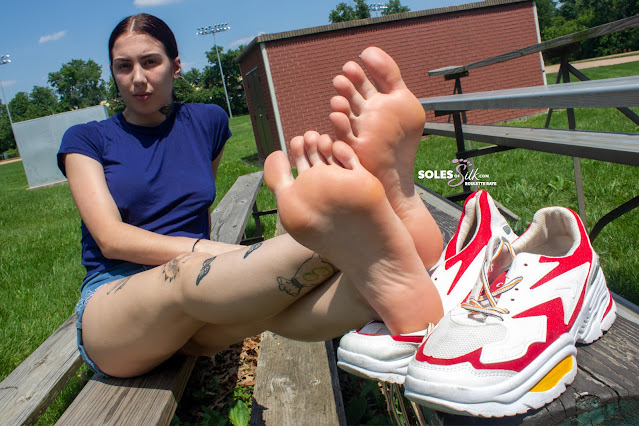 Earlier this year I was introduced to Roulette Raye by Leah. She agreed to shoot for me and I was excited to be adding another model to the site with size 11's. I know many of you were happy to see her debut and the sets that followed. The sweaty feet set above was my favorite of hers. It was shot on one of the hottest days of the summer too, so her feet were super warm and damp.

While I had hoped to see Roulette's set count rise over the summer and into the fall, that didn't turn out to be the case. Without getting into other people's business, Roulette is no longer living in this region. Last I spoke with her, she thanked me for letting her shoot and said she'd still keep shooting had she not moved across the country. I always leave the door open for models to return, should they desire, or in this case, are close enough to make it happen. 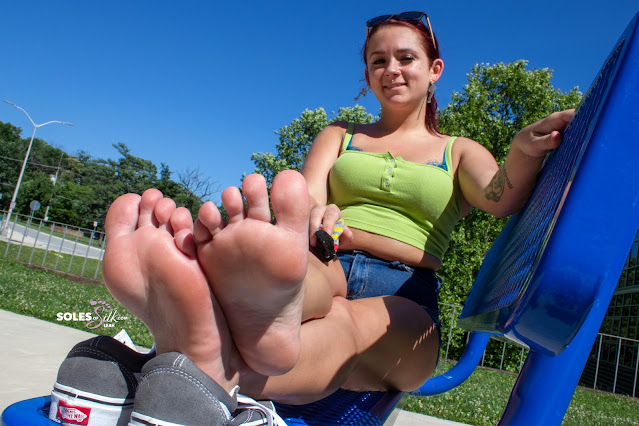 You don't know how happy I was to have this teasing little one back in front of my camera. After a hiatus just short of four years, Leah was long overdue. She's been a blast to shoot and spend time with ever since I first met her back in 2017. That's when she debuted alongside our mutual friend, Alice. I learned right away how much Leah adores attention to her feet, especially having them pampered before, during, and her shoots. Got in a bit of that this year, albeit, not enough in my book.

As mentioned above, Leah introduced me to Roulette. The two of them did a set together as well as several solo sets and were supposed to do a second that same day. We ran into some time restraints that day, so I missed out on a second duo. Leah and I also had some bad luck on the other days we planned to shoot due to a whole host of reasons including: excessive heat, excessive wind, and an excessively nosey security guard. Had plans had worked out on those days, Leah would have easily had this third spot to herself. She might have even challenged for the number two spot.

In recent times Leah and I had hoped to shoot something before the end of the year, but the holidays and work just couldn't make it happen. It's looking like something in 2023 will be our first chance to shoot again and I can't wait. We have some fun ideas, along with some more teasing/naughty themes always in play. She pulls them off so well. Probably because she enjoys putting us boys in our place. 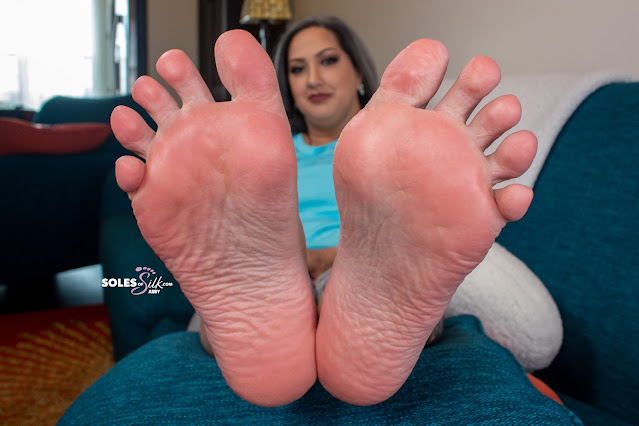 So many of you were excited to see Abby's wrinkled feet back on the site in 2023. She made an major impact this year and actually finished the year nine photos shy of being inducted into the 2K Club (2,000 photos). Don't worry, it'll happen soon. We're already trying to set something up for January.

Abby and I met up a few times throughout 2022, usually shooting two sets at a time. We did everything from simple to elaborate as far as locations and themes were concerned. Above all else though, our shoots gave us time to reconnect again as friends.

After we both left a job that we used to work together, we didn't see much of each other for some time. Then Covid-19 came along and and prolonged that even further. Earlier this year I said it's long overdue that we got together and I asked her if she'd like to shoot something after all this time. She didn't hesitate, which made me overly happy.

Had Abby and I not spent so much time bullshitting with one another, or watching WWE live events this year, she could have easily tied or take the number one spot all to herself. We always planned for more sets than we'd end up shooting. Oh well! After not seeing those soft soles for years, eight sets was a vast improvement. 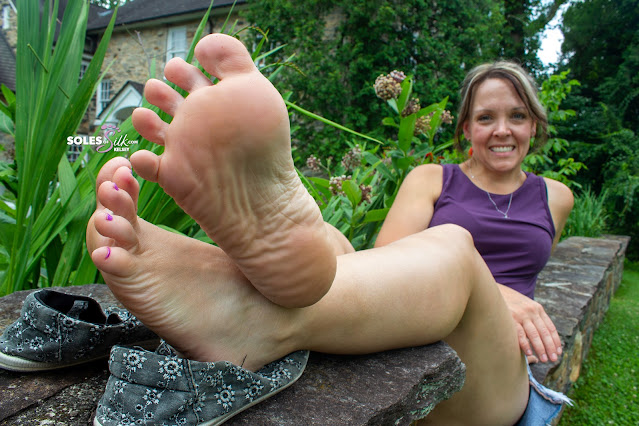 It had been so long since Kelsey last shot - almost six years. Although we didn't lose touch, we always talked about shooting and would run into roadblocks at every turn. Family, kids, work, the pandemic... it just kept her pretty feet out of sight from my camera lens for way too long. Well, in 2022 we said, "No more!"

Kelsey owned 2022, shooting 10 sets. Her count, like Abby's and Leah's, could have also been higher. The biggest hinderance Kelsey's sets was weather and/or sunlight. Naturally rain would turn up in the forecast every time we made plans. Not wanting to miss my chances, I'd often keep our plans and just start later in the day after rain passed, or go out earlier and try to squeeze in what we could. Even with that being the case, we still managed to shoot some amazing sets. We also had a great time getting out for a few hours and visiting some neat places in the process.

Now that Kelsey is back, I'm hoping she stays as one of my regulars moving forward. The love you have all showed her for her newest sets has been tremendous. It's not hard to understand why either. I've always adored her thick, pillowy soft soles. And even though I'm a sole guy, Kesley's plump piggies are just to freaking cute! They're so chubby and tender.

And with that, this was 2022's Star Models - five models who shot the most new content for the site throughout the year. I hope they, along with the rest of the models who shot this year find some time to do more in 2023. Maybe, just maybe, I can find a few other models who have been away for way too long to make a comeback too. Time will tell.

This portion of the Star Models blog began being documented in 2017. I wanted to see which models made the most appearances as Star Models throughout the years and who actually shot the most, well, the most. Wanting to know this information, I decided to share the results at the conclusion of these blogs as they progress. I will include this on each and every installment moving forward.

Most Overall 1st Place Appearances
Thanks for joining me on this stroll through Soles of Silk's history. I always aim to give my models as much credit as possible. Without them, Soles of Silk wouldn't be what it is. Please be sure to come back again this time next year when we look at 2023's Star Models.
Join Soles of Silk today to see this and over 15 years of foot fetish content!