After a six year hiatus, Kelsey has made the most of her comeback here in 2022. For the third time this year, Kelsey and I met up yesterday to shoot new content. While we faced several issues with lighting and my camera, we made the most of the day. We still came away with some sets I think everyone will love.

Originally, Kelsey and I wanted to meet on either Monday or Tuesday. Last week's forecast showed both days to be in the 70's and partly cloudy. This time of year, those conditions come in handy when outdoors. Well, Mother Nature had other ideas. It rained every day from Sunday to Wednesday. Kelsey and I had already decided to postpone to Thursday seeing the change in weather.

Needless to say, I was looking forward to this shoot. Our two previous shoots have resulted in some of my favorite sets of the year. With the themes and locations we had in mind, I expected another awesome shoot yesterday. While we did come away with three sets, we faced several hardships getting them done. These were things mostly out of our control.

All this said, yesterday was by no means a bust. Kelsey and I made the most of things and worked around some of the roadblocks. We didn't shoot all five of our planned sets, but that's okay. We managed three and that has Kelsey sitting at 10 on the year and now in lead for first place on the Star Model rankings for 2022. Spoiler: She wants to shoot some more again soon too. Expect her set count to rise before the end of the year.

Anyhow, onto the three sets we did manage to shoot yesterday... 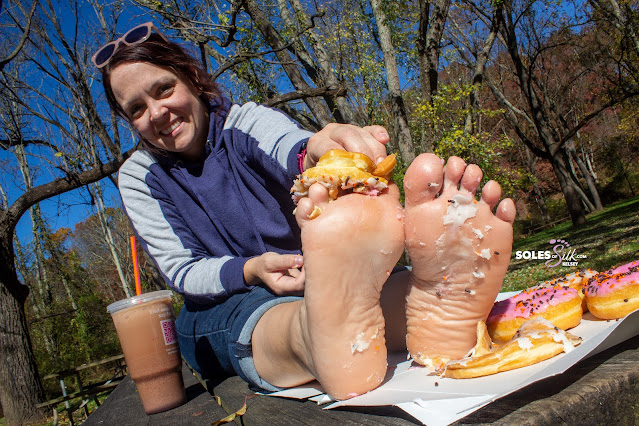 For a few weeks leading to yesterday's shoot, Kelsey and I had toyed with an idea for a glazed donuts smashing set. My plan was to use regular glazed donuts so her feet would just get super sticky and glazed themselves. That was the plan all the way until we walked into the donut shop and saw the vanilla (white) and strawberry (pink) glazed donuts. We thought the frosting on those two donuts would add some color to the set and still have a similar effect when smeared down her soles and in between her toes.

I had a few places picked out to shoot this set, but each one depended on how crowded the locations were. The first one, which was right around the corner from the donut shop, was promising. It was also close to some expensive apartments. We didn't want to risk a Karen calling security/police on us if they looked out their window. I don't think stepping in donuts in a public place is against any laws, but we decided not to deal with any drama.

The next location didn't work out for this set idea, but we did return here for the third one. Instead, we drove to the spot where Kelsey shot her mud set during our prior shoot (see blog: "Thursday's Shoot - Kelsey"). This spot has dozens of picnic tables spread across a large area, along with a pavilion. Even if a few people were there, we could separate far enough from them to do what we needed to do.

As you can see, what we needed to do was get Kelsey's feet all sticky. I'm telling you, she had a blast smashing those donuts too. Best part was, a group of people came and sat a pavilion when were getting underway. There was no stopping us at that point. While they weren't right on top of us, there is no way they couldn't see Kelsey was barefoot and stepping in something colorful. Obviously, they also saw me pointing a camera at the action too. There's no way they missed us doing our thing. Oh well. Should have offered them some smashed donuts. They were yummy. 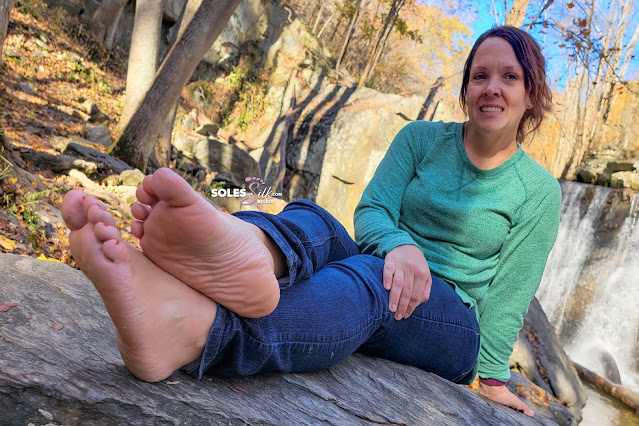 Our second set was one we were looking forward to doing so much. It was going to take place in front of a waterfall. After walking some trails to get to the falls, we were faced with our first of several dilemmas - getting across the water. With all the recent rain, the rocks normally used to traverse the shallow river were right at, or just below, the water level. We said, "screw it," and tip toed across. We made it, but some water deep seep into our shoes in the process.

Once we were across, that's when the real headache began. With no clouds in the skies, shadows were dark and highlights were bright. My camera, which is on the older side, was not having it when I tried a few test shots. Kelsey's skin tones were bleached out in some, then totally muted with color richness in others. I was crushed.

With all the advancements in internal sensors in newer cameras, I made the comment that I'm should invest in a new camera. Well, my camera was listening and must have gotten mad at me for my statement. More on this in the third set's description.

Instead of giving up on the location, after the long walk down and time spent crossing the river,  I decided to give my phone's camera a try. It's a Samsung Galaxy S20 Ultra and has always given me rich colors and amazing low light results. While there are some things I prefer with my DSLR, it was apparent that it wasn't going to cut it here. My phone worked fine and we moved into the set.

While we still faced issues finding enough places for Kelsey to shoot directly in front of the falls, we remedied that by shooting some along the pathways and in the surrounding area as well. So just know the falls aren't in every single shot. Her feet are though, which I know is all you care about.

Oh, and Kelsey would be mad at me for not sharing this, so let me embarrass myself before moving on. As we were starting this set, Kelsey was taking off her shoes and socks. She was on a larger rock and I was standing on the ground, which was soaked, muddy, and covered with leaves and broken sticks. So yeah, not the most stable ground.

Well, when Kelsey pulled off one of her socks, it landed right on the edge of the rock and began to slip down to that nasty ground below. It happened in slow motion to me. I saw it began to slide off the rock and I went to grab it. Of course, I began to slip myself in the process. Kelsey grabbed one of my arms and I managed not to wipe out.

"But that sock was on your foot," I said laughing just as hard.

I was such a hero! 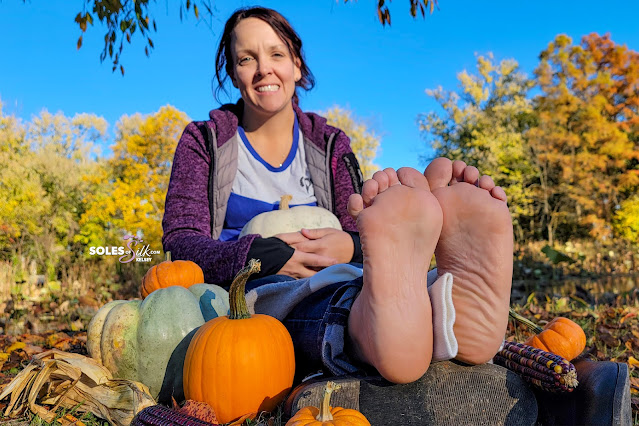 Before the day began Kelsey and I planned out five different sets. We managed to do two of them, but knew we only had time for one more after the setbacks at the waterfall. Since one of our sets involved a bunch of pumpkins I had bought the night before, we decided to go ahead and do that one.

The location for this set took us back to the park we decided against using for the donuts set. It featured a large pond, with a wooden bridge out to a small island in the center. Surround the pond were countless trees adorned with red, orange, and yellow leaves. It was perfect for the autumn theme we were wanting to do. We just had to see if there was enough light since we'd be under a small tree out on the island.

Kelsey wore a pair of boots with boot socks for this set. I've always been a fan of this combination of footwear, but haven't shot it nearly as much I would like. I am glad Kelsey liked thought it would fit with our autumn theme perfectly. Well, fall theme for sake of the titles I've used for these sets. Did you notice how fall was in all of them somehow? I digress.

Now this is where my camera come back into play. Although we set up in a spot where Kelsey was covered in some light shadows, my DSLR was wasn't fighting me like it did at the waterfall. Where it did want to fight me, however, was around the 50 photo mark in a totally unrelated manner.

I have my camera set to beep when I focus. Well, the beeps stopped working. I had to keep turning the audible beep off and on for it to work again. This happened several times, usually after a few photos.

Then, about 10 photos later, the beep stopped and it wouldn't take a photo. Press the button and nothing. I changed batteries and even let it sit for a few minutes. Still nothing. Everything else worked, but it wouldn't focus or take a photo.

Wanting to get a few more barefoot shots, I pulled my phone back out. These showcased a bump in color vibrancy, so they might look a little different inside the gallery once it's published. I just wanted to make sure I had enough barefoot shots of Kelsey in the set since it takes some time to get off knee high boots and boot socks.

Once we finished up, we were headed back to Kelsey's for the evening. Of course my camera worked just fine when I turned it on in the car while waiting at a stop light. It's worked ever since too. I have no idea why it went into a funk. I can only chalk it up to being mad at me for suggesting I upgrade it to a newer model.

So while we faced a few hardships yesterday, Kelsey and I made the most of what was thrown at us. Every shoot this year with Kelsey has been an amazing time. I'm so glad she's back and can't wait until we are back at it again with all-new sets. You'll love the socks I found for her while shopping the other day. They have a cute slogan along the soles that she fully supports and I think her fans will only wish they could do. Guess you'll have to wait to find out just what I'm talking about in her next shoot blog, huh?