It sure looks like 2022 will be the year of the return. Almost every model I've worked with this year was returning after at least a three year hiatus. Well, it's time to add another model to this growing list with Carmella.

Carmella made her debut back in 2018. She did just two sets - one solo and then another with Ava. Her solo set marked her debut in June 2018. People loved her tiny size 5 feet and it was easy to see why. It took me two years, however, to publish her duo with Ava. That set came in August 2020, during the pandemic. I had so many unpublished sets back in 2019 and then Covid came along and slowed down how often I was shooting. Like many others, Carmella and I didn't get to work together again until now.

Our original plans were to shoot last week, but some things came up and we push things back until this week. Of course Monday was Labor Day and Tuesday and Wednesday called for rain. I kept my fingers crossed that things would clear up by the end of the week. It did and we made plans to shoot a trio of sets on Friday. Here is a sample of those three sets: 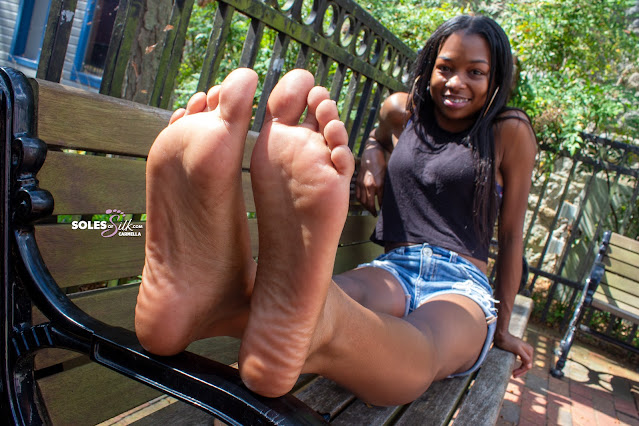 I asked Carmella to meet me in a historic town. I thought the old buildings, parks, and atmosphere would make for unique settings. Our first set was done at a small park, right of the town's main street. We decided to use one of the benches right off the street itself, so yes, we were in plain view of people. Pedestrians walked by the entire time and cars stopped for extended periods of time for the nearby traffic light. We didn't let this stop us though.

I told Carmella to come up with a phrase or word to use if she wanted to stop shooting because people were too close. Think of it as a safe word, if you will. I've done this with other models when shooting in public. If someone is coming up from behind me and is too close for their comfort, then the model says her desired word/phrase. I do the same if I see someone coming up from behind them. It just sounds better than saying, "Someone's coming," and looking like we're up to no good. Carmella picked "Halloween time," as her phrase. I guess she's in the mood for the upcoming scary season.

When we began this set, the was evenly shaded. Part way through the set, however, sun's movement overhead and left us with some patches of shadow and sun. At that point, I wasn't going to move and we liked how some of those highlights and shadows looked. 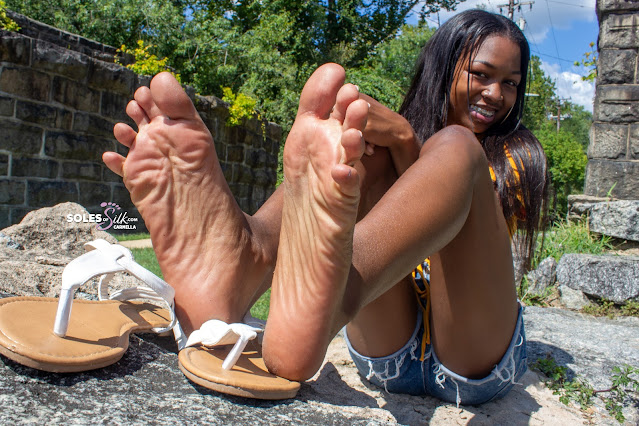 We had a bit of trouble finding our second location. I wanted to stay in the same town, but our potential spots weren't working out. This was mostly due to the direction of sunlight, but one spot was right next to an outdoor seating area for a restaurant. I am respectful and wasn't about to shoot a set 10 feet away from people trying to eat.

After walking around town and stopping at a few shops in the process, we ended up finding our second location. Oddly, it was right next to where we parked. It was the ruins of an old train bridge abutment right next to the nearby river. The lighting was perfect too. Carmella liked it, so she did a quick change and we got underway. Although we were right next to a road once again, the traffic was much less than our previous spot. There was also no traffic lights nearby to stop traffic beside us. I'm sure a few drivers saw us on the way by though. 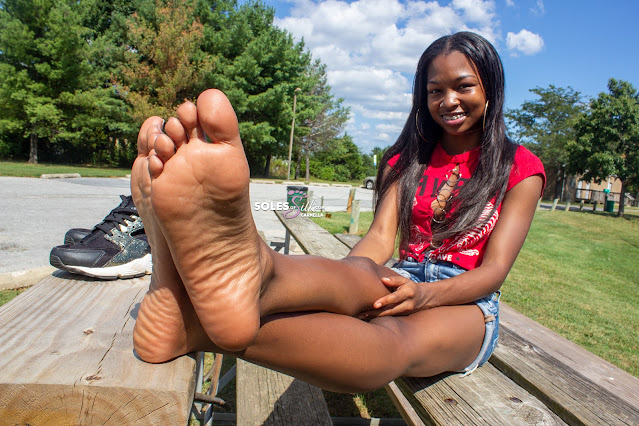 I asked Carmella to bring a pair of sneakers along Friday. You all know where this is going, I'm sure - a set with sneakers and no socks. Bingo! My fav!

We ended up leaving the town for this one, electing to go to a nearby recreation spot with several ball fields, playgrounds, and plenty of bleachers. Since school is back in session and it was still early afternoon, we had the place to ourselves for the most part. This, in turn, went by pretty quick.

Although it wasn't super hot, it was warm enough for Carmella's feet to be a little moist coming out of her shoes. Luckily for me, she wore them for a short while before we began the set. Plus, you all know me. I like to delay the start of these shoots just for that reason. So yeah, I might have small talked for a few before getting under way to help out with that.

With this coming week's set already teased, I will be adding one of Carmella's sets to the site soon thereafter. It's going to be great having her back. Her fans will be excited to see her back and for those of you who might be new to her with this blog, enjoy those tiny size 5's.