It's been six years in the making, but Kelsey has finally returned! You have no idea how excited I am to finally make this announcement. Well, on the blog anyhow. I did spoil it on Twitter (@SolesofSilk) last night and showed off samples from each set. For those of you who didn't see the Tweet, those samples differ from the ones included here. Be sure to go check them out for even more of Kelsey's adorable feet.

Now for a bit of backstory. Kelsey debuted on Soles of Silk in February 2006, shooting her first set the day after turning 18. She wanted to shoot on her birthday, but her family made plans to take her out. We decided to do it the following day and have her smash a birthday cake. From that first shoot onward, I treasured every chance I got to spend time in front of her pillowy soft soles and plump toes. I always loved that about her size 6.5 feet.

Although Kelsey's last shoot, until yesterday, came in 2016, a huge backlog of unpublished photos meant that I slowly added her last remaining sets to the site from 2017-19. With her last update coming in July 2019, Kelsey has been sitting at 28 galleries and 1,889 photos ever since. Being 111 photos shy of 2,000 has always bummed me out. Kelsey is someone who was a major part of this site over the years and I wanted to see her in the 2K Club (2,000) alongside other longtime models who have earned the distinction. Those models include: Cierra, Mindee, Charlee, Alice, and Kaycee. With yesterday's sets, that will now become a reality.

Without dragging this on and on, life, work, and eventually the world always pushed us back any saw any plans we had to shoot again come and go. Kelsey never stepped away from the site. We just didn't get together like we used to due to 100 different reasons. I'm hoping that changes and we can make up for some lost time. Yesterday was such a great day out with a friend - one I don't get to see as often these day. Let's hope these four amazing sets are just the start of Kelsey making her way toward the 3K Club and beyond. Better late than never! 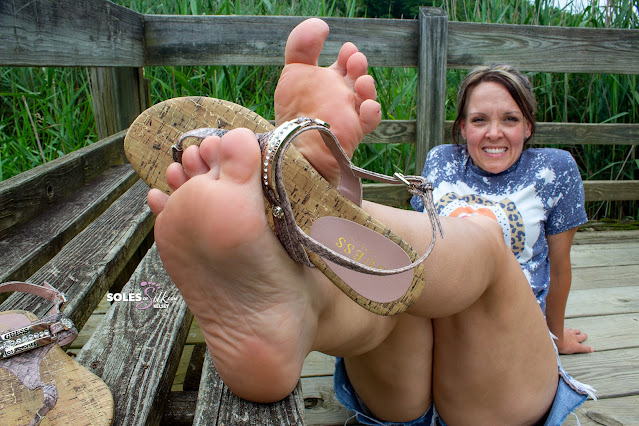 We began shooting around noon yesterday. The forecast was calling for rain all week, with storm scattered throughout. It figured! After all these years I was so worried we'd get rained out. Alas, we didn't.

Instead of looking for some far away locations to shoot, I decided to see what we could find in the immediate area. We found a waterfront park that was pretty empty. Perhaps the threat of rain kept everyone away? This was such a blessing because it allowed us to jump right into another set with very little downtime, especially with the threat of rain looming.

Kelsey's first set was done on a wooden walkway over some marshland. It was part of a nature trail that we only saw two people on as we made our way to the benches down at the far end. By time we got underway, those people were out of sight and we were left to do our thing.

I loved the sandals Kelsey was wearing when I arrived at her house, so I asked her to go with them for this first set. I just felt like they fit the setting better than some of the other footwear we could have picked. Thankfully, we found spots for the others that worked out nicely afterward. 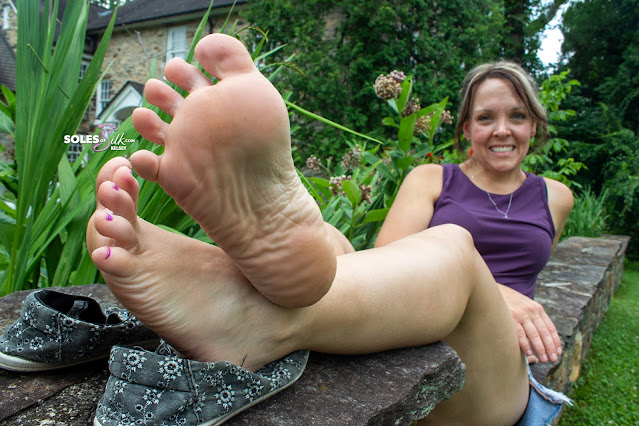 After heading off the trail and back into the park, I saw an ideal spot to shoot our second set. One of the historic buildings on the property featured a flowerbed with a nice, wide wall surrounding the plants. I thought having Kelsey shoot up on the wall with the plants in the background would look nice. Add in her flower patterned flats, could it be any more perfect?

While the first set was muggy with little to no breeze, this area was slightly cooler, but not by much. I was still sweating as I shoot these photos as was Kelsey. You will also be happy to know that Kelsey's feet got nice in sweaty while wearing her flats to start out this set. When I went to brush some debris off her soft soles, I could feel how moist they were. I laughed and said, "Your feet are sweaty."

Kelsey gave me a dumb look and replied, "What do you expect? It's like 90 degrees and humid out here."

"Wasn't complaining," I said with a smirk.

I really wasn't. They were so warm and damp. Let me stop before she gives me another one of those looks. I do think I'll be asking her to wear flats again though. 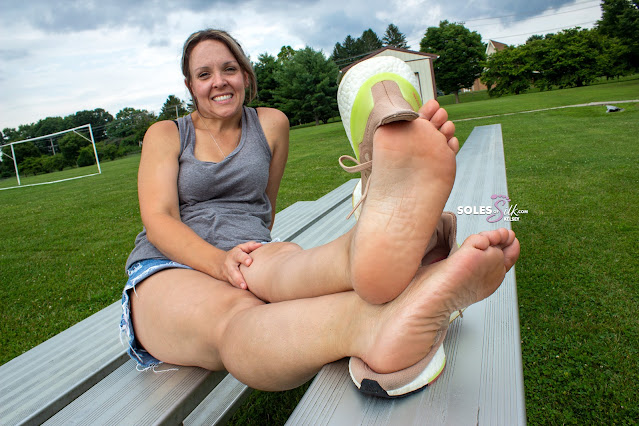 While Kelsey and I could have found a few other areas in the park to use for backdrops, I asked Kelsey to bring along sneakers for one of my favorite types of sets - sneakers with no socks. Since it was so humid and with Kelsey's feet got sweaty so quickly in flats, I wanted to make sure I got this set in before the rain. I also know that so many of you love these kinds of sets too. Even if didn't though, I'd still be shooting them.

We found a school down the road from the park with some bleachers. They were out in a wide open field, also with no one around. And for the first time of the day, we could feel a breeze. We could also see the clouds darkening off in the distance, so we didn't want to waste any time.

And while speaking about of off in the distance things, as soon as Kelsey popped her moist heels out of her shoes, a sheriff drove into the school lot and parked at the far end. Was he watching us? We didn't know. I said screw it, let's just keep shooting. It's not like school was in session. I'd never do that. It's the summer and no one was there.

After about a dozen photos or so, the sheriff left and we were back to our own devices. Kelsey's sweaty feet once again emerged from her footwear, but I didn't joke about how sweaty they were this time. With the breeze, however, I'm sure they cooled off a lot quicker than at the park.

While shooting this set, we spotted a playground off just around the side of the school. Like the fields, no one was around. The skies were getting a little darker, but we said we'd give it a try if it wasn't raining when we wrapped up with the sneakers. It wasn't, so onto our fourth set we went. 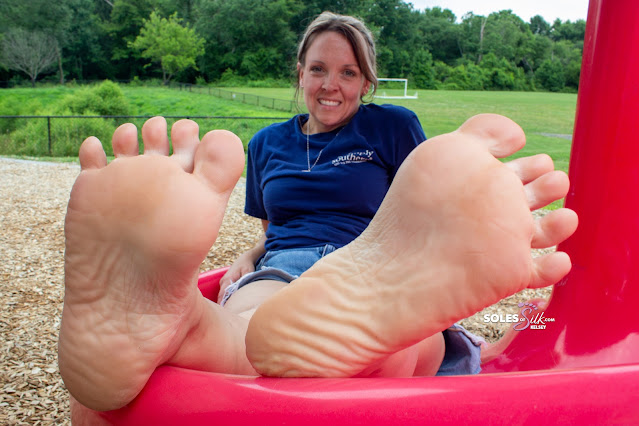 For not shooting in six years, Kelsey and I were so efficient with getting these photos done. She jumped up onto the playground equipment and we got underway within minutes. She flashed her soles and purple toes from the slide, wrapped around some poles, and even playing with one of the interactive game.

Oddly enough, the interactive game had sliders with different graphics like the sun, rain, and various other things. I am being 100 percent honest here when I say that when Kelsey took her foot and moved one of the sliders over to reveal a rain cloud underneath, raindrops began to fall almost immediately. Thankfully, we were just about done. I shot the final photos and did our last video clip before calling it a day.

Naturally, after the 15 minute drive home, the sun came back out, but so did the humidity. I would have loved to have shot another set or two, but knew four was a nice way to mark Kelsey's return. I missed seeing Kelsey barefoot and shooting for the site. I know many of you missed her as well. I'm sure all her fans are going to be so excited to see these samples and see her back on the site again. I know I am and I consider myself one of her many fans.

Both Kelsey and I had a blast yesterday and are already talking about getting together again for some new sets. No timetable on when that will be, but it better not be six years, six months, or even six weeks for that matter. Hell, seeing her tender soles in those photos makes six days feel like an eternity.