Today's shoot was big for several reasons. First, it marked the return of Alice to the site, one of only five models who have earned their way into the 2K Club (2,000 photos). Obviously, it's also big because, well, Alice's size 11's are tied with Molly's and Bridgette's for being the biggest on the site. There is, however, something even more important - something that I haven't shared with all of you.

Since Soles of Silk's debut, I have always had a backlog of unpublished sets waiting to be posted. A few years ago, I had over 100 sitting there waiting to be inserted into the update calendar. That is why prior to Mindee's most recent updates, all shot earlier this year, I was still publishing sets of hers from 2017 and 2018. I just had so many, especially of her.

Fast forward to 2020, during the onset of Covid, and I decided to focus on publishing those sets. Shooting slowed down and it made sense to use them while everyone waited to see how things played out. Once 2021 rolled around, I began shooting a little more, but was still using up some of that backlog.

Here in 2022 that backlog has dwindled lower than I would like. I did get in four sets with Mindee back in January, but that was the last time I shot before today. With the number of sets in my backlog low, I reached out to several models about shooting here soon and quite a few seem eager to make that happen. A few, Alice included, have friends wanting to give it a try. I was hoping her friend would be open today, but with it being Mother's Day and a gloomy day, Alice and I just went and did our own thing. Hopefully her friend can make it soon. 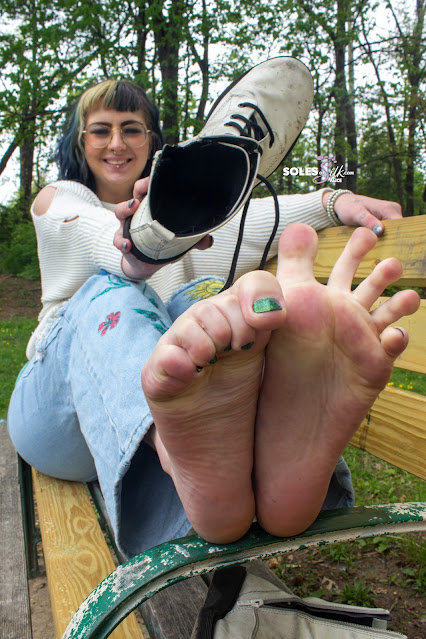 Over the last week Alice and I have made plans to shoot several times. Rain and a few other issues have caused us to postpone several times. Today looked to be promising, but the steady rain over the weekend lingered longer than the forecast predicted. It was also a chilly 49 degrees. Nevertheless, I was determined and asked Alice if we could at least get in one, maybe two sets. She said sure and I was so happy to be seeing her again. It's hard to believe our last shoot came in 2018. Like Mindee, I had so much of Alice I was able to prolong publishing them throughout 2019, 2020, and even one in 2021. If I have it my way, I'd like to build up a ton of sets with her again.

With it being so cold, a few of the ideas I had for sets weren't ideal. I, instead, told Alice to go ahead and wear long sleeves and jeans to be comfy. She said had a pair of boots she could wear and I figured that would be perfect. I didn't even need to tell her no socks. She did that on her own. See, like riding a bike!

I drove us to a small park and no one was in sight. I worried people might be out since it is Mother's Day, but the dreary weather kept people inside. Well, except for Alice and myself. No way I was passing up on seeing those big feet after all these years. Can you blame me?

We shot this one pretty quick. It's a simple boot removal set, but a lot of times, simple is best. I know boot fans and smelly feet fans will enjoy this one. That's not to mention fans of big feet, of course.

While I would have preferred to shoot a second and even third set today, there was no way I was going to make Alice endure the cold weather. We did made plans to squeeze in a couple of sets later this week after work. The forecast isn't calling for rain until Friday, but the temperatures show low 70's. Fingers crossed that stays the case because we have a fun theme in mind that harkens back to her debut set. Teasing Alice returns!

Hopefully this shoot blog is the first of many to come. I'd love to see Alice featured in a lot of them as I always loved having her in front of the camera. If I have it my way, I'd like to see her make her way into the site's 3K Club and beyond. She was easily on that pace before and I see no reason why she can't get back on that pace again. What do you say, Alice?