For fans of Soles of Silk dating back to the early days, yesterday's shoot will be one that excites a lot of you. Heck, it'll excited some of you from the pre-Soles of Silk days too, back when I ran The 10 Little Piggies and other various Yahoo GeoCities sites. The reason you'll love yesterday's shoot so much is because of who sat in front of my camera. That model was none other than Abby!

Although Abby debuted on Soles of Silk in 2005, just one month after the site's launch, she was no stranger to modeling her wrinkly size 6 feet. Nope! It was just that she was used to doing it on 35mm film. That and doing it back when we dated fresh out of high school in the late 1990's. As a matter of fact, Abby is one of only eight models on the Soles of Silk roster who did photos for me prior to the site's launch - appearing on The 10 Little Piggies.

So for all of you who remember those early sets and the ones that pre-date Soles of Silk, I'm sure you're so happy to see Abby back. For all of the newer Soles of Silk fans out there, I hope this return inspires you to go back and take a look at the 25 sets and 1,457 photos Abby currently has on the site. If you're someone who likes wrinkled soles, then you seriously owe it to yourself to do that!

With what we shot yesterday, Abby's photo count will once again rise. I hope that continues to happen moving forward. I'd love to see her reach the 2K Club (2,000 photos). She's someone who deserves to be celebrated every bit as the models who have already achieved the milestone. What do you say Abby?

Anyhow, let's get into the sets Abby and I were got in yesterday evening on a nice, cool day by the river. 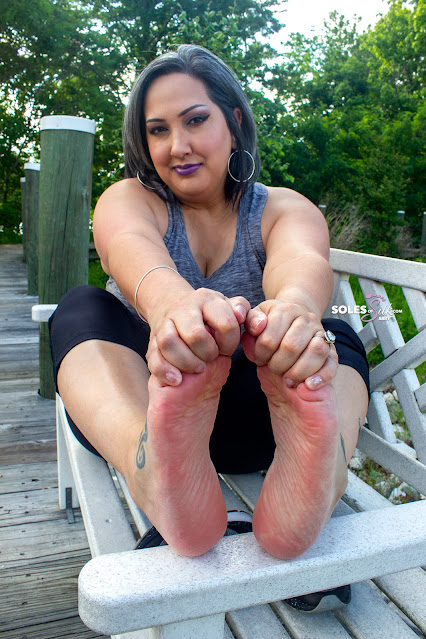 Since I am a little short on sets overall at this time, I told Abby we were going to keep things simple yesterday. I had her bring along some sneakers, which meant no socks, of course. Abby is no stranger to this, even though it has been three years since her last shoot. She's no stranger to what a lot of us foot fetishists like and would even try to make her feet sweaty back in the day on purpose both with and without socks.

We shot this first set on a bench we found along the boardwalk. We were back around a small wooded area and the river. It was so quiet and peaceful. Things were a little slow going to kick things off because neither of us could shut up. It had been so long since we saw one other. So even though we could have easily shot two sets during the time it took us to do this one, we had no regrets. Not only was I happy to see Abby to do new photos, but it was nice to catch up with someone I've called a friend for 25 years now. 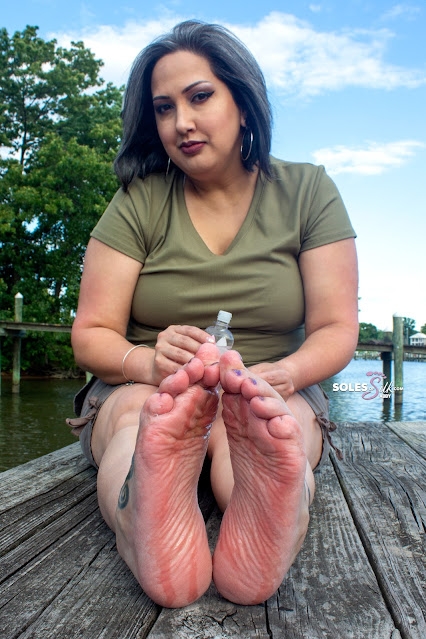 For the second set I thought it would be nice to play off Abby's wrinkles and give her some baby oil to dribble and/or squirt all over her feet. The sun was in and out of some clouds all evening. I was hoping we'd catch a long pause in the cloud cover to let Abby's feet glisten in the bright sun, but didn't end up being the case. Still, her feet glistened plenty enough with the oil really bringing out each and every wrinkle.

By time we finished up this set it was time to call it a day. Like I said above, Abby and I spent a good amount of time catching up yesterday and only managed these two sets. Sure, maybe we could have done more, but I have no regrets. It was nice keeping it super casual. We found time to reconnect for the first time since 2018. After all the world has gone through these last few years, we could all use some time with friends. Photos can wait and I hope more will be done in the months to come.

Thanks for coming back and sharing your feet all over again with your longtime fans, Abby. I am sure you're going to make some new ones too.