Something happened today that had not happened in 956 days - Mindee shot brand new photos. If you're confused, I totally understand. Every few weeks a set of Mindee has been uploaded to Soles of Silk like clockwork. Her photo count has continued to rise, inching her closer to that vaunted 10K Club (10,000 photos). But yeah, it's true. For the last two years and seven months, Mindee has not shot a single new set.

I honestly do not want to get into all of the reasons for this absence, but just know that a lot of trying things and hardships came her way in 2019. From there, the world was tossed head-first into the pandemic. Her job saw her working night and day, all while trying to squeeze in time for family and friends. Mindee is certainly her family's rock and a lot of people depended on her over these last few years. There was no way I was going to add to her stress. I told her to keep me in mind and whenever she was ready, so was I.

Now this is where having dozensof unpublished sets with Mindee came in handy. I got to finally work through that backlog we had built up for years. You know, like when we shot 40 sets in 2017, 10 more in 2018, and then nine in 2019 before things came to a pause? That's 59 sets and they took some time to get onto the site.

Here in 2022, however, Mindee's backlog had been whittled down to one final set. It's this week's update, as a matter of fact. I decided to go ahead and post it next since I knew Mindee and I would be shooting today. And talk about a day I've been excited for this whole weekend! Sure, I have shoot more than 120 sets featuring Mindee, but I wouldn't trade any of them for the world. I'm not lying when I say that every one of those shoots was an amazing time, with an amazing friend. We've had so much fun doing those sets and I'd shoot another 120 without question! Honestly, I hope that does indeed happen.

Now, let's get into today's shoot because you will definitely want to see these! I teased Mindee while setting we set up my lights that she might be rusty after all this downtime. She denied it outright and turned out to be 100 percent correct. I mean, damn... Today's sets... Wow! 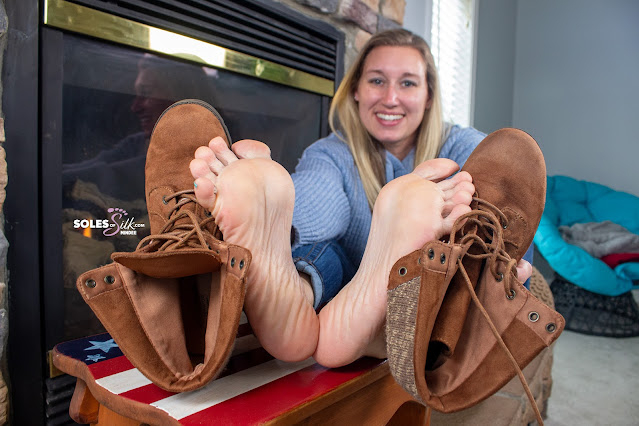 Set 1: By the Fireplace

In the day leading up to our shoot, Mindee and I had planned out three shoot themes. Those themes can be scene in Sets 2-4. This set, however, was a spur of the moment one upon seeing Mindee's brown boots. You know me, I'm a sucker for a pair of warm feet, fresh from some sneakers. Well, boots are just as good and to make things just a bit warmer inside those boots, I had Mindee shoot this one next to the fireplace.

There may have been snow on the ground outside, which Mindee refused to shoot in like she did back in 2005, but she was all nice and cozy inside. And yes, those feet got nice and warm as I had hoped. I should know, I spent a good, long time rubbing them for her. We honestly could have probably done a fifth set had Mindee's size 8's not spent so long in my hands. Can you blame me though? Not only were these sets overdue, but so was rubbing those heavenly feet. Thanks Mindee! 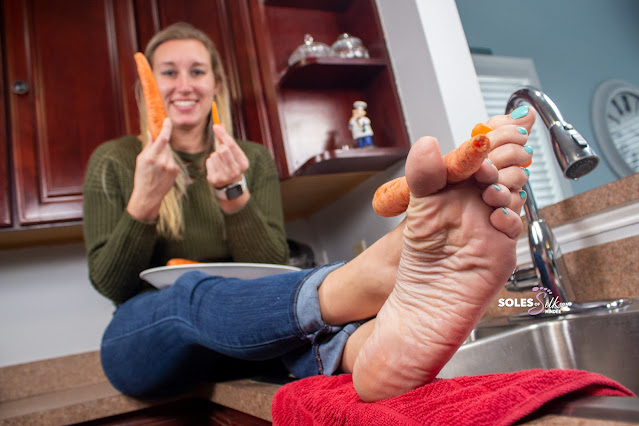 This set, like the one below, was inspired by something I saw on the internet just a few days ago. I found a graphic showing baby carrots next to large, full-sized carrots. Of course, it gave me inspiration for a size teasing theme. Would you expect anything less after Emerald's Banana, Ava's Kit-Kat, or Alice's Hot Dog sets over the years? Why not carrots?

When I sent Mindee the carrots graphic she replied with a tears of joy emoji followed by one of a carrot. Naturally, that meant she was game and I knew I was going to the store to buy some carrots Sunday morning. That wasn't all I had to pick up at the store, however. I also had to buy glue and some finger cots. If you're confused, you're about to see why. 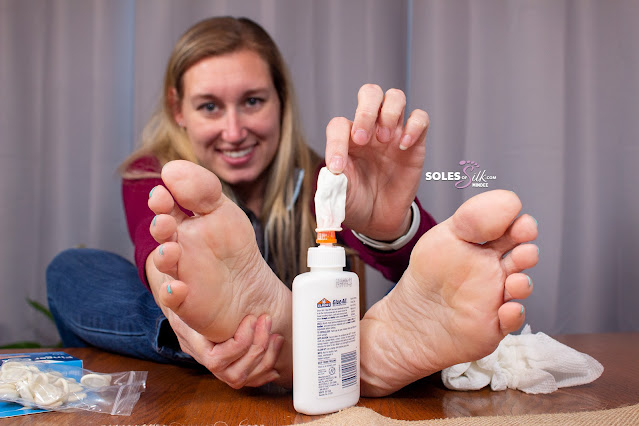 The same day I sent Mindee the carrot graphic I also sent her a naughty meme. Which you can see in the Tweet I posted to the Soles of Silk Twitter account (@SolesofSilk) just prior to writing this blog:

Ever want to know how Mindee & I come up w/ some of our shoot themes? Sometimes it's based off our conversations & texts. Found this meme & sent it to her Friday night. She replied as shown. So guess who did a glue dribble set? She did!#footfetish #fetish #feet #soles #toes pic.twitter.com/mFAUacazHn

With Mindee showing her displeasure over the thought of us leaky boys, I figured we needed to do a set with a glue bottle too. Yeah, it's really that simple for us. My first idea was to have her pour glue on her feet as punishment for that reaction, but I know better than to try to "punish" Mindee. She's my boss. My mindset quickly changed to supporting her reaction and wanting to showcase it in the set itself. My solution? Those small finger cots, a.k.a. finger condoms. One would fit perfectly over the tip of the glue bottle and Mindee could stop any of that yucky glue from dribbling out all over her feet.

Okay, so carrots, baby carrots, a bottle of glue, and finger cots were on the morning's shopping list. There was still one more item, however. Blueberries. 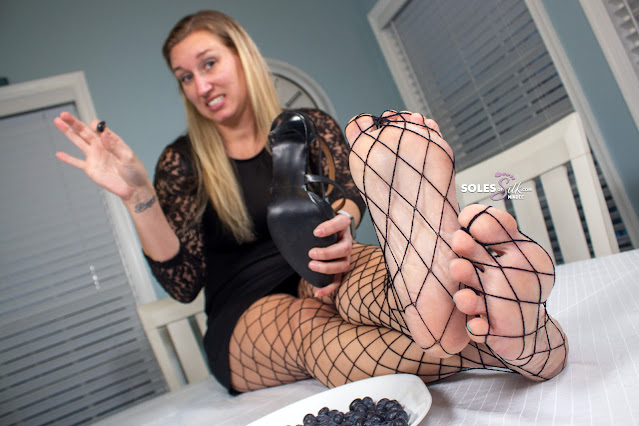 They're small, they're blue and boy do they ever smush! Blueberries have found their way into a few other sets on Soles of Silk over the years. In 2005 Cierra was featured in a set where she smashed a Blueberry Pie. Seven years later, we decided to call back to that set with one featuring her smashing Blueberry Pancakes. Still, no one had ever smashed just plain old blueberries. That was, until today.

Jumping up on the table, Mindee was in mean girl mode and made sure those little blueberries didn't stand a chance. Between getting trapped in her black fence net pantyhose and being stabbed on the sharp heels of her sandals, no tender berries were left unbusted. And don't worry, no shoes were ruined in this set, only those worthless little berries - as it should always be. Shoes are too precious. Berries, not so much.

As you can see, today's sets were super fun and had lots of teasing throughout. Not only is Mindee not rusty on modeling, but she's not rusty on teasing her photographer either. We had a blast and know so many of you are going to enjoy these sets every bit as much as we did shooting them.

Mindee and I aim to shoot again regularly here in 2022. I couldn't think of someone better to kick off the new year by shooting the first photos of 2022. It's been long overdue and although she's still a very busy woman, I think today was a day we both enjoyed and needed very much. You're amazing Mindee! Thanks for today!