Back in 2016 I shot photos of Noelle for the first time. It was a day where Mindee introduced us, along with her sister-in-law, Rilynn. I shot them each solo, along with some team up sets over a couple of days. Since then, however, Noelle and I haven't shot.

Today has been long overdue. When Noelle and I began chatting about a return a few months ago, we were both super excited to make it happen. And not only did she return today, she modeled for four great sets and is aiming to do more. She has even been trying to recruit a few relatives and friends of hers in becoming models for Soles of Silk too. It looks like two of them might be on board so far. I'll be sure to keep you posted. Now, onto today's shoot. 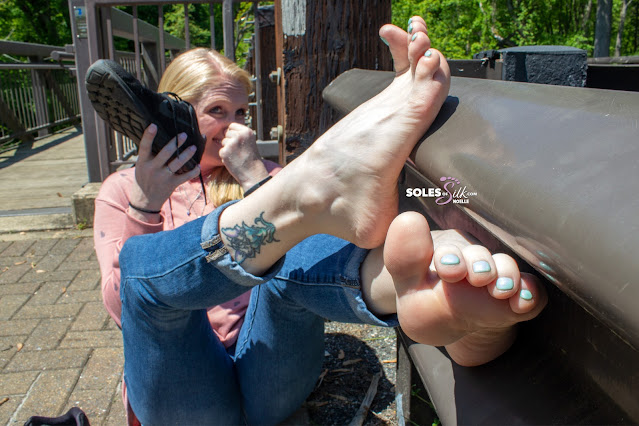 I arrived a few minutes before Noelle and scouted out the areas I was wanting to use for each set. I went with a long foot bridge for the first. The sunlight was hitting it just right at the time and it was close to the parking lot. Something easy to kick things off after almost five years.

One of the best parts of this shoot, other than Noelle's sweaty feet, was the fact that the bridge for cars was a few feet away from us. It's not what I'd call a busy road, but there were certainly a handful of people who saw Noelle sticking her bare feet towards my camera. I wonder if any of them had foot fetishes?

Oh, and I almost got a splinter in my butt on the bridge. I scooted over for some hikers and a piece of wood ripped a small hole into the back of my shorts. Details you wanted to know, I'm sure! 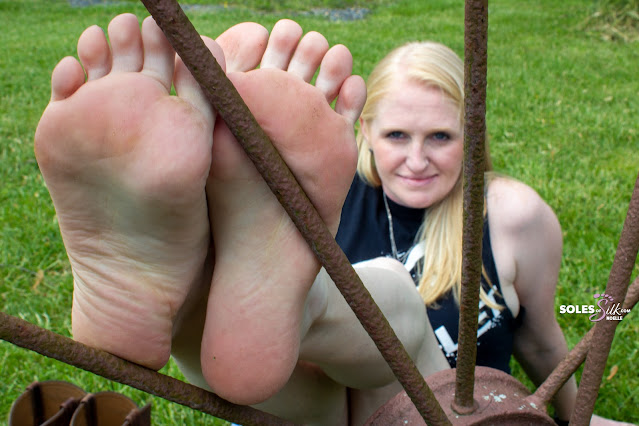 Up next was a set that Noelle wanted to do, and was the main reason I chose the location that I did. She wanted to use her cowgirl boots in a set. I said no socks and she said, "Of course!" With that, I really wanted to shoot this set too.

This set was split between a few different spots on the grounds of an old mill. The first spot, which you can see above, was on some old rusty farm equipment. The second and third spots were in the ruins of the old mill itself. The mill has only a few walls left as it has crumbled away entirely along its back end. We loved how gritty and country it looked. Of course, I loved seeing Noelle barefoot in the middle of it after kicking off her boots. 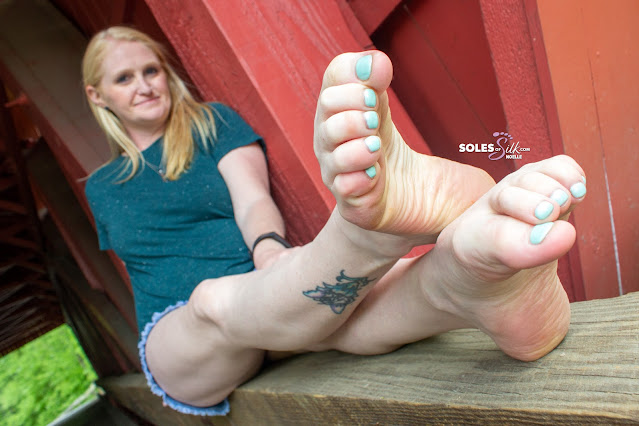 The third set of the day was supposed to have flats - again, without socks. Guess who forgot to grab them before we walked down to the nearby covered bridge, however? Yup... me! We went at this one barefoot instead. The flats we'll save for a future shoot - one I'm sure Noelle will arrive to in the flats, with sweaty feet.

On the opposite end of the old bridge, a couple of women and their kids were hanging out. Odd thing was, however, on our side of the bridge, a random stroller sat on the side of the road. It was actually in the roadway and not over the wooden or metal guardrails where we were shooting. We figured it was belonged to the women we saw and left it alone.

When we finished up, those women had not come to claim it. They were actually nowhere to be found. I even looked down in the river below to see if they walked down a trail or something. No one was there.

We're sure that every car that drove past us, which was a few, probably thought it was ours. They probably wondered if we had a baby sitting out in the roadway like irresponsible parents. It was just so strange! 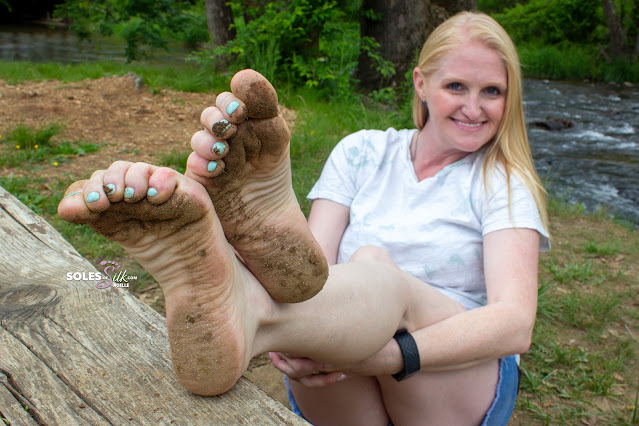 The final set of the day was always going to be a muddy set, but originally, it was going to be shot as the second part to the boots set. Part 1 was going to be the cowgirl boots and Part 2, Noelle would stick her sweaty feet into some dirt and mud. I'd post it as a series on the site, but we changed our mind once we arrived and scouted out some spots.

The old mill didn't really lend itself well to mud portion of the series. A few benches along the river, back by the first bridge we used, however, did. We scrapped the two-part series idea and just made each their own individual set.

Noelle was really looking forward to getting muddy. She's been wanting to get her feet messy for weeks. She has a few food sets planned out for the future, but this time, they got messy with dirty and mud. She had so much fun doing it too.

I loved seeing Noelle's arches remain clean when her soles picked up all the dirt. Even when she stuck them into the mud, her arches stayed mostly clean. By time the end of the set came around, the entirety of her foot bottoms were caked in some dark, sticky mud.

Once the long clean up session after this set and its video clips, which I also filmed for some bonus content, we called it a day and said our goodbyes. Like I said to start, this was long overdue. Both Noelle and I had a blast shooting today and are looking forward to getting in some more sets, both solo and hopefully with some of her relatives and friends, moving forward. You won't want to miss whatever we do.