I joked with Allie a couple of days ago that she was currently in third place for the end of the year Star Model placements. She went from leading to last with Ava's four sets and Noelle's four from her return on Tuesday.

Naturally, she did and even managed to move back into the lead by a single set. We shot two new sets just a few hours ago. I met up with her after work and she was wearing her white Converse, without socks, already. That was going to be our first set of the day, so it was nice that those little size 5's were already getting nice and moist inside those shoes. Gotta love it! 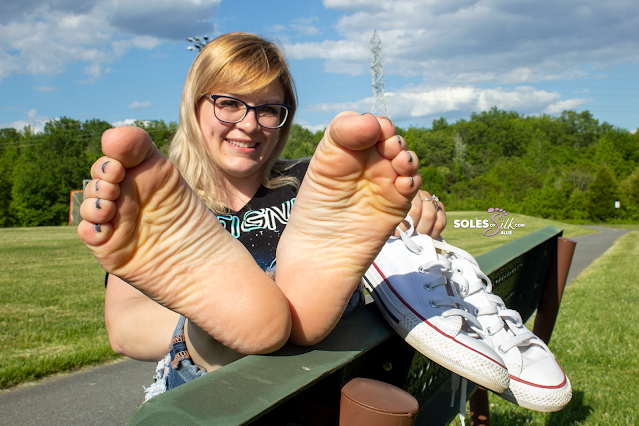 Allie and I met around 4:30 p.m. at a rec center. From past experiences, I knew we had about an hour before people began showing up to use all the ball diamonds and walking path. This was the same area where Ava and I shot a few weeks back.

Even though we still had some time before the crowds, Allie and I decided to walk to the far end of the park and use a bench far away from the parking lot. We figured she'd be less on display back there if anyone came early. Aside from a few people walking, that turned out to be true and we flew through this set - minus the times where the wind blew. I swear, Allie always shoots on days with a decent breeze.

Naturally, I love this set! If you like worn, smelly shoes, then you're going to like this set. I told Allie I wanted her shoes in every single photo. So you'll see her smelling them, beckoning you to sniff them, and she has them under and on her feet in every single photo. We went the extra mile to make sure they were front and center in the majority of the set. I think this is something I'm going to try to make happen with other sets moving forward that feature shoes, socks, and other footwear too. 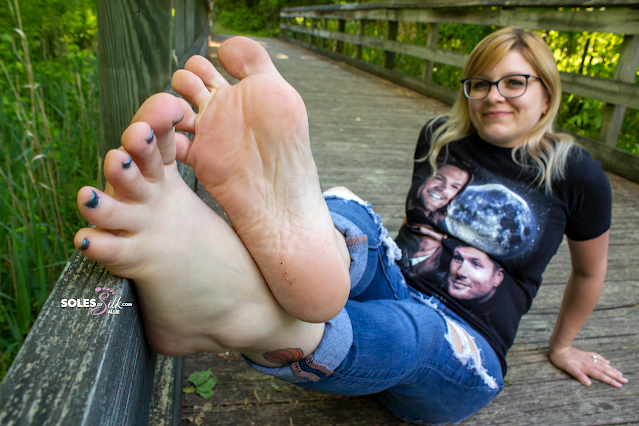 Set 2: On the Nature Trail

The original plan for the second set was to do one with flip flops. After walking around the rec center for a bit, we saw a trail going back into the woods. A few feet into this wooded area was a long wooden bridge. No one was back there and the lighting was perfect. I told Allie she could save the flip flops for another day and let her feet get dusty/dirty in this one instead.

Without much to interact with here, most of the photos in this one see Allie either walking on the wooden planks, with her feet up on the rails, or laying down with her feet kicked up behind her. And even though the bridge was covered in some light dirt, Allie's feet only slightly dusty. This isn't a super dirty themed set, although Allie still needs to do one of those here eventually.

So now that Allie has reclaimed the early Star Model lead with her fifth set of 2021, how long will she keep it? Time will tell. Ava can't wait to shoot again and as you read a few days ago, Noelle has some plans to shoot with her friends and cousin. Alice and Ginger have also mentioned getting me some dates before long. I hope it comes down to the wire with all of them and any other models that make a return, or even new ones, moving forward.