Earlier this week I met up with Ava and shot her first sets of 2021 (see blog: "Tuesday's Shoot - Ava"). In that blog I mentioned that she and I were getting back together again on Thursday to shoot a few more sets. After that blog was published, however, we decided to push the new shoots to Saturday.

Today's shoot, Ava's first ones indoors, came out amazingly yet again. Ava's sets have always been great, but ever since the ones we did last year, I feel like she's stepped things up a few notches. I'm sure you'll agree when you see the samples from these newest sets. 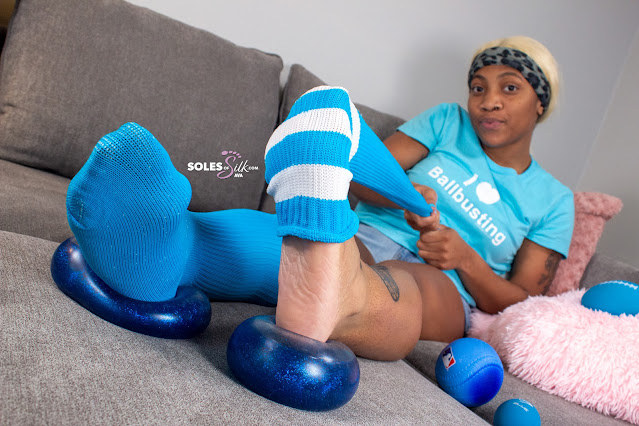 On Tuesday, I mentioned a shoot theme that we decided to save for our shoots later in the week. The set above was that theme. I had a feeling that if we had tried to shoot this set at the rec fields on Tuesday, a bunch of people would have been in the area, or come after we began. While I don't mind shooting in public places, I don't like to draw extra unwanted attention. A shirt that reads, "I Love Ballbusting" would probably have done just that.

Now you've probably seen a few of these ballbusting and blue balls themed sets on the site over the years. They're always fun to do and give the models a chance to toss around some insults and attitude. Ava has wanted to do one since her debut and now she finally has. Her size 9 feet sure smashed the biggest and smallest of the balls... the ones on the couch, obviously. Well, I'm sure her feet would destroy other ones elsewhere too, but I do keep my sets playful! 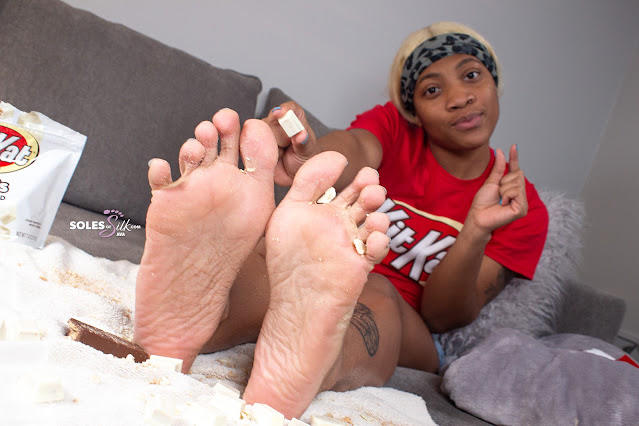 Today didn't see Ava display her mean and teasing side just once. Nope. She got to do it twice. Ava and I had planned this set last fall, but never got to shoot it. The idea was sparked when I saw a bag of mini white chocolate Kit Kats sitting next to some of the Big Kat Kit Kat bars. My mind always sees naughty jokes and Ava thought it was just as funny when I shared the idea. Then I found a Kit Kat shirt and it was a foregone conclusion that this set theme would be Ava's at some point in the future. And now it has been shot.

I won't get into too many details here. I'm sure you can see the playful theme taking place in this set. Don't worry though, it wasn't just those small white chocolate ones that met their demise between her size 9's. Not at all. Those Big Kats also were owned between Ava's soles and toes. The thing is though, they at least got some attention from her soft feet. The white chocolate ones just sat all around her feet, unless Ava decided to squish them into dust.