A Major Case of Blue Balls?

In 2014 I had some blue balls. Well, I've had them a lot in my life, but in 2014 I was in a store and had a shopping cart full of them. Mindee and I had the idea to do a sports themed set featuring nothing but blue balls. We figured the symbolism would be evident and the theme, funny. We were right on both accounts. What the cashier thought that day I pushed that shopping cart up to her register, a girl in her late teens, I have no idea and I don't want to know.

A year later, in 2015, I shot a set of Kaycee that was intended to be a sister set to Mindee's blue balls themed set. I hadn't yet published Mindee's set, but I had an idea. I'd shoot a similarly themed set with Kaycee, even using the same exact knee high socks that Mindee had used in her set, and then published the two sets in back-to-back weeks. The only difference in the sets was that Kaycee's set featured a bunch of multi-colored, squishy balls. I did make sure, however, to get a few blue ones so she could focus on those. 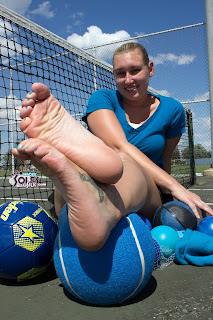 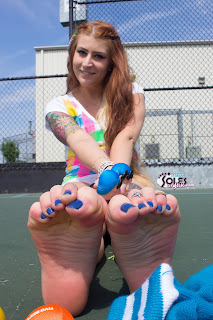 I have wanted to shoot Mindee and Kaycee's Blue Balls team up for years.

Those two sets, featured above, were a hit with so many people upon their release. That's when my mind began to race with future ideas. The one I kept coming back to, however, was doing a follow up set with the both of them together. I'd have them bring the socks back too and go to town with some more blue balls. I talked a little more in depth about this very idea in the blog, "Dream Duos #7 - Mindee & Kaycee," if you'd like to know more.

Well, those sets were published almost five years ago at this point. While I did get Mindee and Kaycee together to shoot in 2019, the first two sets were shot during the winter and the third was one summer morning before we all went off to an amusement park. That set also features Reagan and has yet to be published. Anyhow, in none of those sets did we shoot that blue balls team up finale. I know, finale with blue balls? No way! Much like blue balls, I have been left wanting... Wanting nothing more than to pair these two together and shoot that long awaited set.

Jump ahead to last week and I was looking over the 50 unpublished sets I have for the site on my computer. I was trying to figure out which set I wanted to publish with this week's update. I ultimately narrowed the model down to Alice. Which one of her sets to use was the next question I faced?

After a few minutes, I was torn between two sets. The first one featured her removing some black leather Converse shoes, naturally without socks. The second one featured her getting her feet caked in mud. I had shot both of these sets back in 2017 and that's when something in my head clicked. The set with Alice's feet in mud was shot at a ball diamond and also featured some blue balls. Then my mind clicked again immediately afterward.

In July of 2018, Jasey Rae did a feature set titled, "Captain of the All-Tease Cheer Squad." In that set, you guessed it, blue balls! Much like Mindee's, those balls were featured predominately throughout the set. How could I not thinking bigger picture here?

Why should I limit myself to a two model set with Mindee and Kaycee when two other of my models, Alice and Jasey Rae, have also done sets with blue balls? Maybe I was too tied to the idea of the shared socks between the first two sets featuring Mindee and Kaycee? I don't know! And in all honestly, there's a good chance Kaycee doesn't even have those socks anymore. But if I'm going to get more blue balls for another set anyhow, why not have four models be the cause? All four of which, I consider to be some really great friends who just so happen to love to tease.

A few minutes after this idea popped into my head, I sent out text messages to all four models. They all agreed with my outlook, which I figured they would. All four of them love doing shoots with other models and Jasey Rae has yet to shoot with Mindee, Kaycee, or Alice at this point in time. Alice and Kaycee haven't yet shot together either. It's going to be an all-star grouping, without a doubt!

Naturally, all four models were quite excited about the idea. They had this to say when I texted them with the proposed idea:

"We'd all look so good together," Jasey Rae said, getting back to me almost immediately. "I've always wanted to shoot with these beautiful ladies and I can't wait to make this a reality."

"I love it!" Alice said upon seeing sample shots from all four sets.

Kaycee kept it even shorter, saying, "Yes!" with a bunch of exclamation points behind it.

And you know that Mindee was going to be on board. She had this to say, "I'm super excited! I love multi-girl shoots and teasing. The idea of everyone being together in a four girl set is awesome."

They say good things do come to those who wait. Well, unless that ends up in a case of real blue balls (for most guys). But in the case of blue balls like tennis balls, soccer balls, basketballs, volleyballs, etc., it should be a lot less stressful. I guess seeing all four of those models together and barefoot, however, will probably result in the other ones too. I don't think any of them would be happy if that wasn't the end result for all who view the set.