I'm sticking with the criteria I used for the 2013 favorites as a guide for this series. Only sets that were published during that year will be featured, regardless of when they were shot. I'm also leaving out Wu's Feet Links Feature Model galleries. Only the sets published to Soles of Silk will be eligible. With that said, let's take a look at my favorite shoots of 2014: 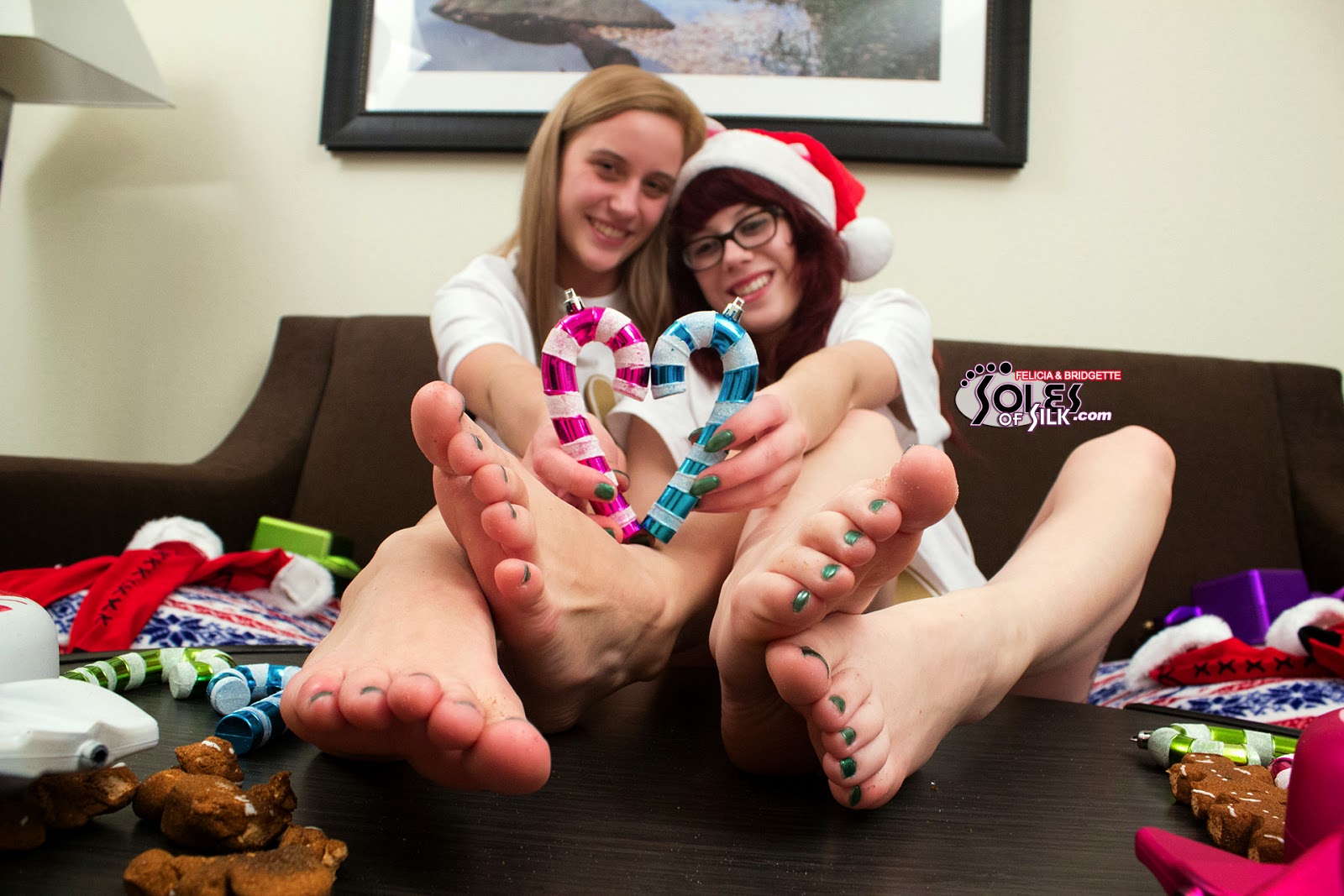 This set didn't originally appear on this blog, but was added just before publishing it. Pretty much out of nowhere, Felicia told me her twin sister (fraternal), Bridgette, was interested in posing for the site. I jumped at the chance to debut Bridgette right along side her sister in a Christmas set.

As we talked plans over last week we also decided to go ahead and do a New Year's set while we were at it. I had hoped to debut 10 new models this year as part of the anniversary celebration, but that didn't end up happening. I just couldn't resist, however, adding a new model, and a twin sister to one of my other most recent models (Felicia) to close out the year.

Felicia and Bridgette were ever so fun to shoot - something I see so much more when two models are as close as these two obviously are. Craziness ensued and this set was a memorable one in 2014 - memorable enough to land on the list even though I just shot it. 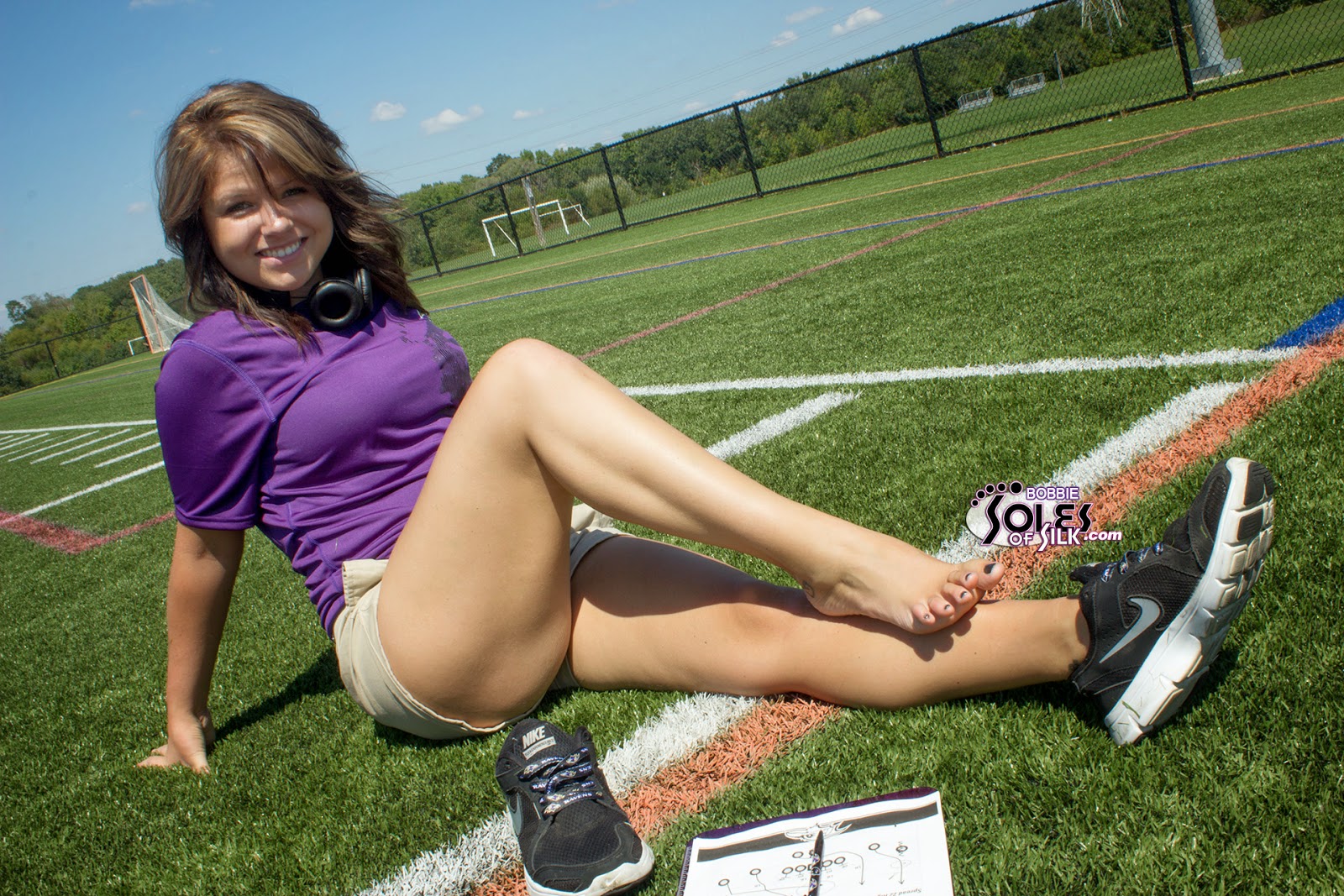 It took her some time, but Bobbie finally decided to show off her feet on Soles of Silk. We've been friends for a few years and I always wanted her to pose. We did a number of sets here in her first year and when I made mention of doing the site's annual football themed set, she jumped all over it.

This year's extra theme was coaching. We went right to the turf itself for this one where Bobbie showed off her playbook, along with those adorable feet fresh from her black Nike shoes. 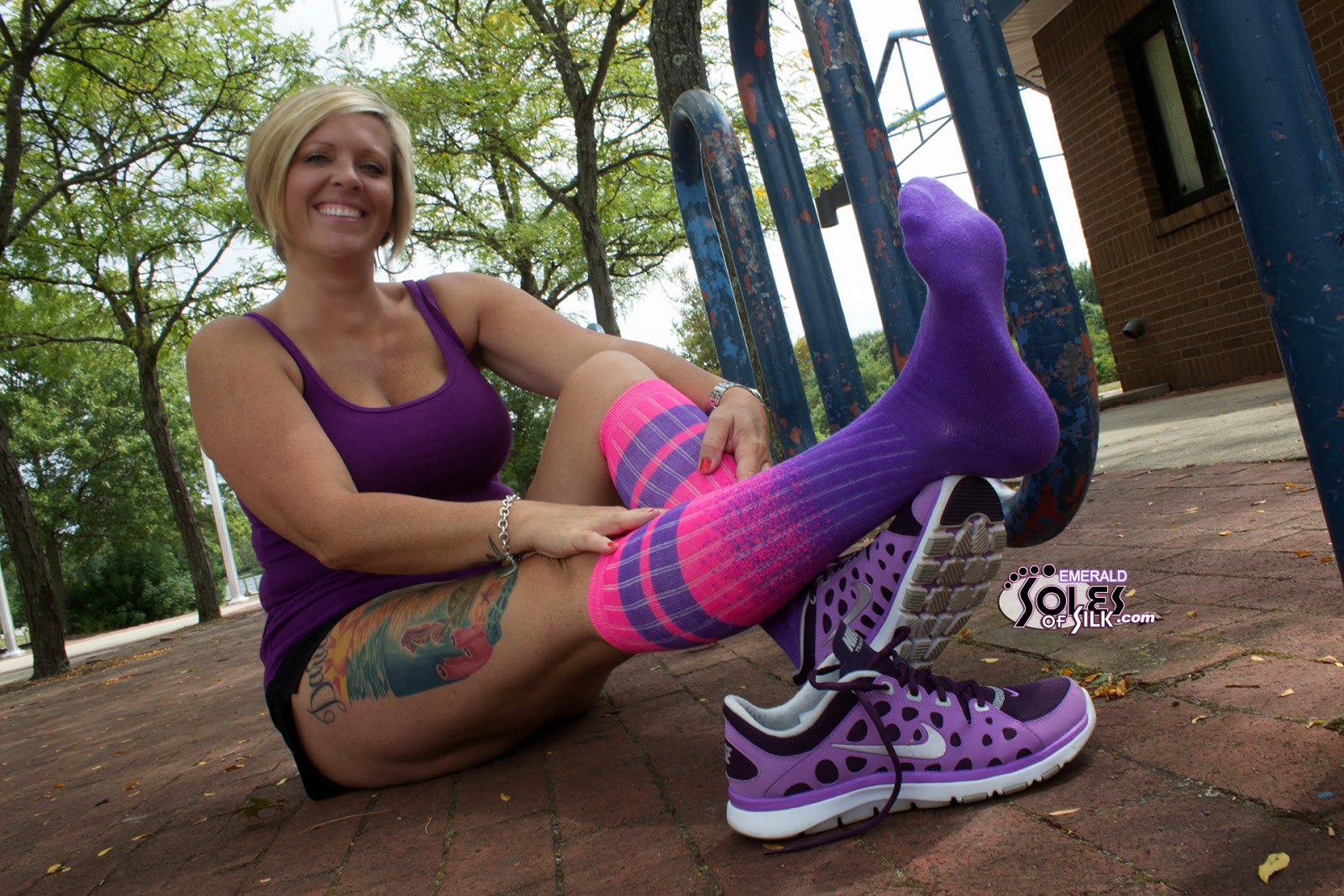 Emerald sure did kick it up a notch this year. She was already doing some amazing work, but I met up with her twice this year and did a handful of sets each time.

I had brought a bunch of these crazy socks with me to our shoot the day we shot this one and Emerald grabbed the purple and pink pair saying she had an outfit to match. Now we just had to figure where we'd shoot it.

Once we finished up our second set on the day we saw a bike rack and decided to use it. There was a bathroom only a few feet away so Emerald went ahead and changed. When she emerged, wearing all that purple with the splash of pink on those socks, I was in love. And the bike racks worked perfectly to show off her feet, not only bare, but in those socks and tennis shoes as well. 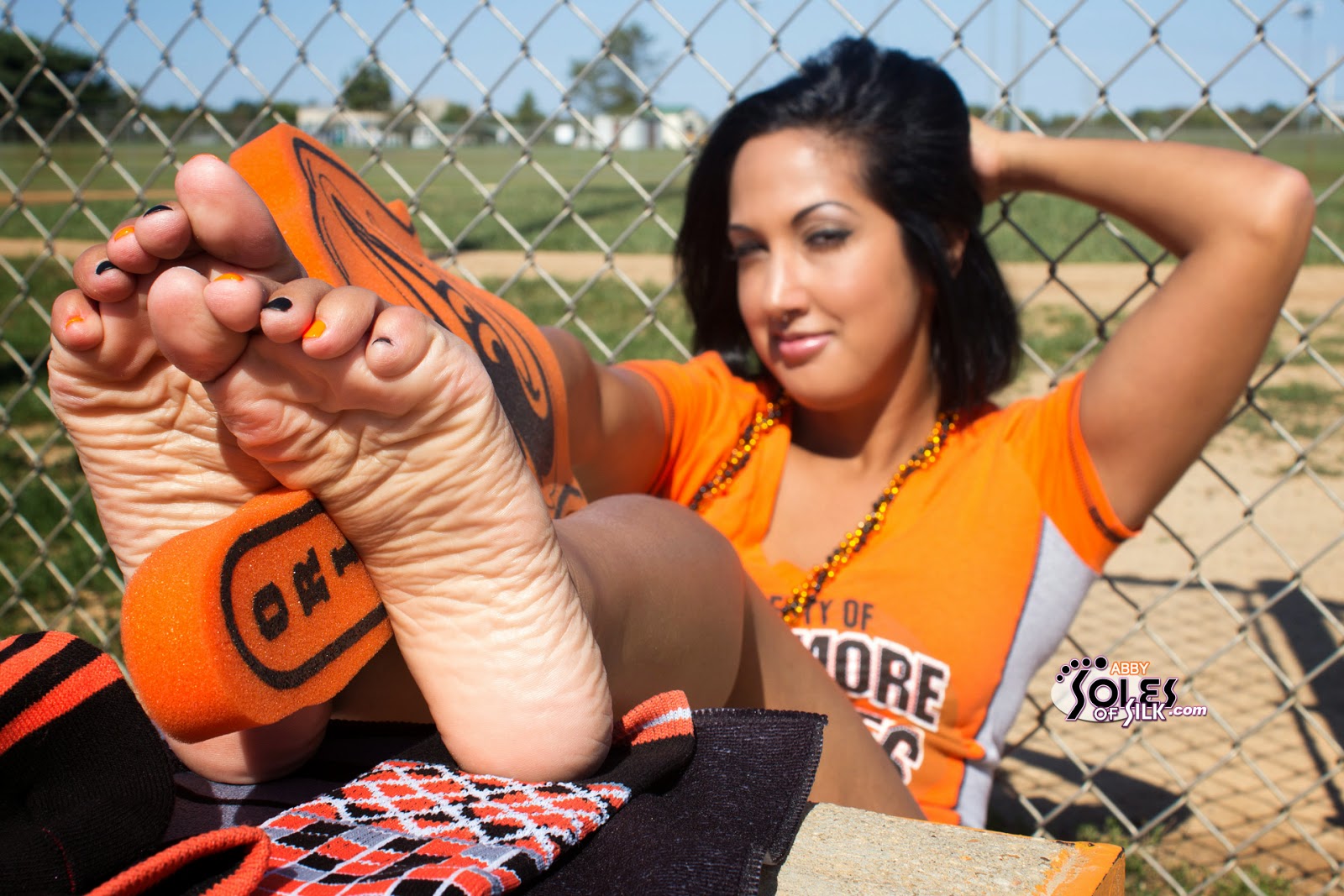 7. Barefoot at the Baseball Diamond

So the Orioles swept the Tigers in the first round of the playoffs this year and the town was buzzing. Abby and I had planned to do a shoot and it only made sense to theme it to the hometown team and show some support.

Sadly they didn't win a single game afterward, but I sure did get a winning set. It's actually Abby's favorite set she's done for the site and so many people just loved seeing her multi-colored pedicure and wrinkled soles once she pulled off her crazy socks. 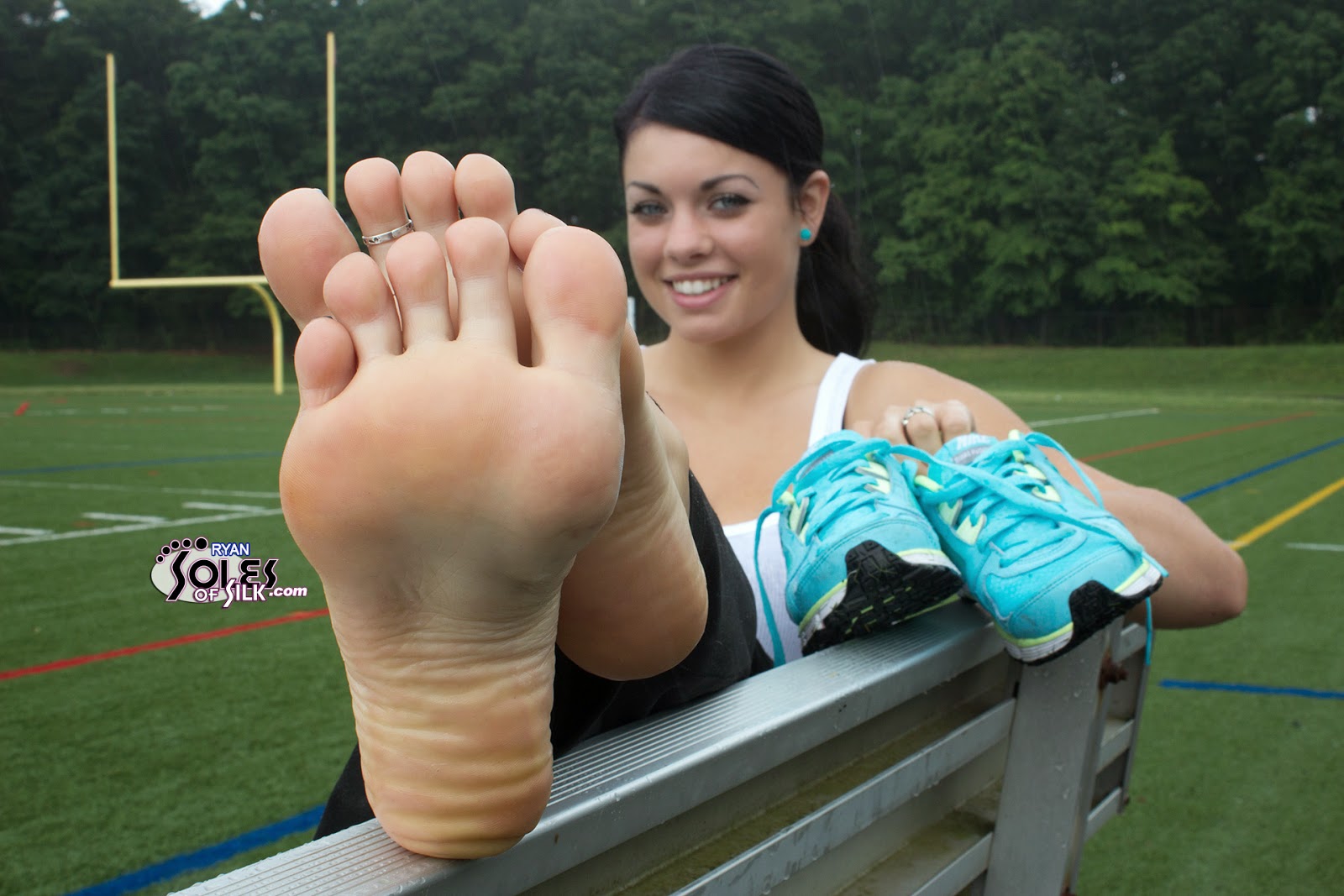 I loved this set so much, even though it began to rain when we arrived at the track. It actually made things better as Ryan was in her tennis shoes without socks and her feet were getting a little damp. If you thought sweaty feet had a scent, making them just a little wet on top of that only made the shoes smell even more. Add that into the vibrant colors and amazing poses, it resulted in this exact photo being made into the header for the site's guest section. 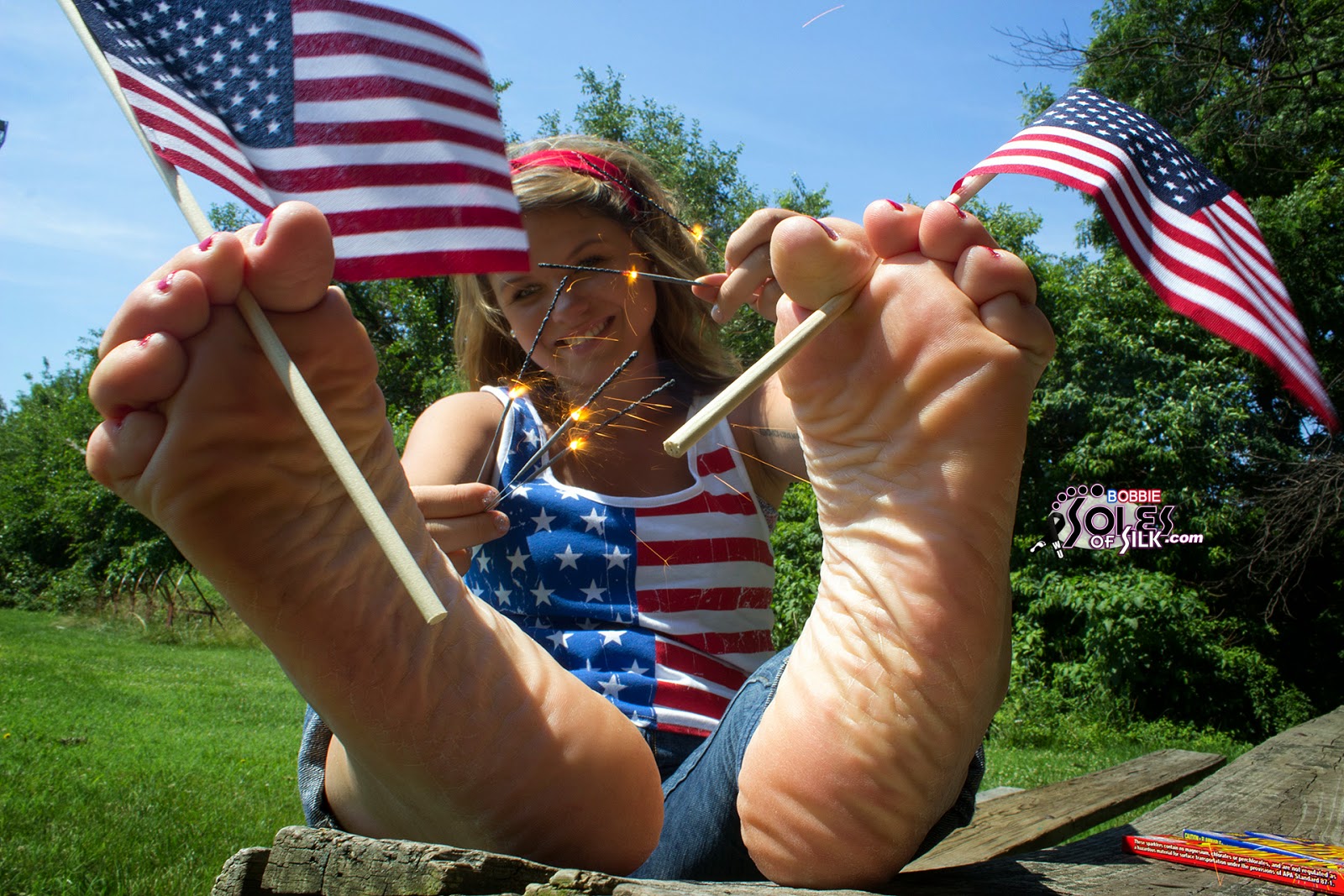 When Bobbie told me she was going to pose I asked her if she wanted to do a Fourth of July themed set as the timing would be perfect. She liked the idea and asked what I had in mind. I wasn't sure right away, but came up with the idea to do sparklers and flags about a week before the shoot.

When we met up for the shoot she threw on the bandanna and the American Flag shirt, I just knew I had something special. There was just that whole "'Merica" theme to it, and if you're from the USA, you'll know what I mean when I say that. 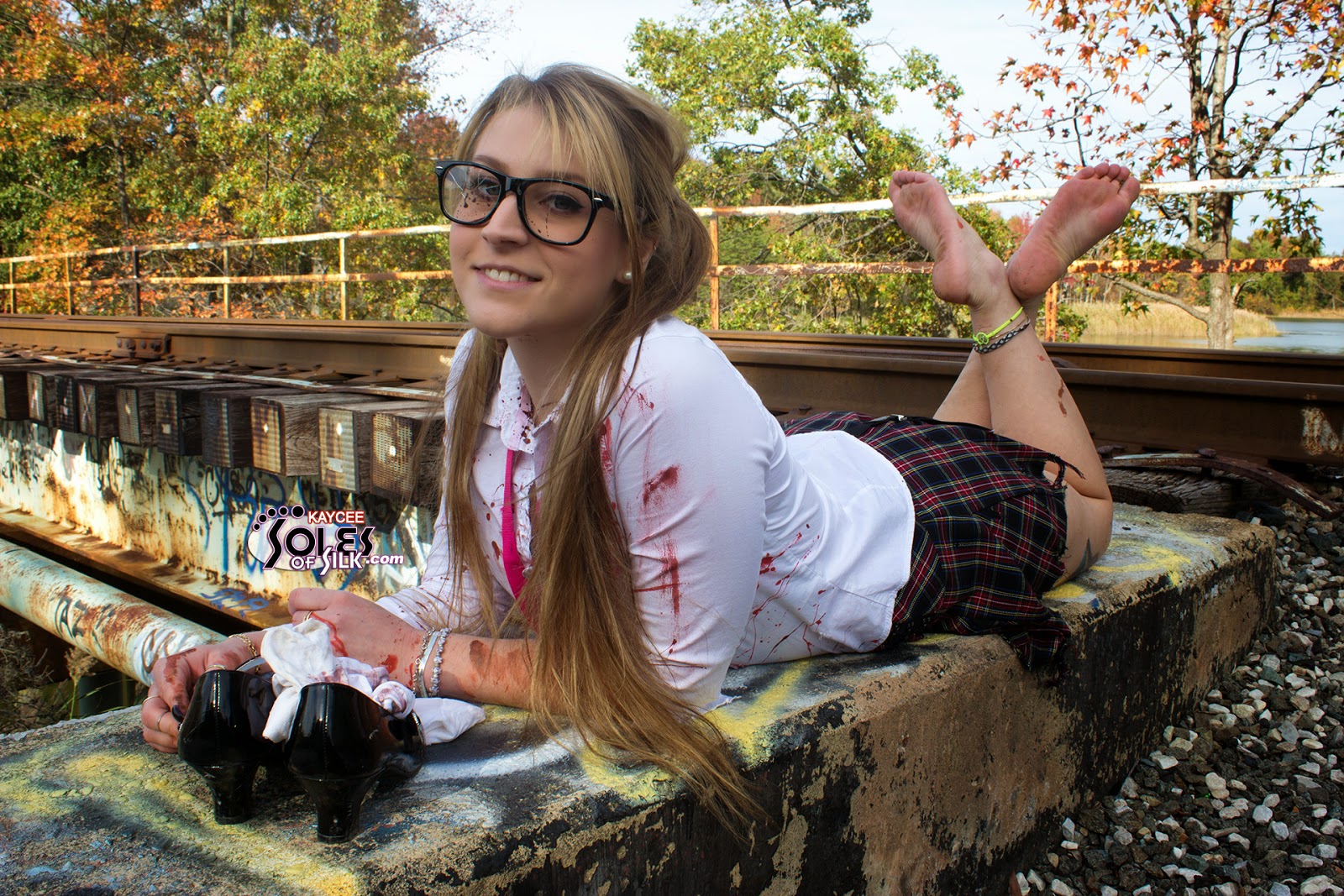 The story behind this set is a little lengthy, so I won't get into too much detail. I asked Kaycee some time ago to do a Halloween themed set and she was all about it.

As time drew closer to doing it I sought the help of Felicia, who hadn't yet posed at the time, to help us with making a costume and doing Kaycee's make up. We ended up switching themes a few weeks before the shoot, but both Felicia and Kaycee made it work!

I give both girls a lot of credit for this one and it was one fun set to be on scene to do. It certainly was one of the most unique ones I've done too. 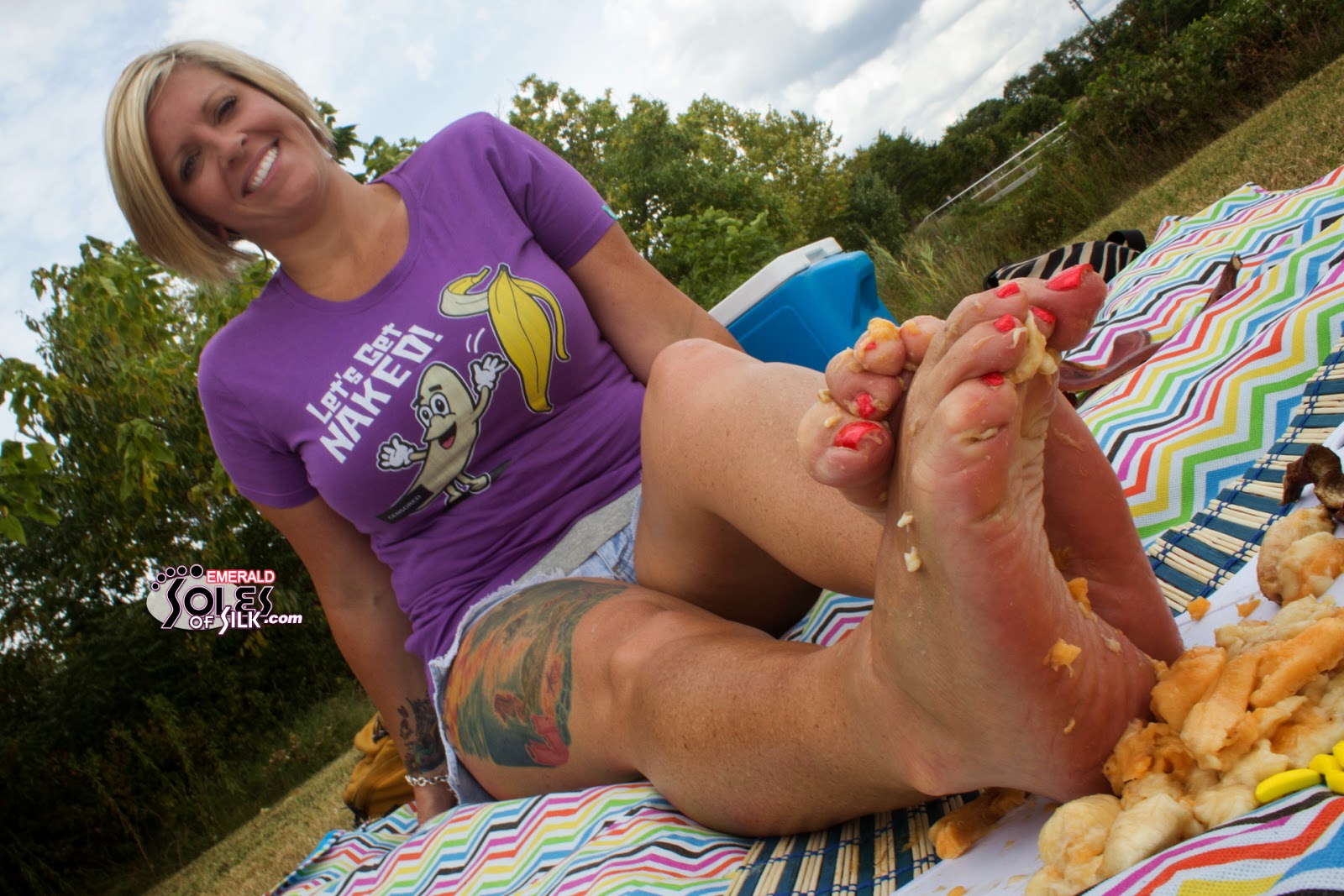 Emerald and I talked about this one for a long time. She wanted to do a size teasing set and a food smashing set. In our conversations we came up with a way to do them both and do them both at the same time - bananas. Emerald had one requirement though: The set had to be done outdoors in public. She made blush reading that stipulation in a text as I knew that would attract attention. As you can see, I gave into those demands.

While we didn't find the mini-bananas we intended to use, we did discover something neither of us had heard of before - red bananas. We also grabbed a handful of candy bananas in the lobby leaving the grocery store.

Once the shoot began at the park, I wasn't all too worried about people seeing us because I was too focused on the sight before me. Emerald was in full tease mode - something she seems to enjoy these days. I'm not complaining. Guess I'll have to find another food that comes in multiple sizes, huh? 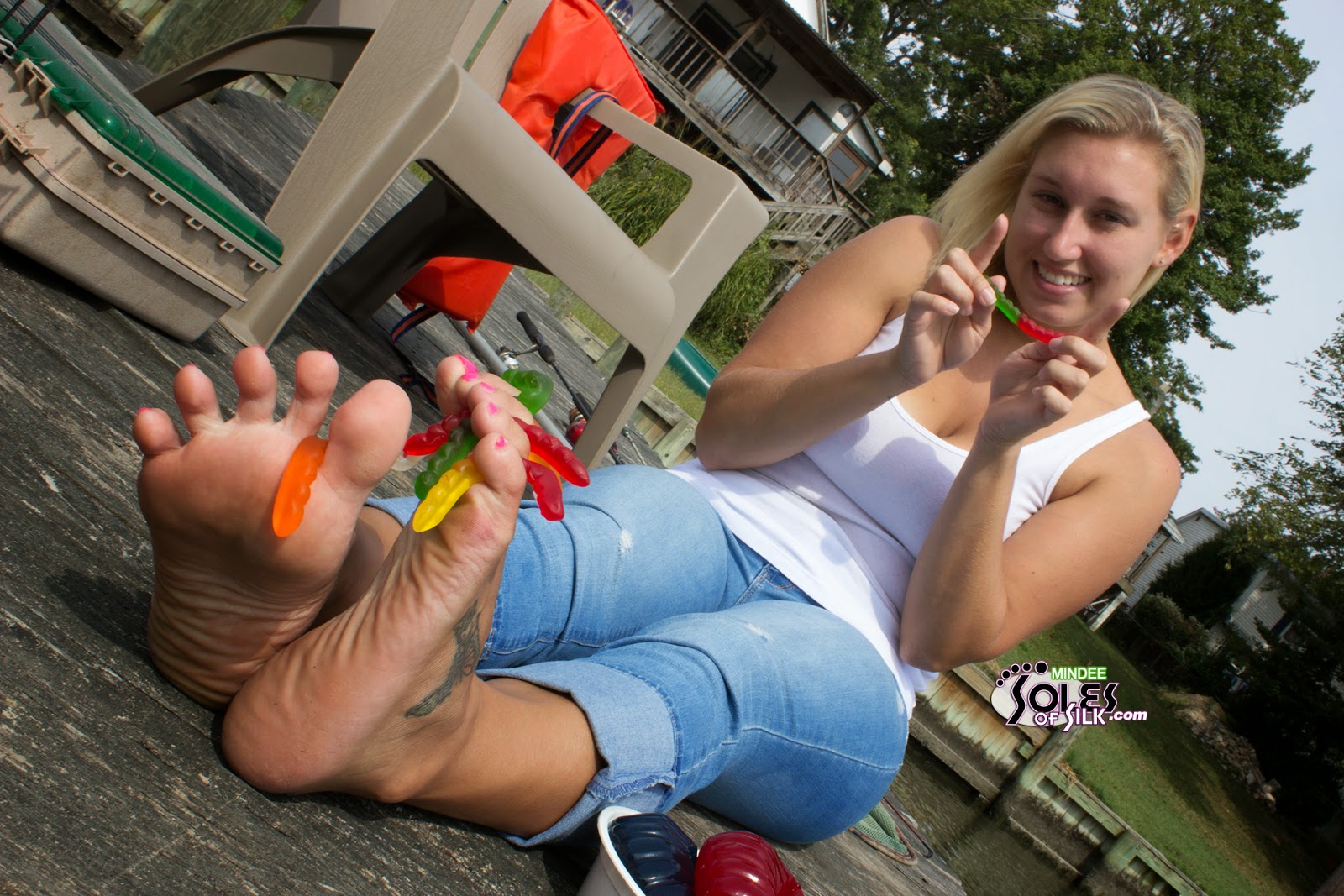 Over the years Mindee has shot a ton of photos, but in January 2014 her long awaited gummy worm size teasing set was published. She was set to take the mantle of the site's most photographed model, so I asked her which set she wanted to do it with. She picked this one.

The set is a spoof of a fishing set. I bought a bag full of gummy worms and then special ordered a 28-inch gummy worm as well. Seeing that enormous gummy worm made Mindee laugh, something she did a lot of during this set.

Mindee loved this whole concept and it gave her a chance to give it to me good. She's always enjoyed making me blush and will do so every chance she gets. Well this set gave her opportunity after opportunity to do just that. Of course, I happily accepted everything she dished out at me. She knows I adore her and loved every minute of it too! 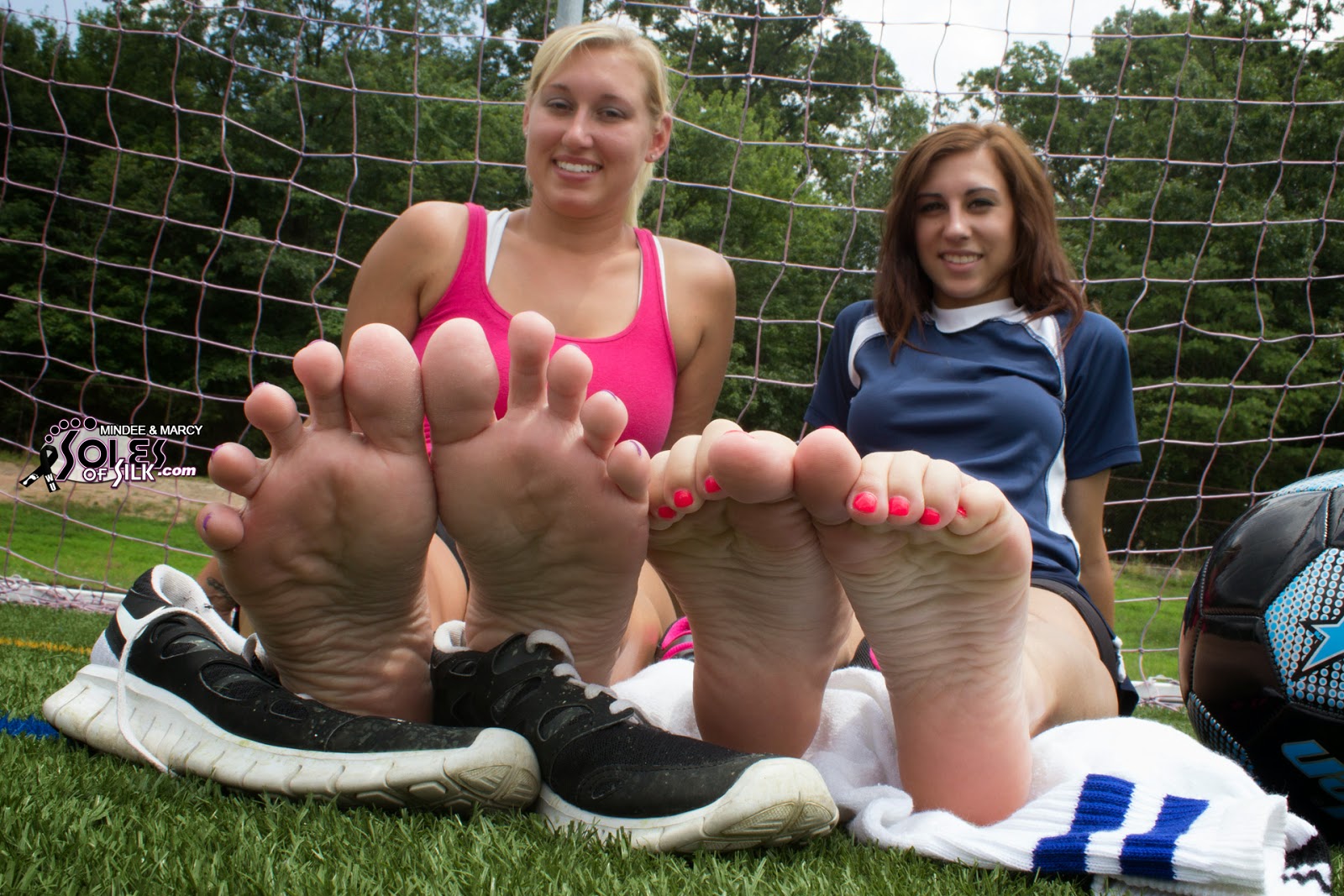 Marcy hadn't posed for some time, so when Mindee asked me if I'd like to shoot the both of them together, I jumped at the offer. After all, how could I turn down the model combo that gave me the candy canes set in 2010? (see blog: "Soles of Silk 10 Year Anniversary - My 10 Favorite Sets: 2010")

I met the girls at a school and we walked down to the soccer fields. No one was using them and the girls went right out onto the field and started kicking the ball around playfully. A few people were on the track, so I knew these two were about to attract some attention - especially if they were even half as playful as they were that day they did the candy canes set.

Well, it didn't take long for these two to start pulling off each other's shoes and socks and sniffing each other's feet. It was awesome and I didn't care if people saw it. I knew this set was a classic from the start. The only thing people hated about it was waiting until the start of the World Cup for me to publish it. Sorry everyone! Good things come to those who wait though, isn't that right?

So what photo sets were your favorites from this year? I thank you for taking a look back with me at a little bit of this site's history. These 10 years online have flown by so quick!
Posted by Soles of Silk at 11:56:00 PM