I'm sticking with the criteria I used for the 2013 favorites as a guide for this series. Only sets that were published during that year will be featured, regardless of when they were shot. I'm also leaving out Wu's Feet Links Feature Model galleries. Only the sets published to Soles of Silk will be eligible. With that said, let's take a look at my favorite shoots of 2009: 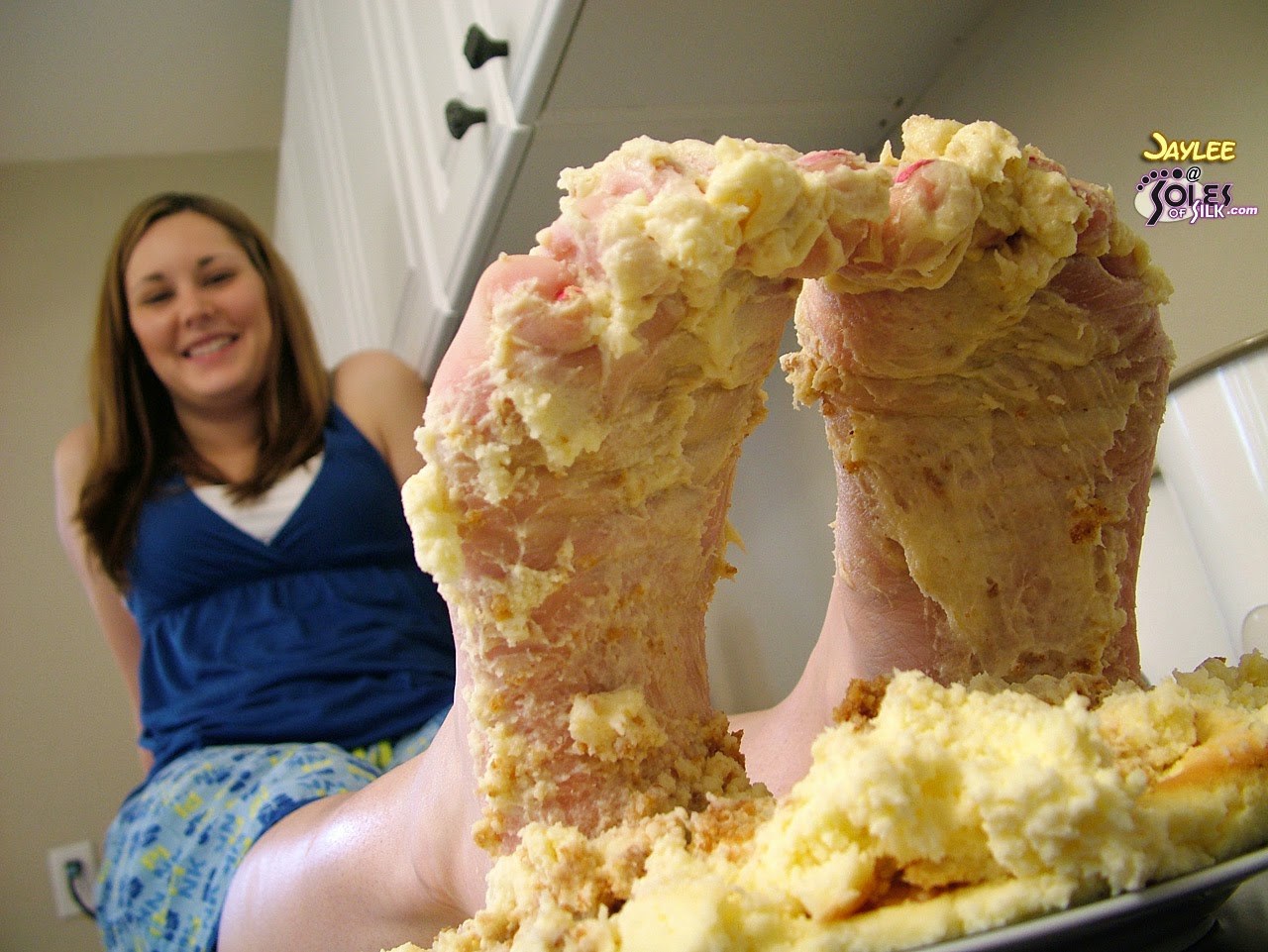 What's a good way to get one of your model's younger sisters to do her first foot fetish set? Well, after you ask her, you break her in by having her squish cold cheesecake under her feet. That's exactly how Layla and I broke in Jaylee Austin to the scene and boy did she have fun doing it.

It was such a blast watching her reactions with Layla right there in the room laughing right along with us. Jaylee totally owned this first set of hers, making a huge mess in the process.

9. Sweaty on the Courts

From one sister to another, Layla did this set on a sweltering hot day. She threw on some sporty attire and we went to some local courts for a set. We began on the tennis courts, but then a few people showed up to play tennis. I was surprised since it was so hot, but not wanting to attract too much attention, we walked over to the basketball courts to finish the set.

I couldn't believe how sweaty Layla's feet were after she pulled off her tennis shoes and socks. It was awesome seeing them glisten in the bright sunlight. I wanted to shove my nose between her toes so bad. 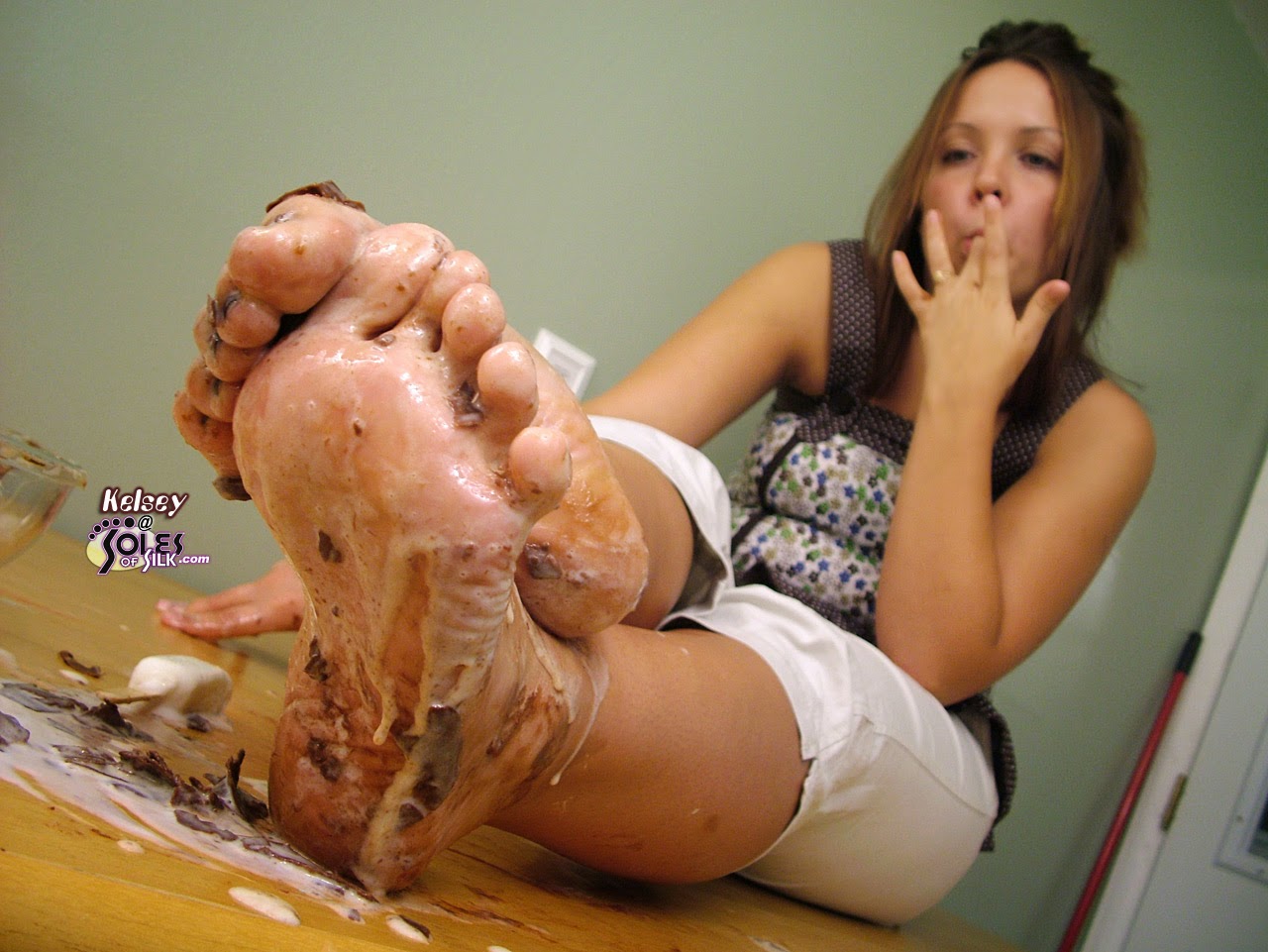 This was probably the funnest set I've shot with Kelsey - and she's done quite a few sets I'd deem as "fun."

I came up with the idea to do a fudge pop set a few days before, but when I was buying the pops I saw these small vanilla pops too. The naughty gears in my head began to spin and I ended up buying both.

The way the set turned out, let's just say the chocolate pops got most of the play as the vanilla pops were made to melt just out of reach of Kelsey's super soft feet. 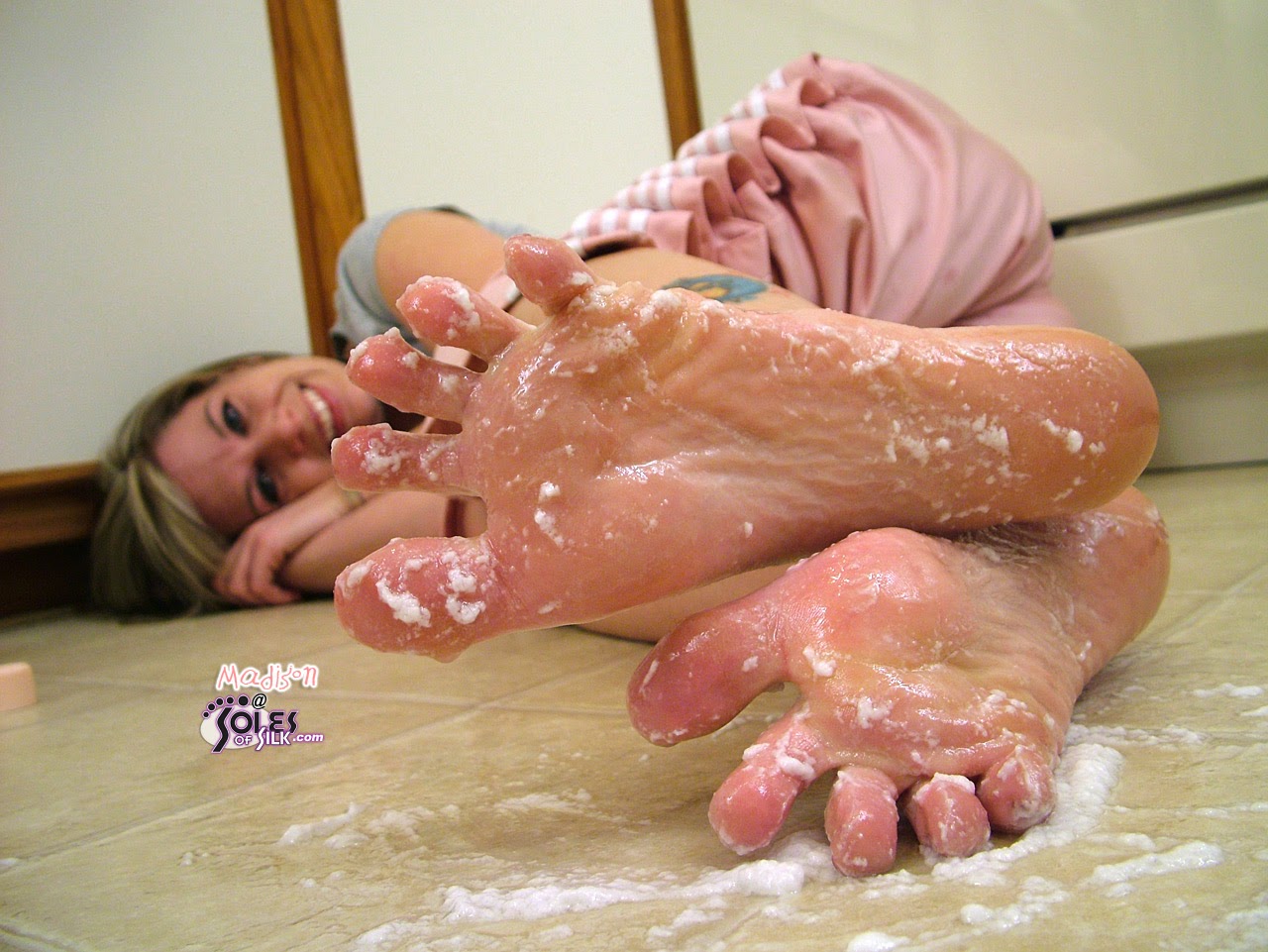 This is one of the most bizarre sets I ever shot for Soles of Silk. I've done too many sets with lotion to count. I've also done a ton of baby oil sets as well. But what if I did both at the same time? That was the question I asked myself and when I posed it to Madison, she said, "Let's find out."

Madison began the set with the lotion and then squirted the baby oil onto her feet afterward. From there we added a little more of both here and there. The two didn't really mix, causing the lotion to turn into gooey white clumps that looks a lot like something that it actually is not. But if it were, talk about a LOT of it! 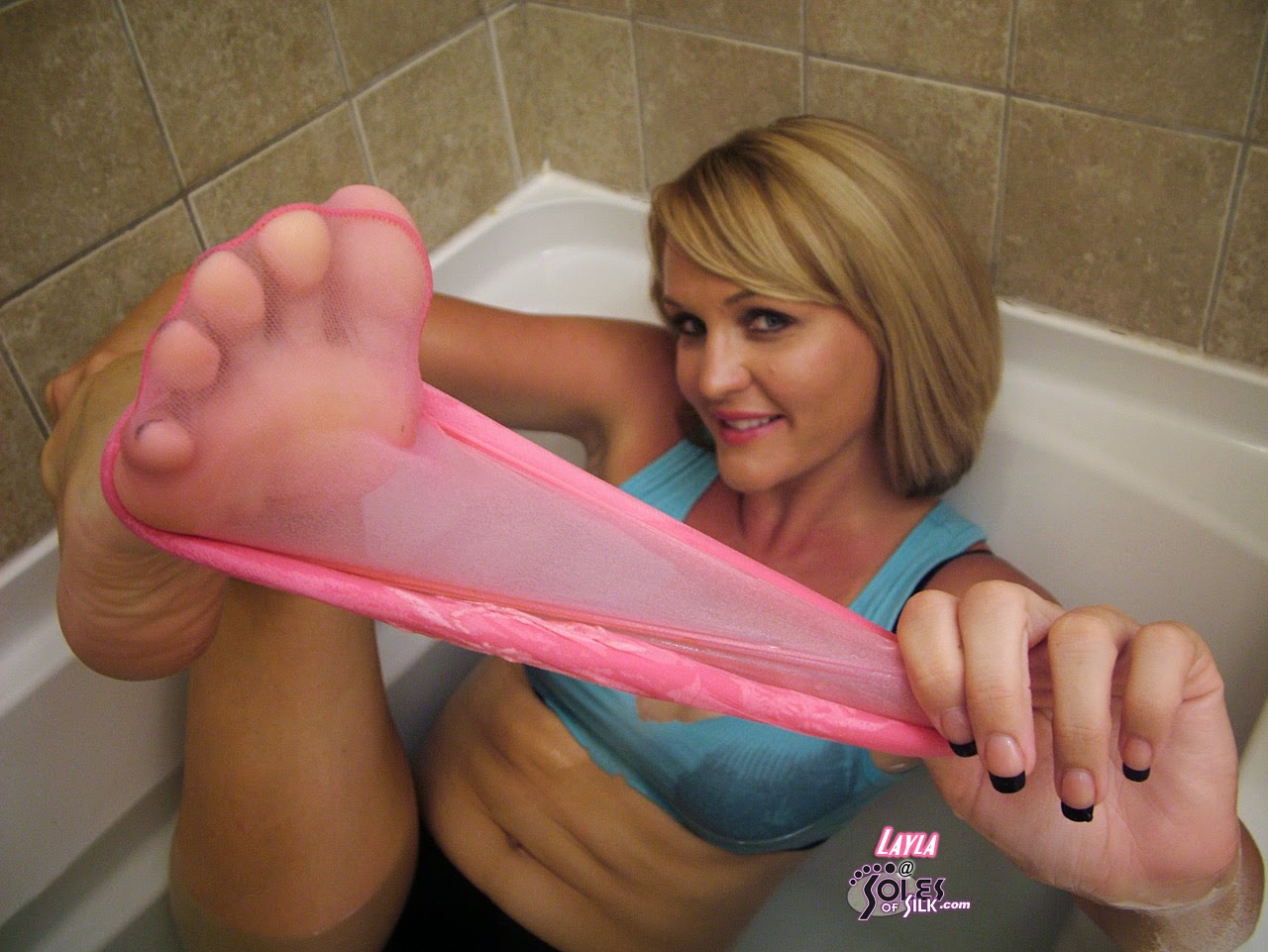 6. Stockings in the Tub

If you checked out the Soles of Silk 10 Year Anniversary - My 10 Favorite Sets: 2008 blog entry, then you already know Layla is good when it comes to bringing out sexiness in a set. That happened again in 2009 when we decided to do a wet stockings set.

Members requested this theme a few times so I bought some bright pink thigh highs to try it out with. Layla had a teal top, which I was worried wouldn't match. In hindsight, however, having multiple bright colors really made this better. But my favorite was seeing those wet stockings clinging for dear life to her curvy feet. 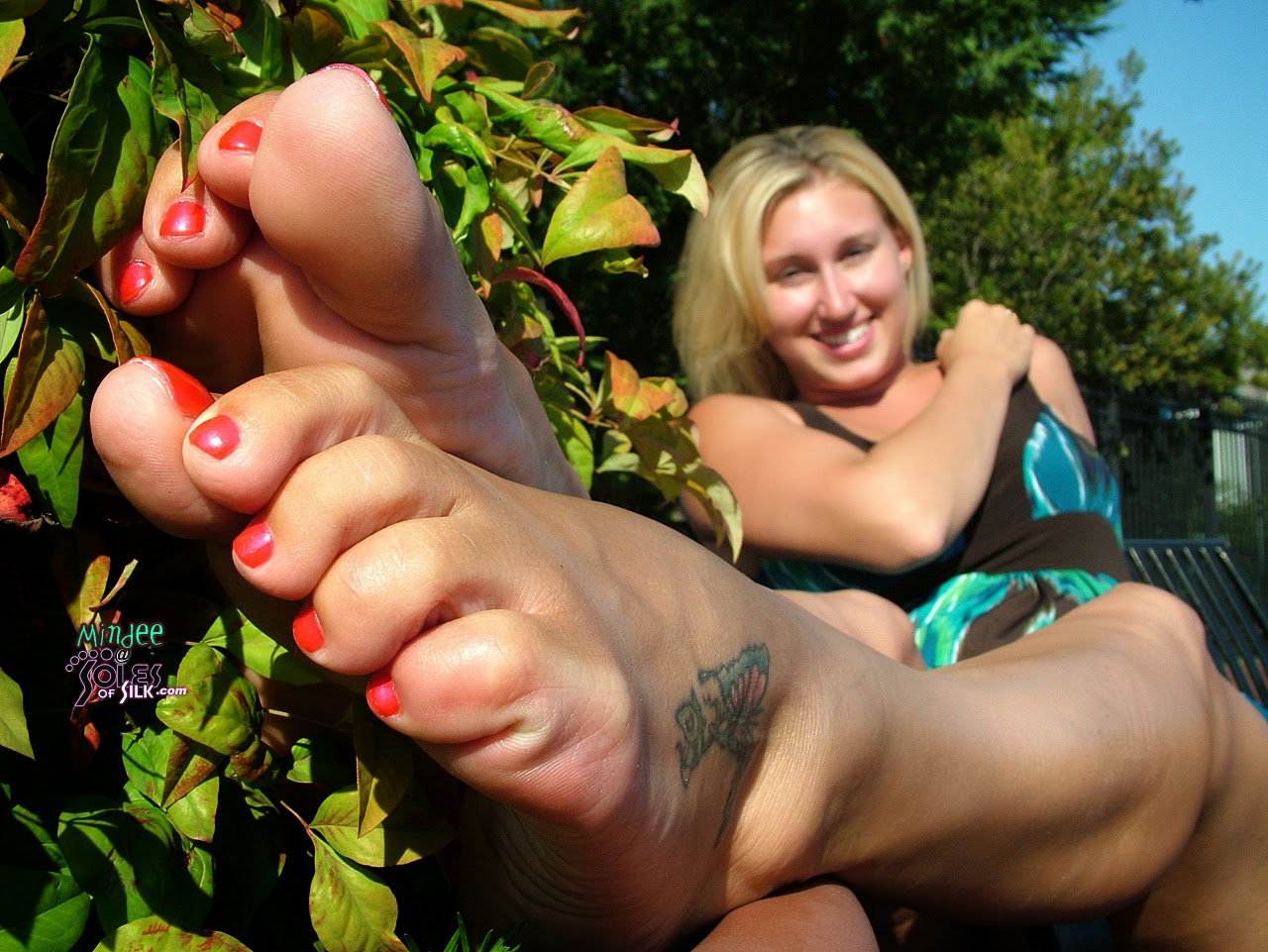 Mindee and I set out to find a few locations to use for shoots in Maryland's capital of Annapolis in 2009. This set was the first one we did, which took place on a bench right by the naval yard.

It was a beautiful waterfront location with a lot of trees and bushes on backside of the bench. Mindee's bright colored dress and toes made this one pop! Mindee looked so good in this set and it was a big hit with her fans, and even gained her some new ones. 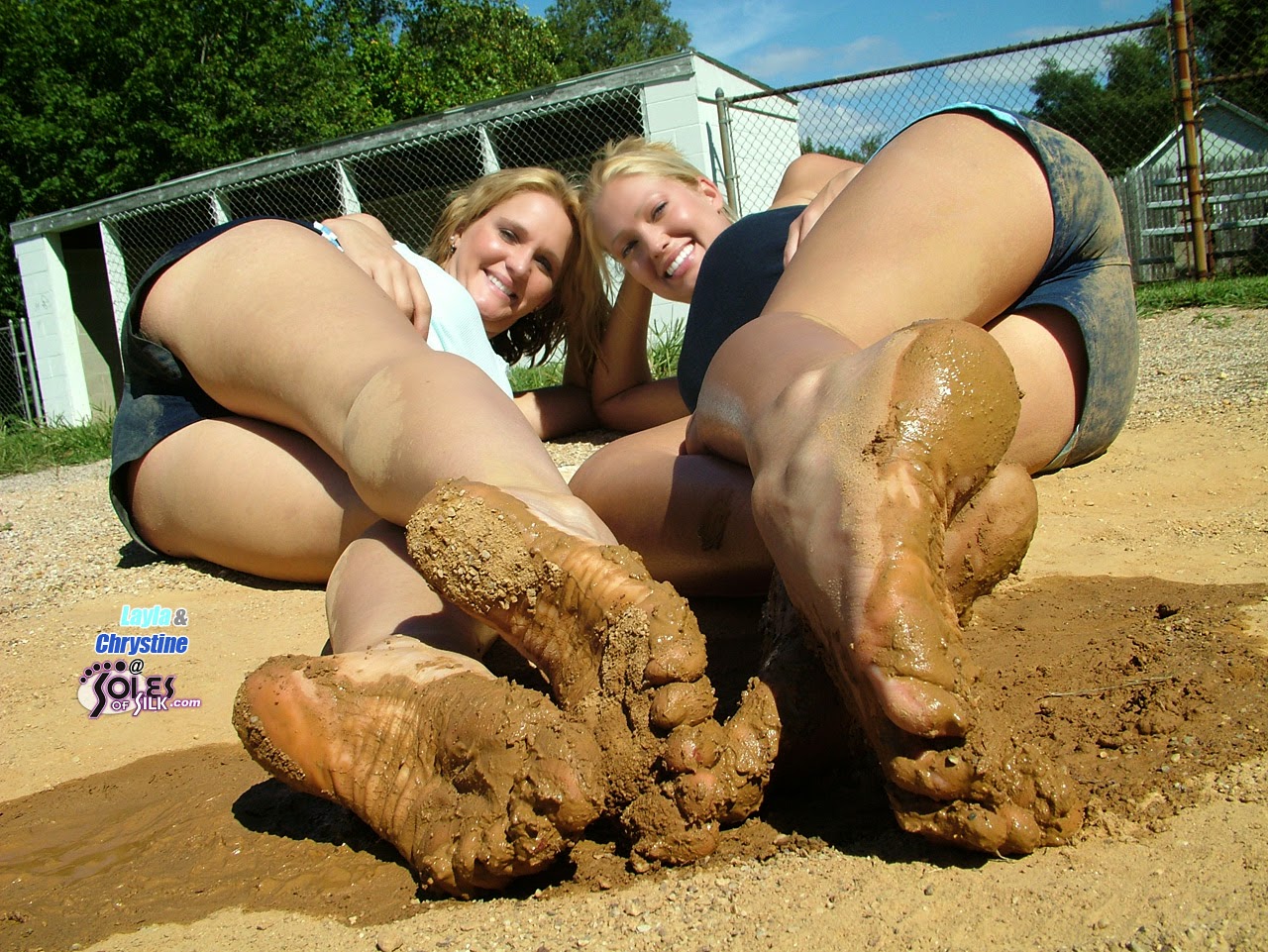 When Layla and Chrystine shot together and I pitched the idea of doing a two girl dirty feet set, they loved it. There was one issue, however. It had been super hot for some time and there wasn't really much dirt/mud around to make use of. Layla mentioned a near by ball diamond. We got in the car and went to check it out.

The girls started posing in the dirt, but it was so dry and literally hard as a rock. Luckily we brought some water bottles with us since it was so hot, so the girls began splashing the area they were standing with water. It took a little grinding of their feet into the dirt, but it started to stick to their feet - some of the dirt getting really gooey in the process.

Since it was so hot though, it dried very quickly onto their feet. It ended up giving a unique look to the dirt on their feet - something I can't really say happened in any of the other dirty/muddy feet sets I've done on the site. 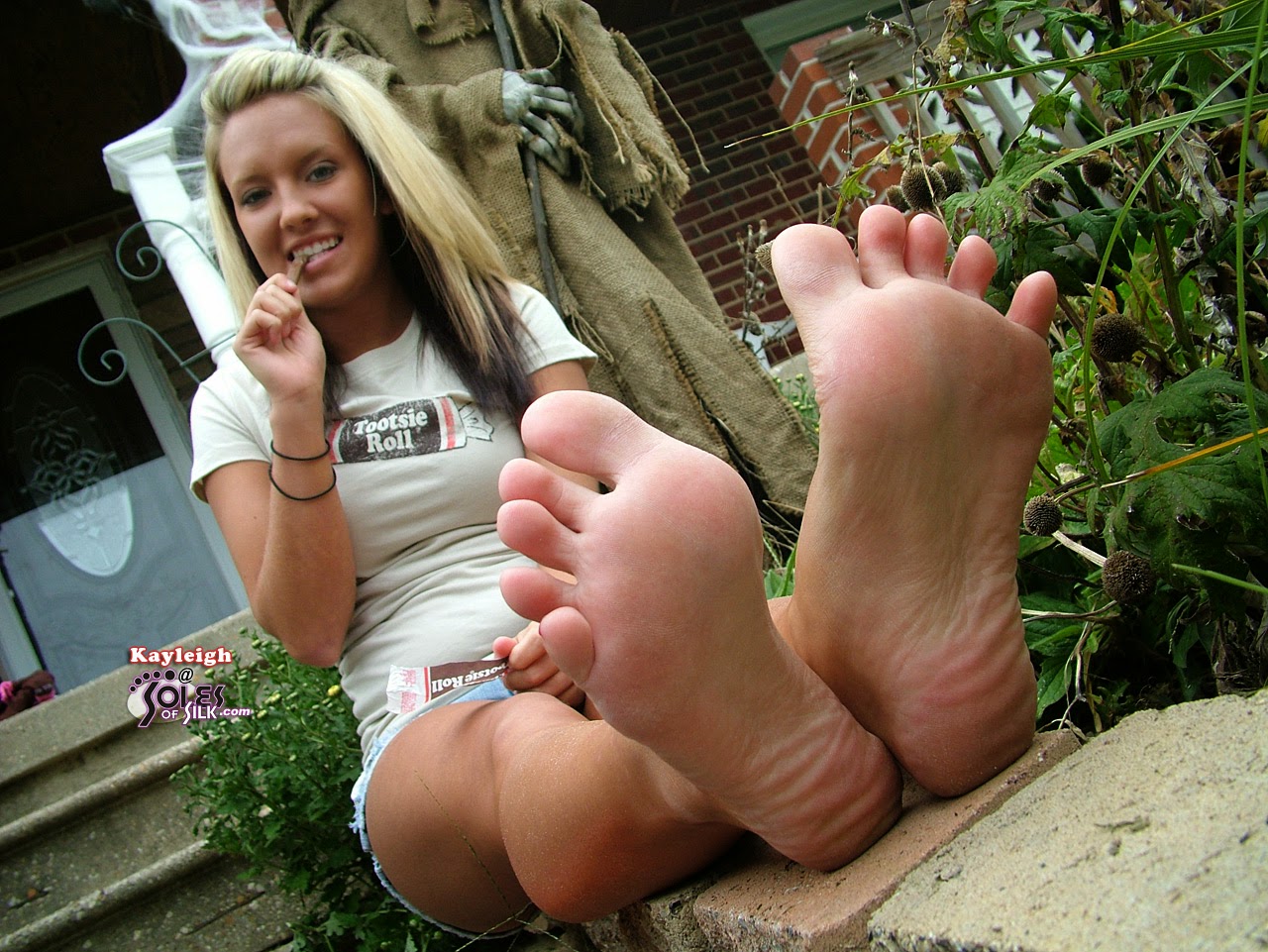 
Kayleigh couldn't wait to shoot for Soles of Silk, so much so, she did it on her 18th birthday. We did two Halloween themed sets, one with Tootsie Rolls and a Tootsie Roll shirt and socks and the other, with Blow Pops and a Blow Pops shirt and socks. Both sets were awesome and marked the first time I had a model debut and then be the very next week's update as well.

The Tootsie Roll set was the first one we did and people loved the whole "tootsie" reference for toes with the candy of choice. Of course they loved the socks and her shoving them between her toes as well.

The Blow Pops set was the second set and also one that so many people came to love. It was just so colorful, cute, and full of Kayleigh's fun loving attitude.

Having these two sets kick off Kayleigh's debut on the site sure gave her a lot of fans immediately - something that has never changed over the years since. 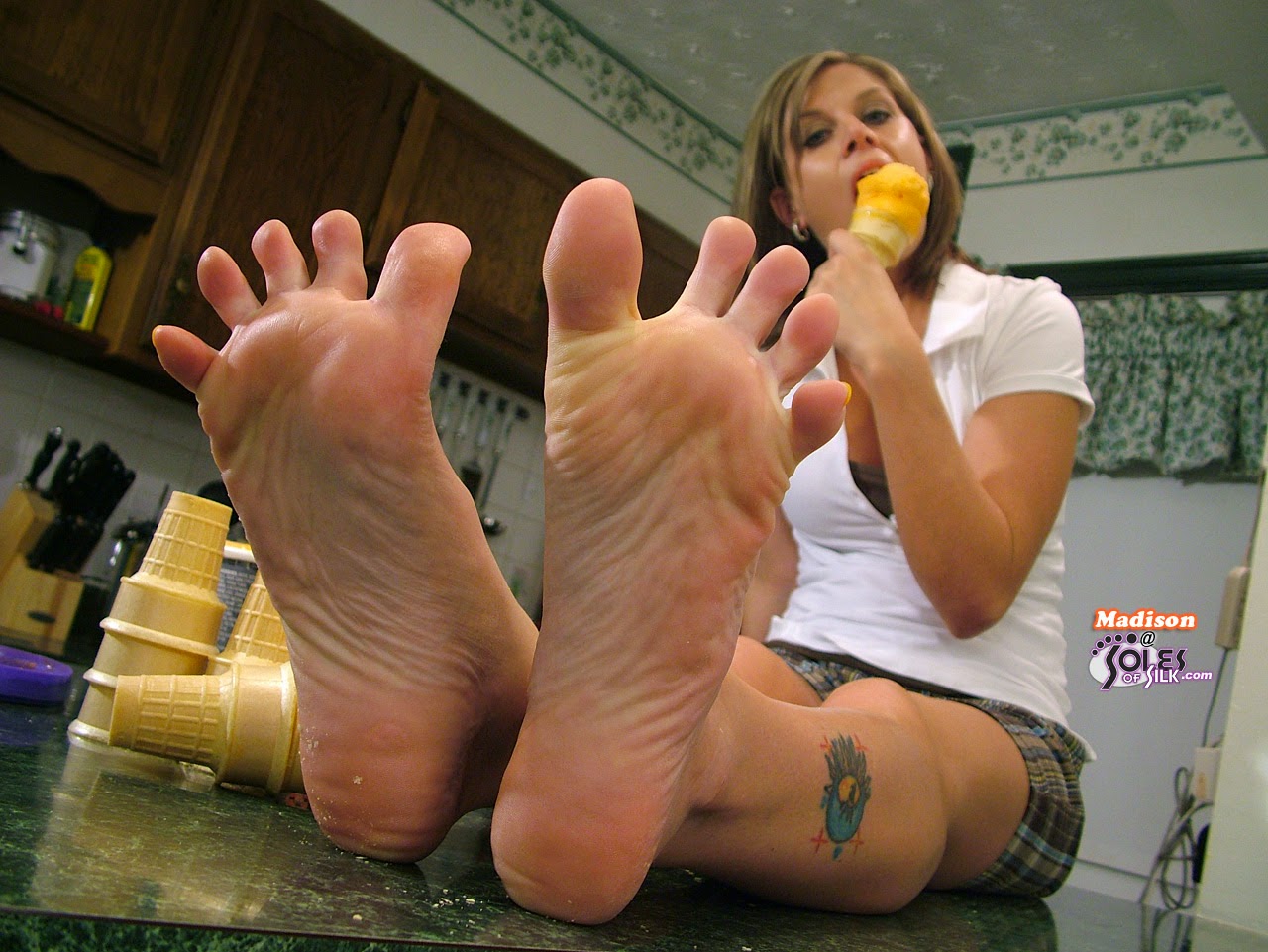 When Madison recommended doing ice cream I mentioned Amber's shoot, but suggested sherbet. She said perfect and I was off to the store on the way to her house to get some.

With this set I made sure to get in a lot of barefoot shots before Madison squished anything under her long feet. Once she did start the squishing, however, they more or less just glistened and got really sticky since the sherbet isn't milky like ice cream. The stickiness from the sherbet did lend itself well to having the broken cones cling to her feet though. 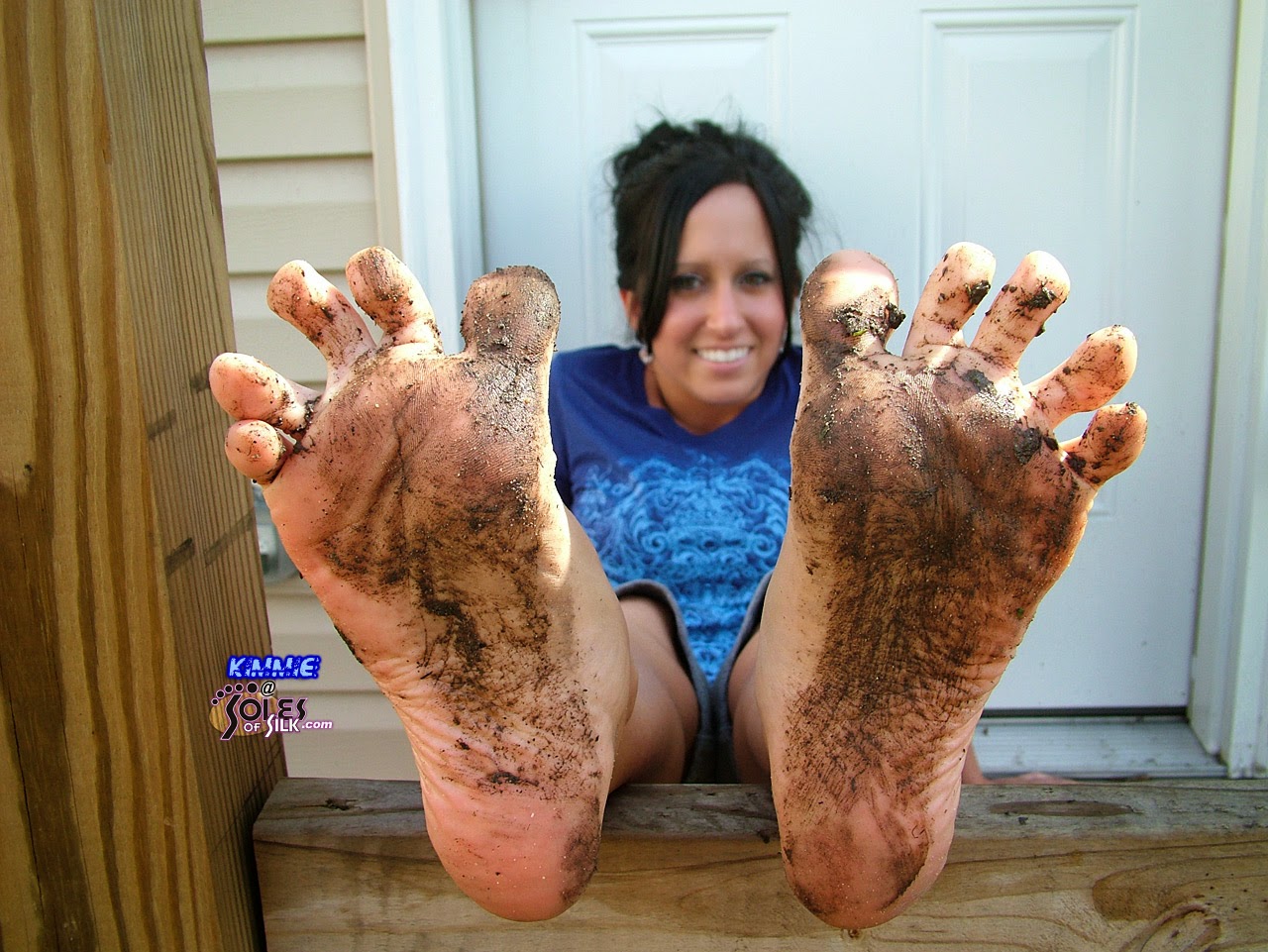 This set wasn't even a planned idea. I showed up to Kimmie's place to do some solo sets and it began raining right as I was pulling into her driveway.

Waiting to see if the rain would pass, since I wanted to shoot outside, we decided to do a set indoors while we waited. As we finished that set we saw a break in the rain, but the news said it wouldn't last long as more rain was headed our way.

We walked outside and saw all the mud around the garage and decided it would make for a great, quick set. Kimmie got changed and then squished her tiny feet into some really gooey mud. The poses, the bright blue shirt and colors throughout the set really popped. Her feet look so damn cute covered in the mud too. After we did the clip, the rain started to fall once again, so I call that a great use of time!

So what photo sets were your favorites from this year? I thank you for taking a look back with me at a little bit of this site's history. These 10 years online have flown by so quick!
Posted by Soles of Silk at 8:59:00 PM