I'm sticking with the criteria I used for the 2013 favorites as a guide for this series. Only sets that were published during that year will be featured, regardless of when they were shot. I'm also leaving out Wu's Feet Links Feature Model galleries. Only the sets published to Soles of Silk will be eligible. With that said, let's take a look at my favorite shoots of 2011: 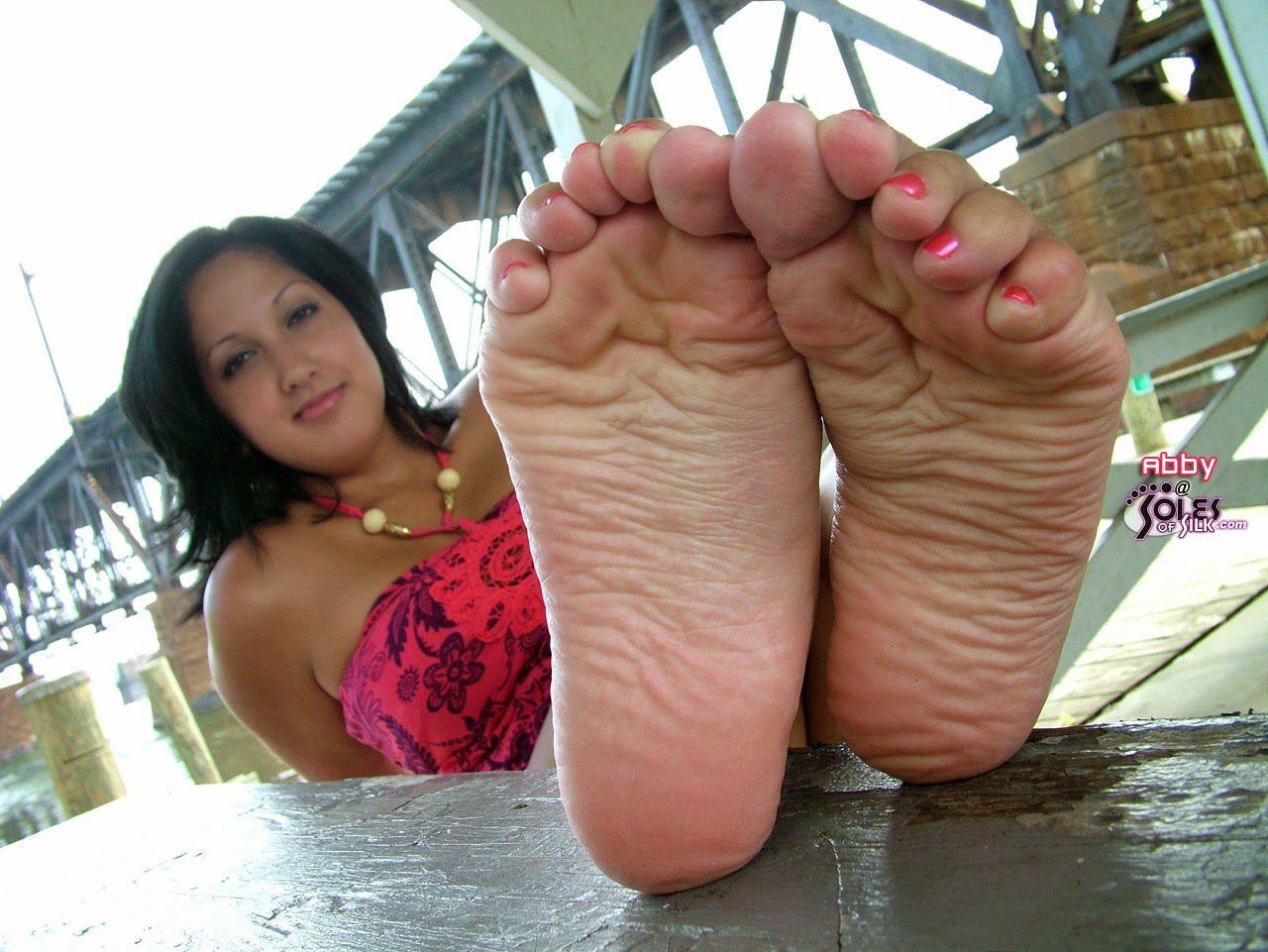 10. The Bridge by the Docks

It had been three years since Abby had done any sets for Soles of Silk. People were really missing her soft, wrinkled soles - as was I. When we finally got back together, we did a set I totally fell in love with immediately.

We went to a historic town and found a spot under a train bridge on some docks. Abby showed off those soles that so many of us had missed for way too long. I was so glad to have her back and so glad to show this set off to the masses! 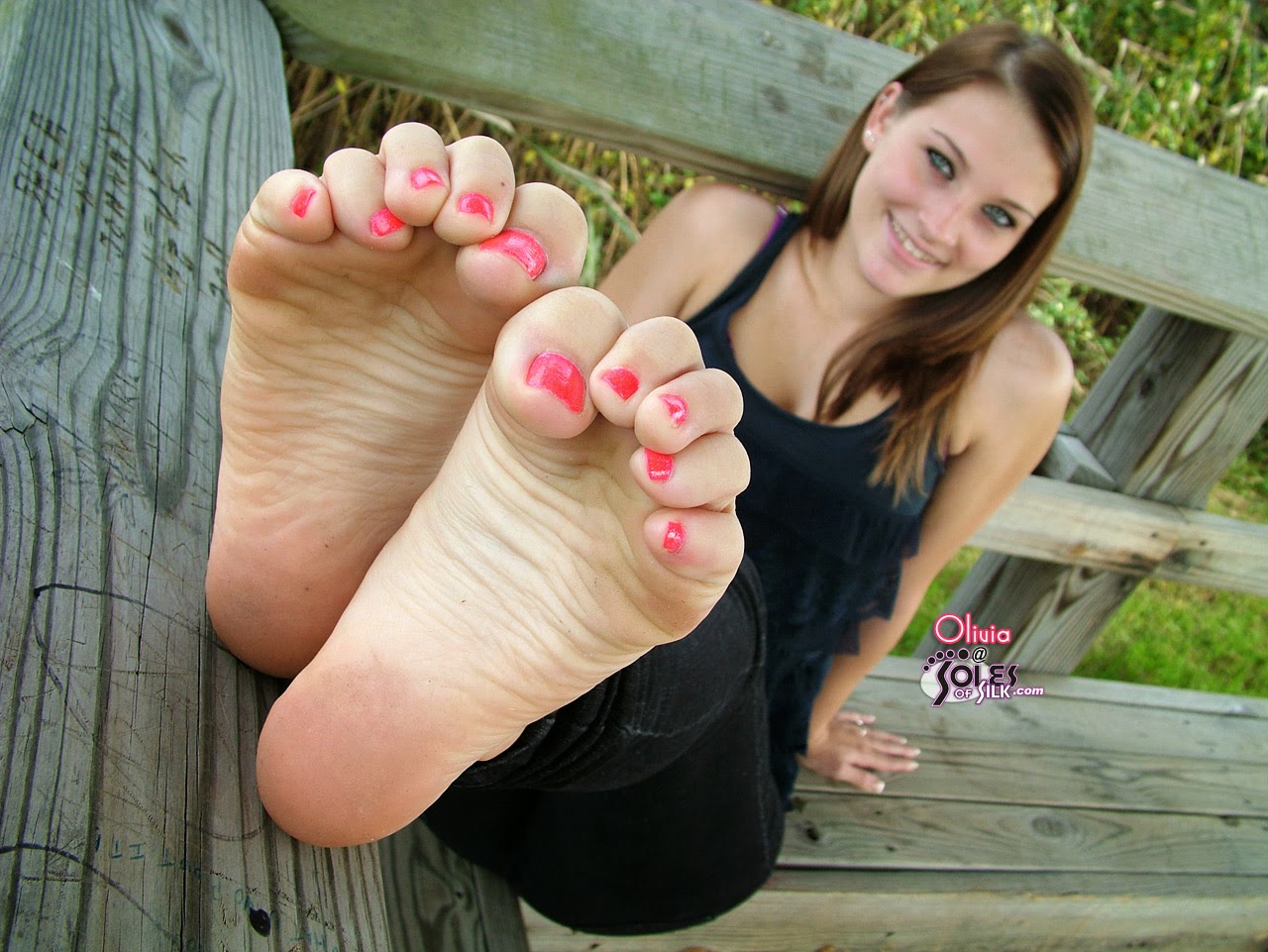 Olivia makes this list with one of the sets she shot on her very first adventure posing for Soles of Silk. This was the second set we shot on the day. It was a simple location we found looking for one more area to use, so no real planning went into it.

She started off in flip flops and then kicked her bare feet onto the railing. The views I got of her feet were amazing and as she well knows, I fell in love with her heavenly feet that day. I've been her biggest fan since. 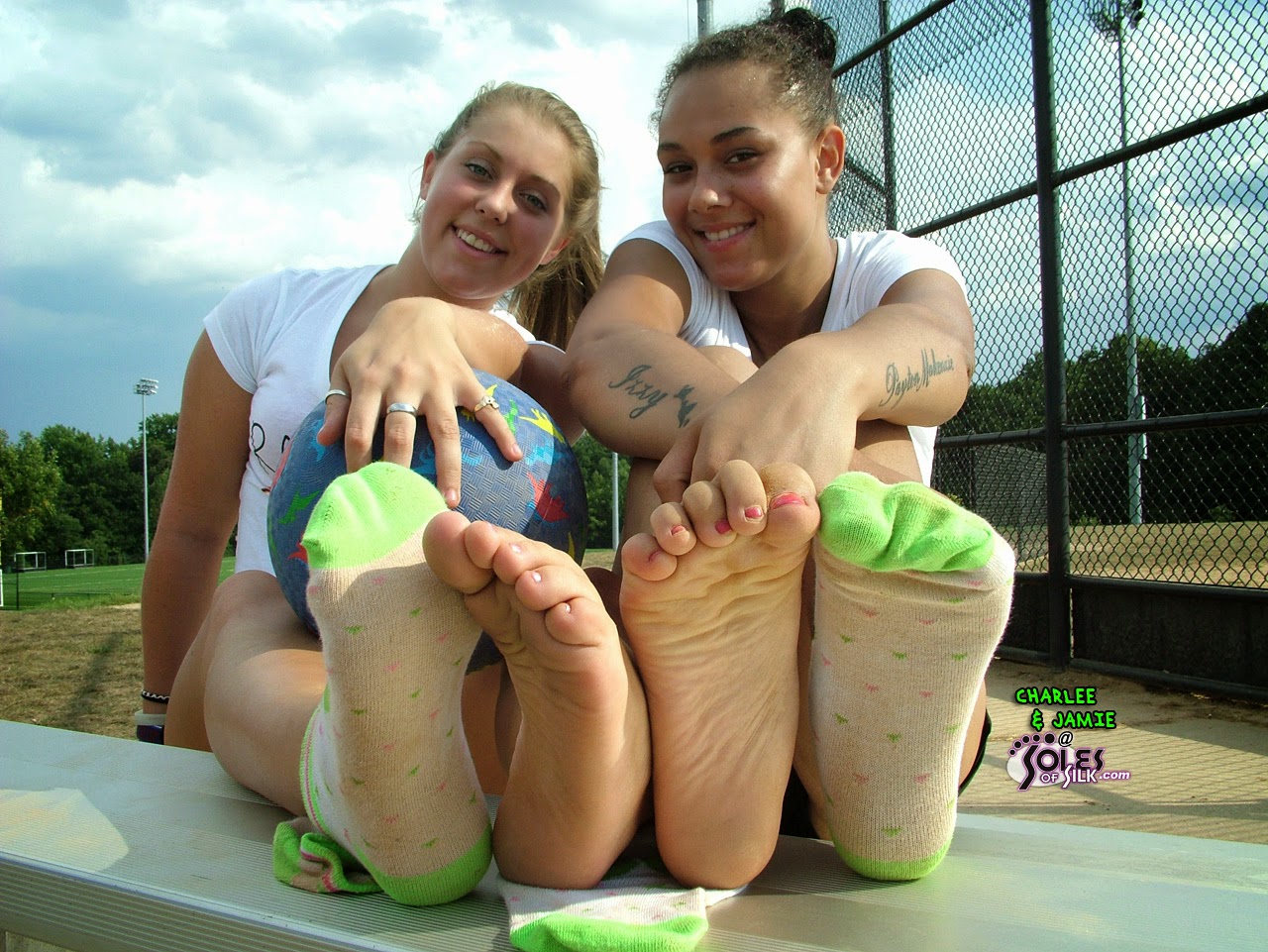 Charlee and Jamie were after me for months to do a set together. They ended up doing two sets together and this one was themed to one of my favorite childhood sports - kickball.

We picked up matching socks and shirts before we hit the field. I had both girls get their feet dirty right off the bat, which I believe makes this set the only one with dirty socks. Once the socks began to be pulled off though, the girls really began to have fun - tugging on each other's to get them off. So cute... So fun... 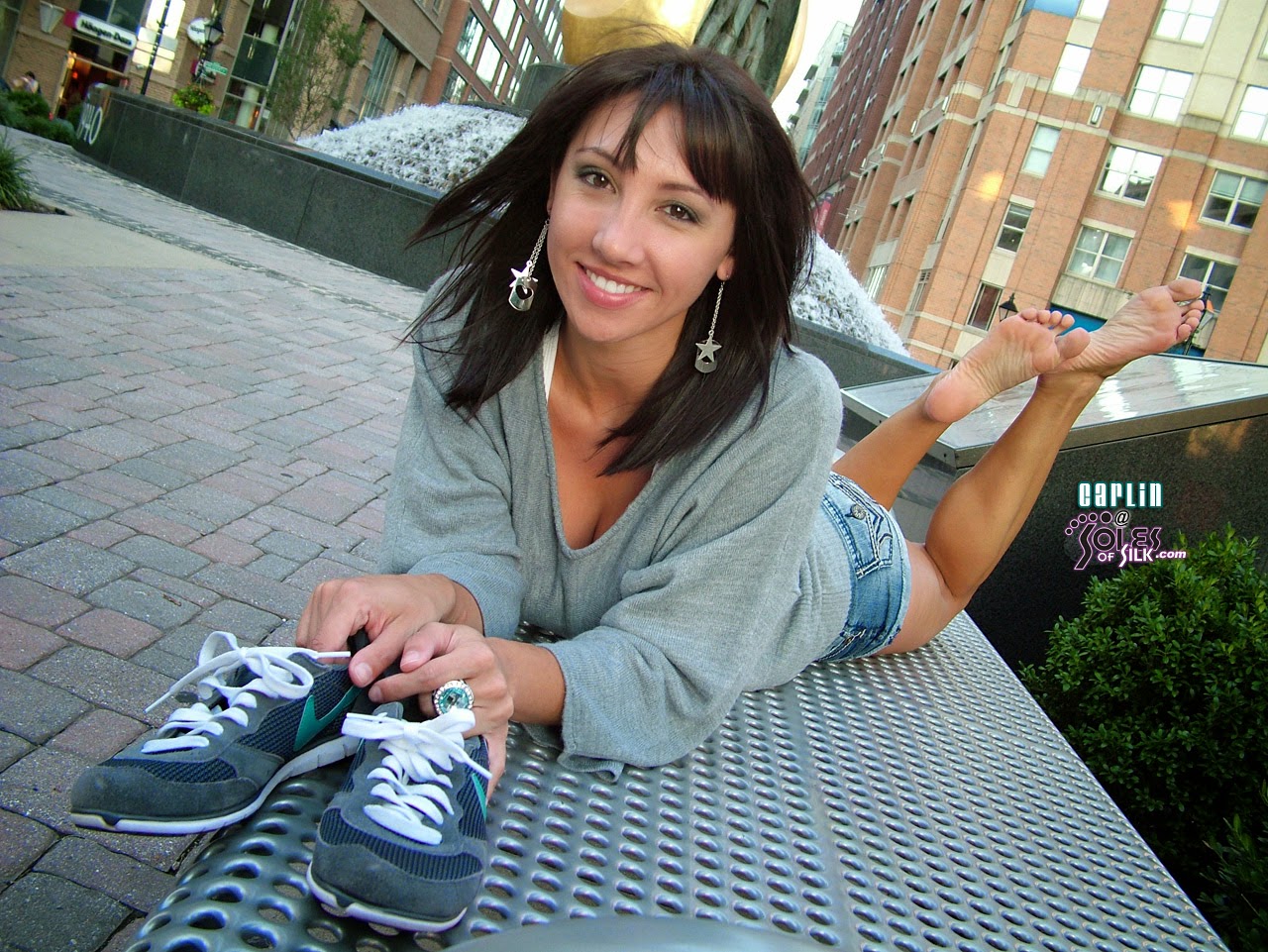 7. Feet by the Fountain

Carlin and I met up one day after I got off work to do some new photos. We went downtown and shot two different locations - this was the second.

Both sets that day involved Carlin wearing some tennis shoes without socks as I shared my passion for smelly female feet with her some time beforehand. She thought it was cute and brought a couple of pairs to use.

In addition to the shoe theme I love, the location we used for this set is so different than anything I've used. I've shot in the city before, but this location was smack dab in the middle of a roundabout that features a water fountain. People walked and drove by, checking us out. Carlin did her thing and showed off those adorable feet regardless and I got a set I just loved. 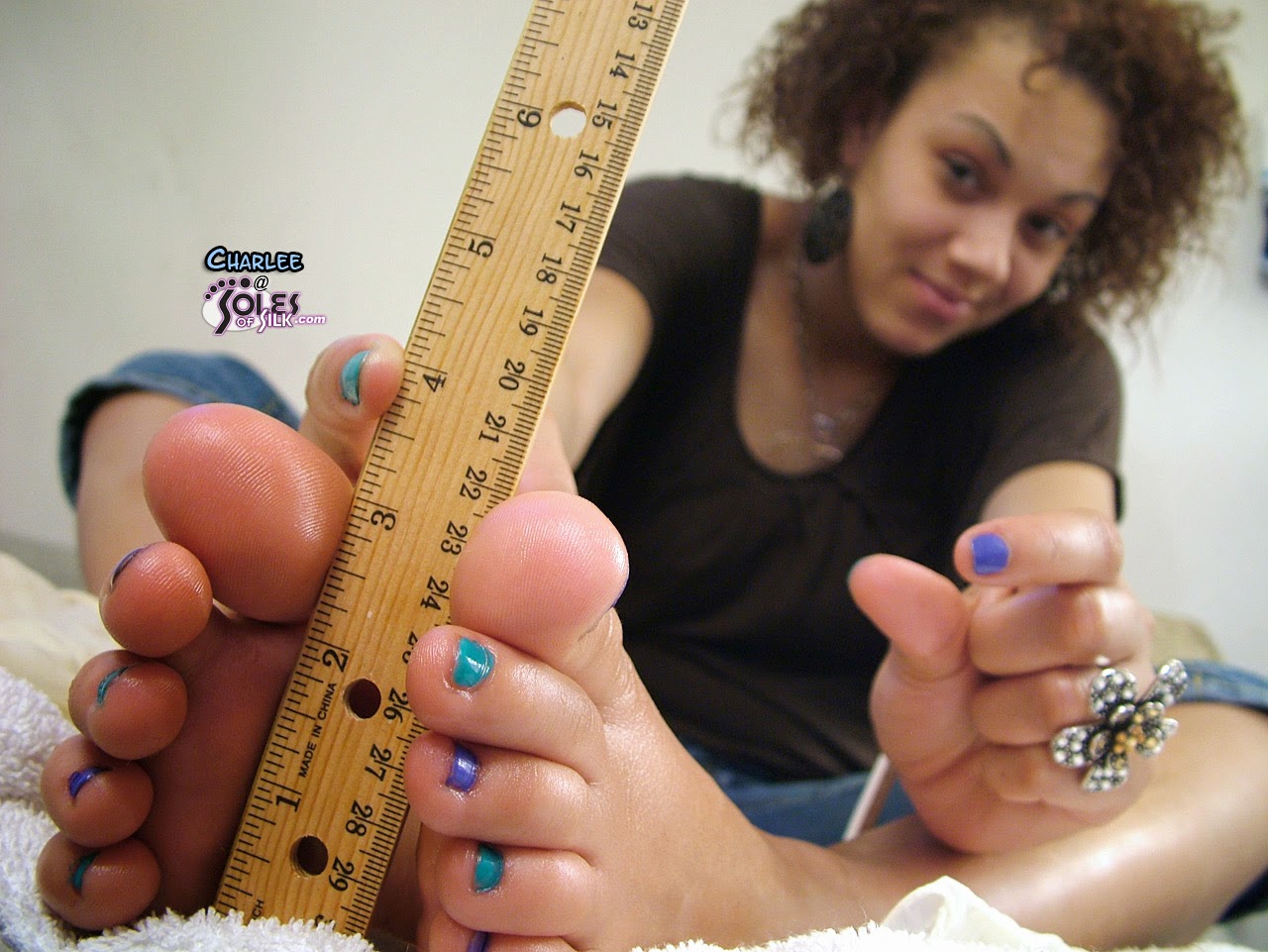 Charlee was very eager to do a size teasing set having seen the ones done by several other models on the site in the past. One day when I was walking around Spencers in the mall I saw some gag condoms and thought they'd be perfect. One of them was the size of one a little finger and the other could fit all the way around a fist.

I sent a snapshot of the condoms to Charlee and she pretty much told me to buy them. She wanted them for her set, so I did as I was told. When we finally got to shoot it, Charlee was in great spirits and as teasing as ever! She really let me... I mean, all the small guys have it in this one. 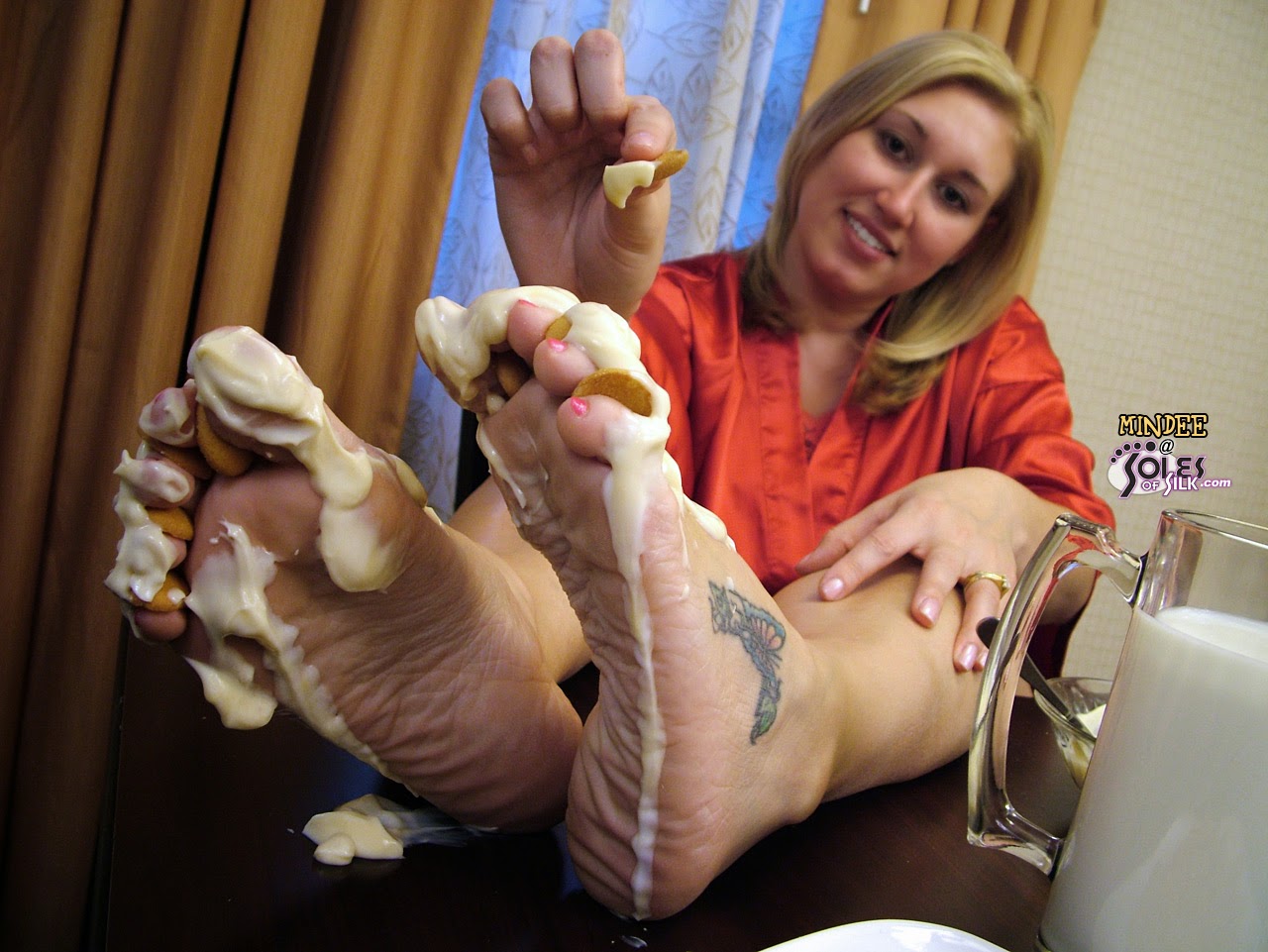 Mindee debuted in 2004 when the site launched. She didn't do a food set until 2011, which is totally surprising. It wasn't because she didn't want to, we just never did.

All I have to say is Mindee dribbling that pudding down her toes and soles was one of my favorite experiences shooting this amazing friend. I can't tell you how many times I stuck my finger out to scoop off some of that pudding off her feet to enjoy it myself. And the cookies between her toes were all mine to eat - according to Mindee. 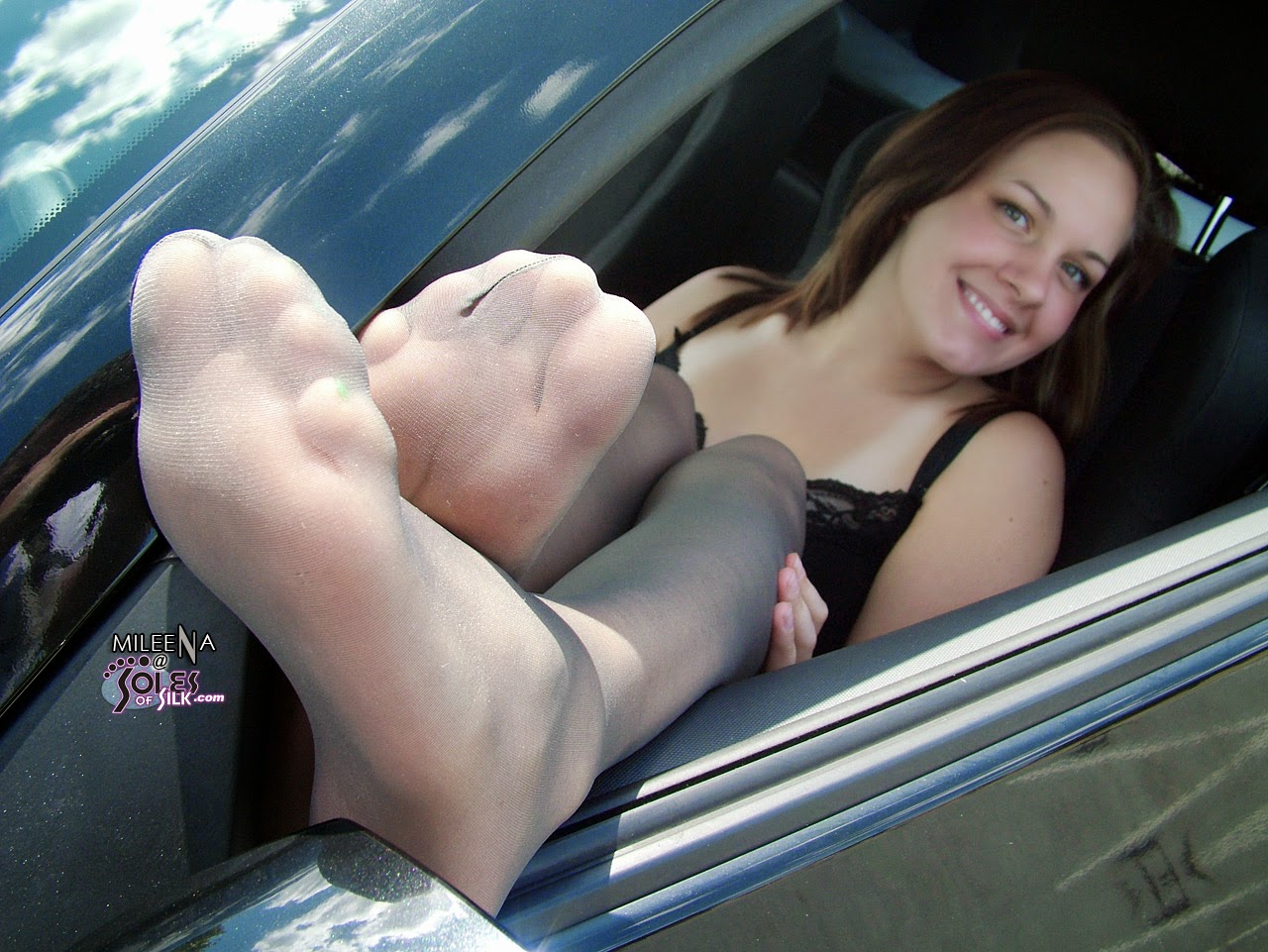 I had asked Mileena to pose for Soles of Silk for years. She finally agreed to do so, but had the condition that she got to do a set with my car, a black Nissan 350Z - one that she's mad that I just sold.

Anyhow, I asked if she'd mind doing the set with some black thigh high stockings. She thought about it and agreed. All I have to say is it was great watching Mileena show off her tiny adorable feet, both in stockings and without. Mileena has posed for so many great sets and she didn't waste any time doing them on her very first day posing. 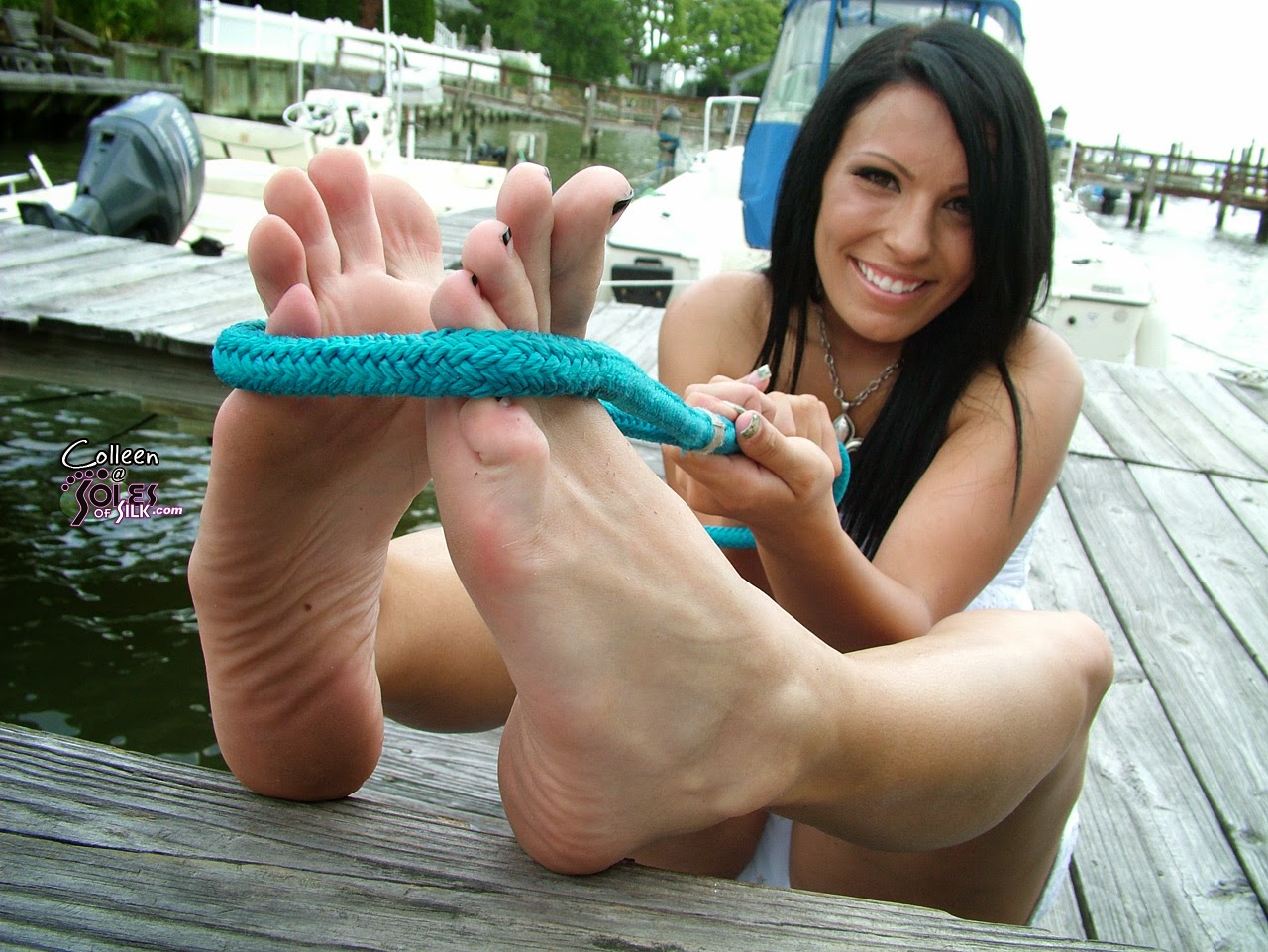 This set was actually shot immediately after Colleen's motorcycle set that was named the #4 in the "Soles of Silk 10 Year Anniversary - My 10 Favorite Sets: 2010" blog entry. Since it takes me some time to get sets online since I shoot in bulk, this set ends up making the list in 2011 since it was published in May.

We hit up a marina and posed all over the docks and on a porch. Colleen's feet looked amazing, as did the rest of her body in that little white dress. Top it off (or would that be bottom it off?) with those black toes and it was a set I just loved - as did everyone who saw it.

Between this set and the motorcycle set from the previous year and Colleen's stock shot straight up making her immensely popular. 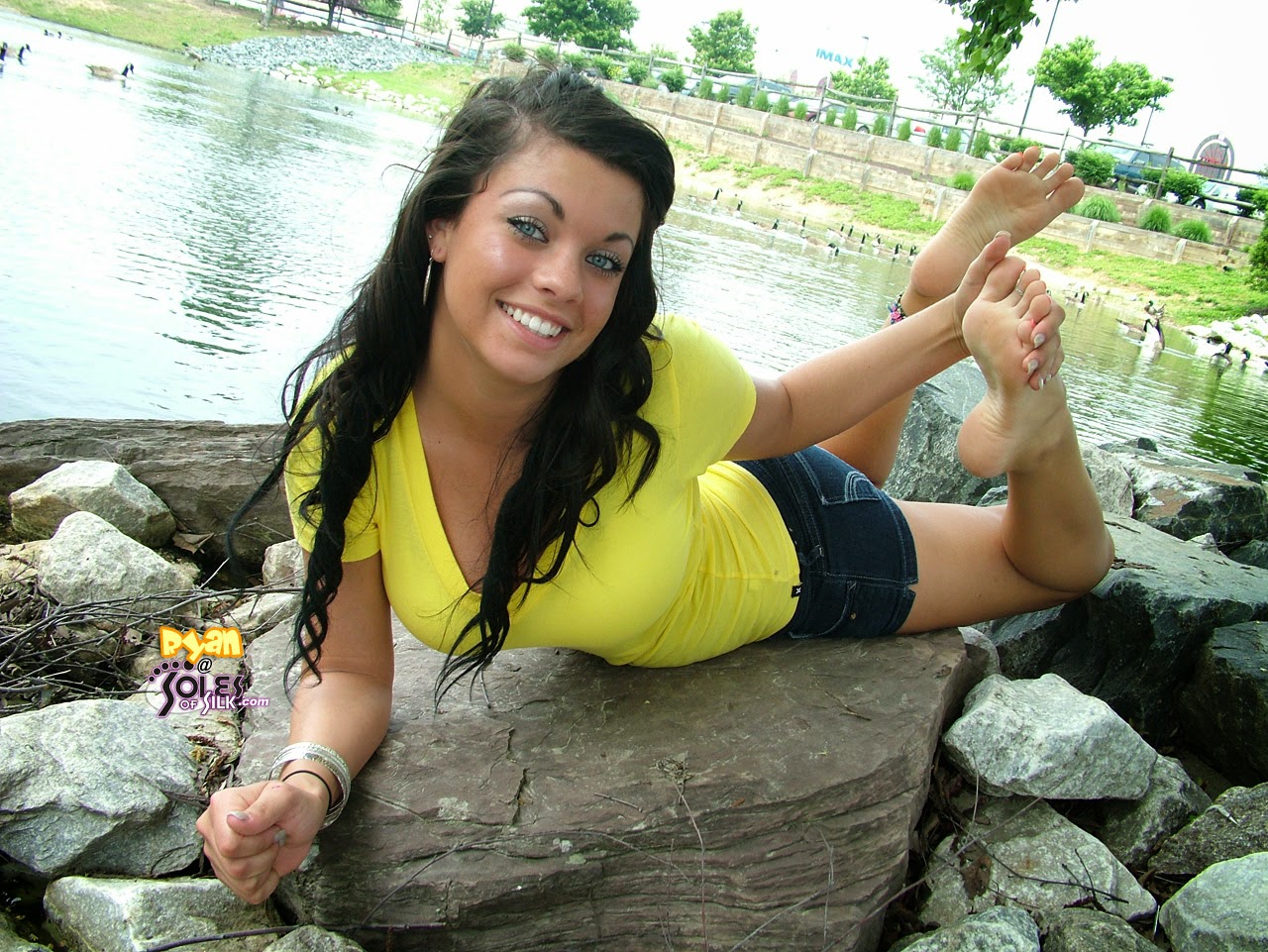 Shooting Ryan was perhaps the site's biggest kept secret. She had turned 18 and was waiting for me to shoot her only because the plan was to debut her in a Wu's Feet Links feature set, which turned out to be the "Sexiest Catch" feature at the end of June.

The following week I debuted her on Soles of Silk in this set we did by a pond, which I'd later use in Mileena's set above - well, the near by parking lot, anyhow. This set almost ended up being the feature set as Ryan and I shot a few sets and were debating on which one we liked best. It ended up being the fishing set, but this one was a close second and one of the favorites I did in 2011. 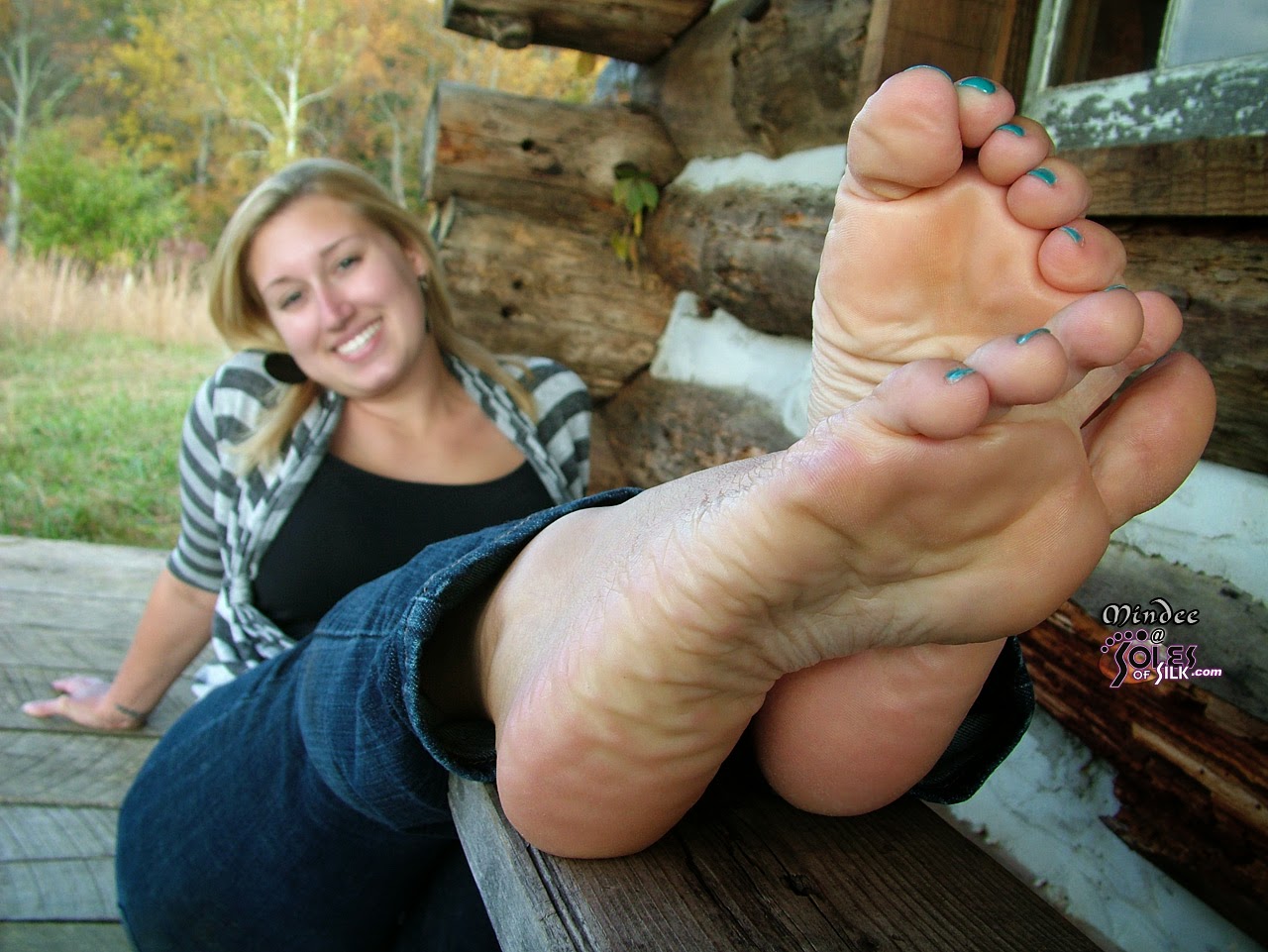 Mindee and I went to a park I used to go to as a child to catch turtles. We did a set down by the water, but I had also thought about using another location at the park I had never really been to before.

On top of a hill sits a small log cabin I think the park uses for storage. No one was around that day so we decided to use it. Mindee wore Ugg boots and some socks for the set and watching her take them off provided some of the best sole shots I've taken of Mindee, or any other model. And those teal toes... Such a simple set turned into one of my favorites for 2011 and of the site's entire existence.

So what photo sets were your favorites from this year? I thank you for taking a look back with me at a little bit of this site's history. These 10 years online have flown by so quick!
Posted by Soles of Silk at 10:05:00 PM