Well, the day before with Mileena had been great, but long. I had gotten up at 6 a.m. and didn't get home until almost 1 a.m. the following day. To say I crashed when I hit the bed would be an understatement. Still, I got up around noon and sent Kellie a text. I asked her when she would be open to shoot. After a while she responded that she had a wedding to attend in the evening, but had to get ready prior. Knowing I had Sunday open, I asked her if it would be better to just wait until then. She said yes, so that's what we did. It also gave me a chance to unwind after the previous day.

Once I was up and situated on Sunday I told Kellie to let me know when she was free to shoot. She told me she was the one who had a long night this time, so we planned on getting together around 1:30 p.m., instead of earlier.

When I picked Kellie up, like Ryan a few days prior, she was dressed in a very pretty dress and had her nails, both fingers and toes, painted silver. I had been itching to do silver nails for a while, so that made me happy.

We only had three hours before Kellie had to be back, so we got in the car and I began driving to a place Kellie wanted to use. Well, it turns out that spot was the exact spot I shot Jessie a few weeks ago. I kept driving and went to a place I know from shooting Carmen years ago, and recently Olivia. It's a historic mill with some additional old stone buildings. Carmen used one of them, shooting at the Blacksmith Building. That same day, Carmen also shot where they had closed a portion of a Bridge where they were building a foot bridge. That foot bridge appears in the background of Kellie's first set, and is also the same stream Olivia shot along when she did her Covered Bridge set earlier in the year. 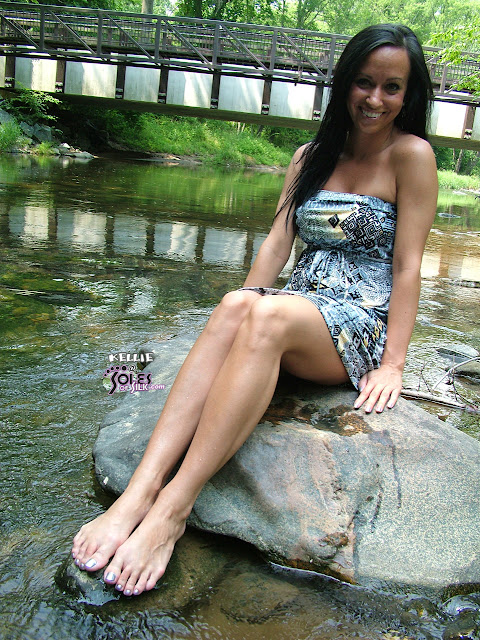 Set 11 of the Week - Little Gunpowder Falls
Since Kellie had wanted to shoot at the stream location Jessie used (set still unpublished), she was quite happy we had found this spot. There were quite a few larger rocks along the shoreline that we used. I made sure to keep the bridges in the background as I thought it was much more interesting than shooting the other way.

Although it wasn't as hot on this day as in the days prior, it still was hot enough. Kellie even joked that if I see sweat in the pictures to just tell everyone she had went swimming in the stream.

After the set we made our way back to the car. Kellie grabbed her bright teal dress and went behind a wall to get changed. I teased her that I should just shoot her changing as the set would be awesome. She agreed that everyone would probably love that one. I know I would have! 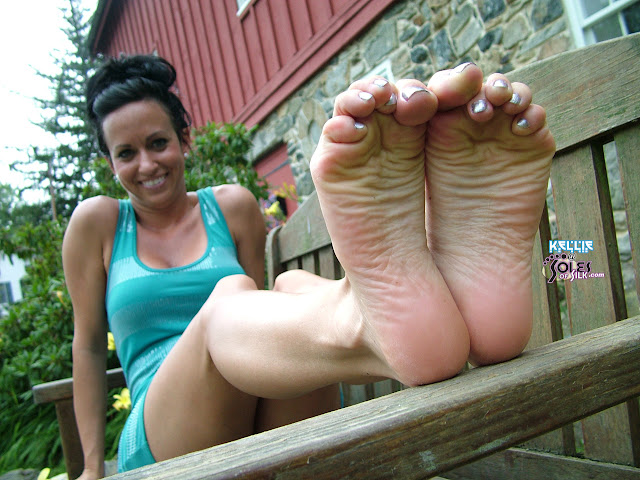 Set 12 of the Week - Jerusalem Mill
The second location was only a few hundred feet away in front of the mill itself. Being bright red and having some flowers and bright plants behind a bench on the grounds, we decided to use it. We didn't have a bunch of time left, so I just told her to stick her soles out and I began shooting away.

We got countless shots of those slender soles, but I kept making sure her silver toes were included. I really did love this color. With Kellie being tan, it just popped nicely. She also had me pluck one of the flowers nearby and posed her feet with it toward the end. It made for some cute shots.

After this set was done, we were both a sweaty mess. Kellie had to get back home and I had to figure out what my plans were for my final day of vacation. I was supposed to go to Knoebel's park with a fellow roller coaster loving friend, but on Thursday I tweaked my back. Although I was able to be mobile, I was scared bouncing around on those wooden roller coasters might not be the best of ideas. My friend agreed so we decided it best to wait and go later on.

Having the next day now free, I sent a text to Nikki. She had asked me if I had Monday free a few days prior and offered to shoot. Since I originally had plans for the amusement park, I had to decline. Now that I was no longer going, I asked her if she still wanted to shoot. She replied she was free in the morning for a few hours, so I booked her. Then I figured, why not see what Olivia is up to later in the evening. I sent her a text and after some small talk, I had plans to shoot her the following day too.