Well the results are finally in and this contest saw a good number of people participate. This wasn't the easiest of contests, although people sure cleaned up on some points in the early questions. It was the later questions, however, that threw most people for a loop. And speaking of a loop, the roller coaster question totally killed everyone. No one got that one correct, although one person only missed by one - and I'm certain I know which coaster was missed as only a small portion of its track made it into a photo in that particular set.

Overall, people did quite well with this contest. The average score was a 71 out of 100, with each question being worth up to 10 total points. Originally, I wasn't going to give out partial credit, but I quickly found that by not doing so, it grouped everyone with similar scores. So what I did was take questions with multi-part answers and awarded partial credit for anything answered correctly. I also deducted points if items were answered incorrectly. Please see each question to understand how it was scored. The red text will show the correct answer and the blue text, how well everyone did on that particular question and an explanation of how it was scored.

Now, onto the contest answers and results:

Questions
1. Fill in the following blanks with the names of fellow Soles of Silk models who are related to Mindee in each of the following ways:
100% answered this correctly - scored as 3.3 points per correct answer, with the final .1 point added for getting them all correct

100% answered this correctly - scored as all or nothing 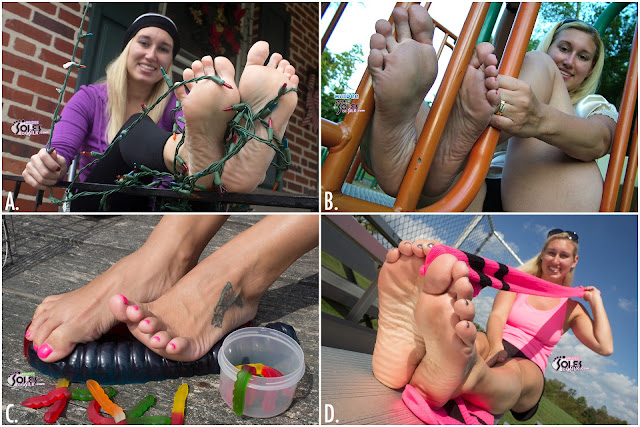 4. Based off the image above, which photo sets inducted Mindee into the following clubs?
85% answered this correctly/15% received partial credit - scored as 2.5 points each

0% answered this correctly - scored as all or nothing

8. The largest ball found in Mindee's Blue Balls set was what kind of ball?
Tennis Ball

62% answered this correctly - scored as all or nothing

9. Including all the sets I've shot and previewed on the Soles of Silk Blog this year, list every model who has ever appeared in sets/video clips with Mindee. (No need to break them down into set vs. clip - just list all of the different models.)
Marcy, Emerald, Cierra, Mariah, Rilynn, Noelle, Reese, Rein, & Kelsey

10. Mindee's pretty feet have found themselves playing with a number of food products since her debut in 2004. Of the following list, which foods can be found in Mindee's sets?

38% answered this correctly/62% received partial credit - scored as 1 point each with 10 correct answers giving the 10 points, any incorrect answers were given -1 point to stop people from just checking all of them