Timeline - All Day Shoot with Cierra

This past Sunday I woke up and got myself ready to go pick up Cierra for a day of photos. For the last month or so I have been looking for a hot tub or old style bathtub for Cierra to do the site's Valentine's Day set for 2010. I wasn't having too much luck, but did find a hotel that featured a room with a heart shaped jacuzzi. When I asked Cierra if she'd be up for doing the set in the hotel, she said sure. I told her we should just make use of the room and the day we had it and do a bunch of sets. She agreed.

So here I was driving to pick her up. It was about the most miserable day outside with it raining and fog thicker than any I've seen. It really looked like what came off the water in the movie, "The Fog." Anyhow, I picked up the now brown haired Cierra at her place around 1:00 p.m. and packed my small car with more stuff than it could fit. Here's a timeline of our trip:

Sunday, January 17
1:00 p.m. - I picked up Cierra and it was pouring down rain. My car has little to no trunk and I already had a few things in there including my photo lamps, camera, laptop and some clothes (we were staying overnight). Cierra, who I asked to bring a few sets of clothes, handed me a luggage bag that I didn't think would fit into the car. We made it fit, however, and jumped in the car.

1:30 p.m. - Before we got on our way to the ocean front hotel I had booked, we needed to pick up a few things. We were also hungry so we stopped to grab a bite.

2:00 p.m. - After eating, we went to the mall to buy Cierra a pair of thigh high stockings and high heels. It took us a while to find a good pair of shoes, but the stockings we grabbed right away from Victoria's Secret.

2:40 p.m. - Finally on our way to the ocean, we left the mall parking lot and got ready for the three hour drive. We couldn't believe the amount of fog outside. Having to go over a few bridges on the way, there were some areas that just looked spooky!

5:20 p.m. - Finally in our room. Cierra tells me she has to take a few minutes to paint her toes and shows me a few colors she brought with her. Saving the jacuzzi set until the end of the night, I picked her metallic teal color for the first few sets. Still needing to pick up a few things, Cierra told me that I should go grab them while she did her nails.

6:05 p.m. - I head to a nearby grocery store to get some bubble bath and rose petals for the jacuzzi. I also wanted to get some blueberry pancakes and syrup for a food set. I thought that since she did the blueberry pie set years ago, it would be a cute little homage to the past.

6:30 p.m. - I'm walking around this grocery store with the pancakes and syrup, but there is no bubble bath or rose petals to be found. There were only two employees in the store as most of the resort town was closed for the season. I paid for the breakfast items and went looking for another place.

6:45 p.m. - A 7-11 and two grocery stores later, I found both the roses to pluck and bubble bath. I paid for everything and headed back to the hotel.

7:00 p.m. - I really wanted to have shot some sets by now, so I was glad to get back. I went into the room and Cierra had gotten dressed and was looking really cute. She showed off her toenails and I loved the color. She brought a pair of silver heels out of her bag and asked if she could wear them. I said sure and began to set up my photo lamps.


7:15 p.m. - Cierra is sitting in a chair in front of the balcony looking totally sexy. Her heels gave her some major toe cleavage. I explained what toe cleavage was and she thought it was funny, but cute.

7:45 p.m. - We finished up our first set and were both hungry. We went out to a Green Turtle and got some much needed food.


9:00 p.m. - Already 9 o'clock and we had one set to show for it. Cierra said it was going to be a long night, but we both said we couldn't wait to do some more sets. Before we went to the Green Turtle, Cierra had put on a pair of socks. We decided to make use of those. She put on some comfy clothes and jumped on the bed for a lazy themed sock set.

9:30 p.m. - Cierra is in the bathroom getting dressed for her first ever baby oil set. I clear off the dresser where she'll be doing the set. 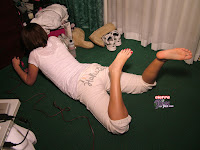 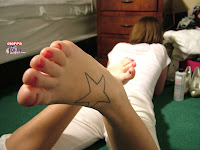 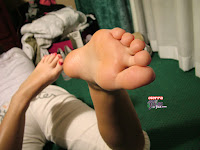 10:30 p.m. - I snap a few photos (the ones above) and then put the camera down for a nice little foot massage. Cierra just relaxed and I rubbed her little feet. Her feet were really sweating the entire time. I teased her a little about it, but told her I really love it. She told me she has no clue to why they sweat so much. I laughed and told her I'd Google it one day and find out some possible reasons. Seriously, her feet felt so wet - like someone rubbed a wet sponge over them every few minutes.


11:30 a.m. - Cierra sits up on the kitchen table with a plate of pancakes nearby. Those feet sure got sticky and by the end of the set and videos, the pancakes and syrup were just a big pile of mush.

Monday, January 18
12:15 a.m. - I'm on the bed plucking rose petals and filling up the jacuzzi with water. Cierra is also on the bed watching television. It was hard not to stare at those bare soles, even though I was looking at them all day.

12:45 a.m. - Cierra has finished getting dressed into a cute little outfit she brought with her, along with the heels and stockings we picked up about 12 hours ago. She looked so cute.


1:00 a.m. - Cierra is dipping her nylon clad legs and high heeled feet into the bubbles and water.

1:30 a.m. - Cierra is literally hot with the tub being full of hot water and the photo lamps looming overhead. I told her to get her hair wet and turn on the cold water.

2:45 a.m. - Cierra says she's going to get into the shower before bed. I drain the tub and start cleaning up and organizing our stuff.

3:30 a.m. - I jump in the shower real quick and leave my laptop on the bed for Cierra to look through the photos.

4:15 a.m. - Cierra is about to crash and says good night. I stay up looking through some more photos. I really like what I saw, which isn't a surprise as Cierra always does some amazing work.

9:45 a.m. - Damn alarm goes off. I feel like I haven't slept and have a three hour ride home to look forward to. Oh well, at least I'll have Cierra to chat with the entire time.