The year 2020 has been such a drag for obvious reasons and it has taken its toll on me. Between all that and my full time job that I had worked for over two decades, I had never felt so down and out before. I felt dragged down by everything and even got to the point where I felt like updating Soles of Silk each week was a chore. I've never felt that way in the 15-plus years that I have ran this site and I hated it. I've always gotten so much joy out of my shoots, running the site, and interacting with all of you. None of that seemed to be happening for me for most of 2020.

As many of you know, if you're still coming to read my blogs, I haven't been blogging anything other than the update posts. I always used to do spontaneous blogs talking about what site news, some fun facts on my models, but most importantly, I'd blog about my recent shoots I had done. Well, this year I've shot one total time, getting in two sets with Kaycee. That was back in March, which feels like an eternity ago now (see blog: "Monday's Shoot - Kaycee").

With that being the case, I am so lucky that I've always had the mentality to shoot way more content than I'd ever need. I thought that it might come in handy in case of an emergency. I figured that emergency would be something like, say a broken leg, camera issues, or not having too much time away from work. I would have never expected my photo back up would come in handy for something like Covid-19.

Never in my lifetime would I have even thought of needing to sit on photos for something like a pandemic. That's exactly what happened though and thankfully, I had those sets waiting to be used. I actually still have over 30 unpublished sets at the time of this blog. Most of them, however, are of Mindee. That's not a bad thing itself as I never grow tired of her and her size 8's, but I am running out of sets of the other models.

Speaking of lacking, the same holds true for video clips. I don't always shoot a clip with each set. It depends on if we're out in public, or other unforeseen circumstances. Again, I have more clips of Mindee than anyone here. I have been refraining from publishing all the clips too as I felt like I might run out. I also didn't want to have a string of like eight clips of Mindee, if I could finally get in some other shoots at some point.

Well, I am excited to say I think things are looking a little better. Obviously, 2020 still sucks and who knows when that will get better. On the Soles of Silk end however, I have some good news to share. But first, a little bit more of some bad news that has helped lead me to this good news for the site.

You might have noticed I used the word "worked" when referring to my job in the opening paragraph. Well, that's because I resigned at the end of July. I found out some things I didn't like and really hated the stance that was taken with me when it was discussed with ownership. I ultimately felt like unless I lived my life for that job and nothing else, the owner would never be happy, which he probably still wouldn't be anyhow. I was working six days a week, so even without Covid looming over everything, my schedule was tight to shoot to begin with.

Ultimately, I decided it was time to go and enjoy life for a bit. I've worked on some quality of life things, such as seeing my family and friends, going out to eat, and doing some little day trips. I feel like I'm in a much better place. That's why I recently reached out to some of the models of the site to see how they're doing and if they're interested in shooting again. 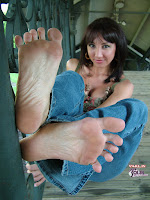 Now that we're months into this pandemic, some people are more comfortable to be around friends, go out to eat, etc. In the last couple of days, I reached out to numerous models, some of which haven't shot in years. I heard back from a number of them and some of these names may surprise you and make you happy to know that they want to make a return. The models who have gotten back to me and want to shoot are as follows: Allie, Ava, Carlin, Carmella (planning to shoot Sunday), Cierra, Jasey Rae, Kaycee (shooting tomorrow), Kayleigh, Leah, Melani, and Mindee.

Over the last few months both Felicia and Reagan have also expressed that they'd shoot whenever I was ready. Then there was also Audrey and Bria wanting to shoot with another one of their sisters. I haven't heard from Audrey in a few weeks, but they seemed really excited to make that happen (see blog: "Soles of Silk's Sisterhood Trio?").

In all honesty, this sort of thing has always happened whenever I reached out to a bunch of the models. I get a bunch of people saying they want to shoot and some will cease to respond after a few days, or will never have an open day. So far, I have a positive outlook on those shoots, but time will tell.

To say that I'm happy to finally be getting back into the swing of things is an understatement. I hope to be having some regular blogs popping back up here soon showing you the sets that I've shot. It will be nice not to have the blog filled with only site update posts as it has been this summer. Being so down and out these last few months just left me with no motivation to sit down and blog. Plus, I felt like I'd only be blogging about how I wasn't shooting, how 2020 sucks, etc.. I hope you all understand and hope you and your family are doing well at this time. Here's to a better end to 2020, at least as far as this site goes!